Yet Another Fort McMurray "What Not" Rant

Well people, in this blog I've covered Fort Mac's version of what not to wear, and what not to put on your truck. I had sincerely hoped that it would end there and I wouldn't be compelled into another of these "what not" rants, but there are some things you can't ignore, and that you'd have to be blind to miss. This time? It's what has happened to two apartment buildings in the city. I'm not talking about the architectural design but rather what appears to be an attempt to spruce them up. I have no issue with renovations and actually applaud those who refurbish older buildings - but in this case it's a jaw-dropping, eye-popping case of : was there a clearance on mis-tinted paints?!? 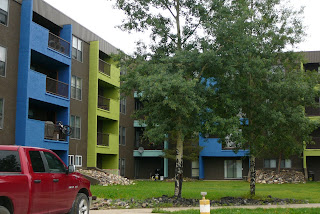 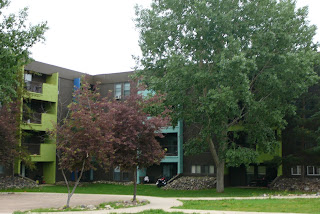 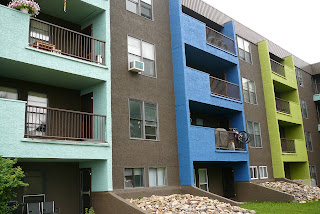 The first building is in Thickwood, just behind the Pizza Hut. This one actually doesn't look too bad, but I think one colour accenting the deep brown might have been a bit nicer. The accent colours chosen have a certain degree of richness, and the paint job appears fairly well done. I'm giving this one an "E" for effort as it doesn't assault the eyes. It just looks slightly off, but I think the intent was good and the end result not unbearable.


Unfortunately all the good things I said about the building in Thickwood cannot be said about the second building, and this second one is a lot more visible, too. It is situated right on Franklin Avenue, and all I can say is that when I drove by the first time and saw it the words that left my lips aren't ones I'm going to write here because my kid reads this blog. What in the name of god were they thinking? 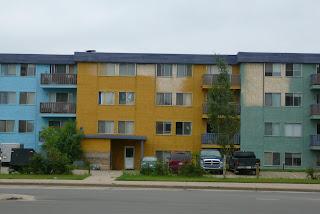 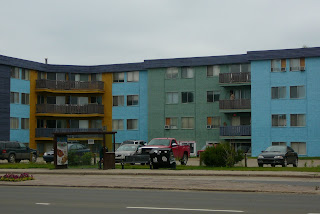 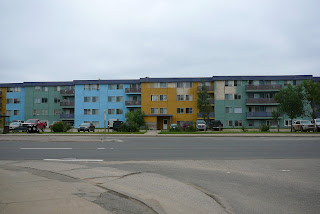 The best adjective for the colours is "horrendous". The paint job appears to be abysmally poor, and it seems they ran out of some colours before it could be completed. While the one in Thickwood could be argued to be at least a good attempt to modernize and spruce up an older building this one cannot be seen as anything other than an eyesore. I have no idea what the architectural controls are on buildings in the downtown area but if there are controls this might be a lovely time to exercise them before someone else decides they want their building to look like this, too.
When people come to our city from other places they form their first impressions quickly. I can't quite imagine what they think when they drive by this building on Franklin. I'm guessing they think someone has tried to pull off a cheap refurbishment, and they would appear to be right (sadly it was not a successful attempt and I think the building looked better in it's original state). If I lived in these buildings I would not be amused. While it would be easy to tell people how to find my place ("hey, just look for the building that looks like some demented and drunken version of an Easter egg!") I'm thinking coming home to this every day would start to really tick me off. Look, I'm not a design guru, and I'm no expert on building refurbishment, but I know ugly, people. And that building on Franklin? It's ugly. C'mon, Fort Mac. We can seriously do better, can't we?
at July 08, 2011