How Re-Usable Bags Saved Me 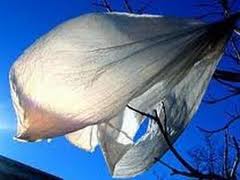 Well, people, apparently the good folks at the RMWB are in the process of evaluating the single-use bag ban. If you recall I wrote about this issue some time ago, and my thoughts haven't changed, really. I support the single-use bag ban, and I think repealing the bylaw or changing it at this point would be a step into the past.

Other communities are now beginning to enact similar bans. In fact I suspect it's just a matter of time before it's the norm as opposed to a rarity. I know that when I go to Edmonton now I always pull out a re-usable bag and I am always shocked when they hand me a plastic one. Or they will offer me a bag and I'll say no, that I can fit my purchase into another bag I already have, and they always look surprised - who would turn down a free plastic bag?!? When I return from these trips and empty my trunk I look at all the plastic bags and know that they are eventually destined for the trash, and it saddens me. I know that my re-usable bags are used for a year or so (or even longer) before they wear out while those plastic ones might have one or two re-uses and then they are done.  I know my household is contributing less to the plastic pile at the dump, and frankly I feel pretty good about that.

People who know me will tell you one thing - I am a shopper. I love to shop and to buy, and I have never not purchased something because I didn't have a bag for it. I would either buy a new bag, or carry my purchase to my car in my hands. When I'm determined to buy something (whether planned or impulse) a little thing like not having a bag is hardly going to stop me.

I know there are those who think it should be a choice, but I truly believe that people will likely always sink to the laziest common denominator, which means they will forego the re-usable and embrace the plastic again (not because they love plastic, but because it's easier). I know I would continue to use re-usable bags as it's what I grew up with (my parents grew up in Saskatchewan during the depression - the thought of bags you threw out was practically criminal to them). I just suspect that most people would slip back into the plastic habit and any forward steps we had taken would be lost.

Look, I know there is controversy about whether or not re-usable bags are truly better for the environment. All I can speak to is my personal experience. In the last year I have thrown out perhaps three re-usable bags - and prior to using them I imagine I threw out hundreds of plastic bags yearly. That ratio alone tips the balance in favour of re-usable for me.

Finally, I have a story about how re-usable bags saved my relationship with my kid. Bear with me, people, as it may seem initially that this has nothing to do with re-usable bags but you'll see where I am going.

A few weeks ago, the morning of the day I was leaving for vacation, I was heading down the 63 to drop the family dog and my kid's ferret off at the boarding kennel (big shout-out to Mackenzie Kennels, one of my very fave local businesses!). I was happily driving along, listening to The Smiths at top volume, when I looked down at the ferret's snazzy little zip-up pet carrier and realized to my horror that a small weaselly-head was poking out. The ferret, being quite the little genius, had discovered he could rip the zipper apart and escape. The family terrier, who was tied in the backseat, caught a glimpse of the ferret escaping from the bag and began to whine and drool (she has an uncomfortable relationship with the ferret, being a dog with a very strong prey drive). I was, quite frankly, well and truly screwed. I had the steering wheel in one hand, a struggling ferret in the other (and if you've ever held one-pound of struggling sinew punctuated with sharp teeth and claws you know how that was going), and a dog in the back seat who was rapidly losing her mind. I pulled over and tried to think what I could do. Clearly there was no stuffing the Houdini-ferret back  into the carrier now that he knew how to escape. Then I remembered - I had re-usable bags in the trunk. People witnessing this scene would have been amused to see a woman in a skirt and high heels emerge from her car holding what appeared to be a rabid weasel and rummaging in her trunk for a re-usable Safeway bag. Once I found the bag I stuffed the ferret back into the carrier, put the carrier into the bag, and tied it shut (okay, lack of oxygen for the ferret did occur to me but at this point a little ferret-hypoxia seemed rather enticing). This prevented the ferret from enacting a total escape, the melt-down of the family dog, and the agony my kid would put me through if I allowed the dog to eat their beloved ferret. We arrived at the kennel, all safe and sound, and after I dropped them off I went straight home for a stiff drink and to lament the state of my ridiculous life.

So, there you have it, people. I support re-usable bags because they have purposes you could never imagine unless truly pressed, like containing small ferrets who are attempting to ruin your life. I could have never predicted that use for a bag, either, and I never would have had a plastic bag just sitting in my car waiting for that innovation.

So, people, you can let the RMWB know how you feel about the single use bag ban. They are conducting a survey of local businesses and retailers by mail, and a random phone survey of residents. You can also go to Recycle More where they will post an on-line survey. I know how I will respond (although I'm not sure they need to hear the ferret story) - how will you reply, Fort Mac? Regardless of your opinion stand up and be heard - I will be!
at July 25, 2011