Down With Webster : The Good, The Bad, and the Hearing Loss 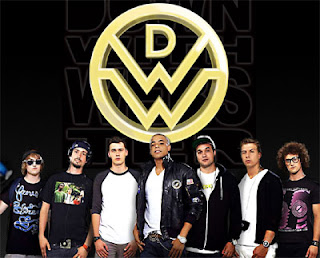 This summer is a bit different around my house as we have a houseguest in the form of my 13-year old niece. She is spending the rest of the summer with us, and combined with my own 12-year old this means I am often trying to find things for them to do (which means "things I am willing to drive them to and possibly accompany them to"). When my niece arrived I asked her if she was at all interested in attending a local concert - some band named "Down With Webster" was playing. It wasn't a band I am familiar with, and my 12-year old didn't really know them, either - but the squealing emanating from my niece seemed to indicate that a) she did, and b) I would be the coolest aunt ever to buy them tickets. Being ever in search of coolness I went out, bought three tickets (for them and me), and then I sat down to find their videos on YouTube.

I completely admit that when I first found their videos my reaction was "Uh oh". I have pretty diverse musical tastes but there's no doubt I'm a bit older than DWW's target audience (by, oh, decades, really). I listened and feared that I may have just found a musical genre for which I was, in fact, too old. I'd made the commitment, though, so off to MacDonald Island we went last night, arriving at 5:30 for an early spot in the rush seating line-up.

And I am glad we did go so early, as even though the doors only opened at 7:00 the line-up was already quite large by the time we arrived. I looked around and immediately noticed that the average age in the line up seemed to be about 14, and the gender ratio was decidedly weighted in favour of girls. That was the point when I realized my hearing was likely to go due to high-pitched squealing, but again, I'm a trooper, people. I've been to dozens of concerts and gigs, and two days of deafness is nothing new to me, either.

So, we stood in line for an hour and a half, and when the doors opened in we went. My kids immediately disappeared into the crush of kids up front, and I found a seat three rows from the front. I set up shop (meaning my iphone and ipad - I'm a writer, and those are the tools of my trade) and settled in.

Looking around I was a bit amazed at the diversity of ages in the crowd. I saw parents my age (and older), and some very young children. I have to be honest, here - I was a bit surprised to see such very young kids. Maybe that sounds "old" but I'm not sure I'd take children under  8 to such a concert as a) it was very loud, b) there was some questionable language/lyrics/behaviour on stage, and c) I'm not even sure what they'd get out of it. That's clearly just my opinion, but I know after the show on the ride home I had a discussion with my kids about the Jack Daniels that was consumed on stage, the young woman who tossed her bra onstage, and some of the more "iffy" lyrics. I expect to have those discussions with kids who are 12 and 13, but wouldn't really want to be having them with 8 year olds. Clearly that's a personal parenting decision, and I suspect some parents just didn't realize that DWW aren't really a "kid" band but more aimed at those in their teens and early twenties.

When DJ Diggy took the stage as the opening act I was, I admit, initially unimpressed. And if you're objecting to me calling him a "DJ" and think I should be calling him a "mash up artist" or some such thing then I will tell you that I am definitely too old for that distinction. He's a DJ in my eyes, and while I was unimpressed at first as the songs went on I realized he's a damn good one, too. I sat and really listened to what he was doing and realized that it's pretty amazing stuff, really, and by the time he left the stage I was a fan. He did a pretty good job getting the kids revved up for DWW, too.

There was a bit of wait between Diggy and when DWW took the stage, which I understood when I saw that Diggy is also in the band (meaning he'd just done the opening act and then had to play the rest of the show, too). Diggy needed a break between the two acts, and that made the rather long period between the two acts more acceptable. During this time I amused myself a bit on Twitter with some other Fort Mac folks who were up in the VIP section (they know who they are!) and reporting on the concert on Twitter. Then my iPhone died, and I used my iPad for a bit (thanks to FMPL and their freenet!).

So, finally, DWW took the stage, and I braced myself a bit. I thought it might be a long night, seeing as how I'd been abandoned by the kids and left on my own. I decided it was time to really listen and give it a chance, though, and by the second song I was tapping my foot. By the third song I was on my feet and starting to dance. By the end of the night I was really dancing. By the encore I was a DWW fan.

Down With Webster put on an amazing show. There is an energy and intensity to those boys, and a true talent, too. I'm not a fan of rap, really, and I can't say I absolutely loved every song - but I enjoyed every single minute of the show. When the encore was over I looked around at all the kids who'd been dancing and bouncing the whole time and saw nothing but happy sweaty faces.  When my kids finally emerged from the crowd they were hot, sweaty, tired, and blissfully happy. My 13-year old niece had caught a drumstick tossed from the stage, and she clutched it like a small wooden trophy. My 12-year old, who is on the tiny side, found a group of girls who were concerned she would be crushed by the crowd so they pushed her right up in front of the stage, and thus she had a prime view of the whole show (little do they know that she would quite likely have maneuvered her way up there all on her own, being quite determined). Both of them were now confirmed, life-long DWW fans. Both of them had "favourites" in the band and the ride home was pretty much consumed with discussions of who was cutest (the words "nom nom nom" came up a lot, meaning one of the boys they thought particularly yummy looking). We stopped for some fast food burgers and sat in the car eating, laughing, singing lyrics, and generally revelling in what a good time we'd all had.

Yep, people, I said we'd ALL had. I had a GREAT time. This morning I woke up, showered, and then bought three DWW songs off iTunes and listened to them in my car. I'm a fan now, too. Their sheer enthusiasm for what they do won me over completely, and I now have respect and admiration for Down With Webster. I am so grateful yet again to both MacDonald Island Park and Events Wood Buffalo for providing this community with such great entertainment - and with the opportunity for someone like me to lose their hearing for a couple of days but find that maybe, just maybe, she isn't too old for anything.


Down With Webster - "Whoa"