So, people, what are you doing August 4-7? If you want to find me I will be at my all-time favourite Fort Mac summer event - interPLAY! Don't even bother trying to find me at home that weekend - because I won't be there. I'll be on King Street, and if you have any sense you will be, too.

When we first moved to the city almost a decade ago the very first event we attended as a family was interPLAY. We had been to Fringe Festivals in a couple of places and knew that interPLAY sounded very similar, so we took our two-year old and checked it out. Frankly we fell in love with it that very first time, and we have attended every year since. I've even been known to adjust holiday dates so that we would be in the city for interPLAY because it's just that big a deal for us.

Why do we love it so much? Because it appeals to every member of my little family. My kid, even at almost 12, still loves the face-painting, but is also totally entranced by the street performers. I'm thrilled that the Aerial Angels are back this year as my kid has idolized them since they first visited interPLAY years ago (and a couple of years ago my kid even attended the Starfish Circus Camp that the Angels are associated with). Then there's the mini-golf tent, the food, and just all the other "stuff" to see and do. I think my kid gets that this is a magical event that turns a boring city street into a full-on festival, and kids see the true beauty in that.

I think my husband loves it because it has that urban feel that he sometimes misses in Fort Mac. At times this can feel more like a small town than a city and interPLAY attracts the kind of crowd (artists, performers, musicians) that you find in larger cities. This means it has that big-city vibe, which appeals to him (and to me, too).

And me? I just love everything about interPLAY, from the plays to the street performers to the music to the food to, well, everything! Last year I went to see "Spirit of the West" at interPLAY and thanks to the kindness of Claude Giroux of Events Wood Buffalo (who didn't kick my best friend and I out of the backstage area after the gig) got to meet John Mann of SOTW, which I've long wanted to do. Local events photographer Dan Lines even snapped a photo of me with with John and it's become a treasured memento of a great night. It was an experience I'll never forget - and it was all thanks to interPLAY.

This year's interPLAY looks amazing. I've been reading over the interPLAY program since it was released and have just been getting more and more excited. I'm so excited that this year I will be able to the attend the very first interPLAY Film Festival, hosted by Events Wood Buffalo and YMMPodcast (my very favourite local podcasters!). The musical acts sound intriguing, and while I'm not a fan of metal I might even check out the band Fozzy on Saturday night. I'm also delighted to see some local acts getting some stage time at interPLAY, too, like Johnny Guitar (Thursday), Shantelle Davidson (Friday), Givenstone (Saturday), and Until Dawn (also Saturday). And of course, besides the music and the films and the street performers there is the main reason for the festival - the plays, of course! They all sound incredible this year, and once again I cannot wait to see what sort of talent this event draws to our city.


I'm thrilled at the new interPLAY location on King Street by Keyano College because it's a lovely setting, away from downtown traffic and noise (and snarling drivers annoyed by the closure of Franklin Avenue).  I've already warned my family that they won't see me much that weekend - but they will know where to find me. I'll be sitting somewhere in front of a stage, with my cell phone turned off, and mesmerized by performances I'll likely never forget.

interPLAY is also an event that is highly dependent on volunteers. If you'd really like an inside glimpse into the workings of this kind of street festival I recommend heading to Events Wood Buffalo Volunteers and seeing what kind of position you might be interested in signing up for. Attending the event as a guest is great - but being an insider is just that much better, and gives you a much better understanding of what it takes to pull off a festival like this (as well as allowing you to meet some pretty great people in our community).

Look, people, if you've never been to interPLAY (and unless you are new to the city you have no excuse on this one) you NEED to go and check it out. I promise you that there is something there for everyone, even if it's just some food from one of the vendors or a hat from one of the little shops in the Marketplace. There is so much more to the weekend that I can possibly cover here, so please check out the online program and find the part that interests you - and then get out there and do it. interPLAY happens once a year, Fort Mac - and I think it's one of the very best things about this city. Come on out and I'm pretty sure you'll leave thinking the very same thing. See ya there, people! 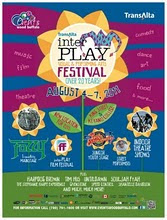