Some Things Aren't Meant To Be Shared... 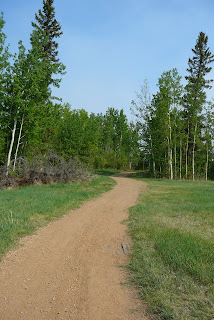 One of the best things about Fort Mac has to be the trail system that runs through the entire urban service area. From the well-recognized Birchwood Trails to the lesser-known trails behind new neighbourhoods the RMWB has done an incredible job of providing groomed trails for outdoor enthusiasts. These trails are amazing places to walk, run, bike, and cross-country ski. You know what they aren't meant for, though? ATV's, snowmobiles, and dirt bikes.

In my previous home in this city I lived right on the edge of the trail system in a newer neighbourhood. It was a glorious place to be year-round, beautifully green in the summer and wonderfully crisply white in the winter. The RMWB had invested a great deal of time and effort in developing the trails, and they were in place before many of the homes in the area were even finished. What frustrated me the most, though, was that the trails quickly became a favourite spot for motorized off-highway vehicles, and it was a situation with many problems.

The first issue is that off-highway vehicles chew up the groomed trails. The RMWB puts in gravel and mulch to form the trailbed, and the motorized vehicles quickly create mud paths instead. Suddenly instead of being a great place to run or walk the trails became an obstacle course of potholes and deep puddles from tire ruts. This meant it required the RMWB to invest more in trail maintenance, of course, and thus cost every resident of the city just a bit more for these trails.

The second issue is noise. Many of the trails are fairly close to residential areas and thus within both eye and ear shot of local home owners. I can't tell you the anger I felt one night at 2 am when a snowmobile was attempting a short cut and got stuck in a small tree just off the trail by my house. The revving woke the entire neighbourhood, I'm sure, and I don't think anyone minded when I got out our ridiculously bright flashlight and trained the beam right on the snowmobile rider. I doubt he enjoyed the attention but he'd already created quite the spectacle. I was just providing the lighting for the show.

The last, and most important, issue is safety. While walking on the trails with my child and dog I had many close encounters with off-highway vehicles. The trails are simply not designed to be shared by pedestrians, bicyclists, and vehicles with large and powerful engines. It is a tragedy in the making, and only a matter of time before someone is injured or even killed. I don't think those driving the off-highway vehicles have the intent of hurting anyone, but to use them on trails where there are pedestrians just shows poor judgement in my opinion.

I'm not against the use of off-highway vehicles for recreation. I am opposed to using them within city limits, and most definitely on trails populated with children and dogs. All it takes is one unfortunate incident and everyone is looking at a lawsuit, including the RMWB (something I pointed out to them several years ago when I wrote to them about my concerns regarding this situation). The true point is that I don't think anyone wants to see a tragedy - not the trail users, not the RMWB, and not those who use off-highway vehicles. The best way to avoid that is to use only those trail access points provided by the RMWB, and to use off-highway vehicles outside the urban service area.

After one close encounter on the trails between a dirt bike and my child I told the rider that he didn't want to be the one who injured my child because not only would he experience guilt and shame I'd make sure he faced legal and financial consequences, too. I don't know if that "momma bear" attitude had any impact on him, but I hope it did. I didn't want to be nasty about it but I'm not sure he had actually considered the potential ramifications of using his off-highway vehicle on what is essentially a pedestrian trail. As the city grows every citizen needs to consider our impact on those around us, and to consider the consequences before we act. I hope every person who reads this and thinks about taking their off-highway vehicle onto the trails within the urban service area thinks about this post before they start their engine - and then loads their snowmobile, ATV, or dirtbike into their truck to head out of the city or to an official trail access point to enjoy the great outdoors the right way.
at July 07, 2011