How Suncor Saved An Ankylosaur

In early March 2011 Suncor shovel operator Shawn Funk was probably having a pretty typical day at work. There he was, digging his shovel high into a wall in the Suncor mine, when he saw something unusual. He saw something like this: 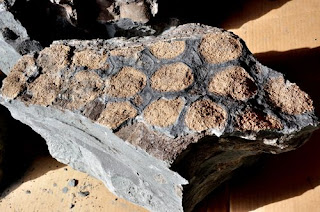 Now, I don't know much about the geology of the oilsands, but even I can say that this is a rock that looks pretty unusual. Shawn Funk thought so, too, and he had the good sense to call in his supervisor. His supervisor took one look and knew it was time to call in a geologist - because this had the potential to be big.Very big. Like dinosaur big.
The geologist came in, took a look, and knew it was definitely time to contact the paleontologists at The Royal Tyrrell Museum in Drumheller. Why? Because the geologist knew that this was, quite likely, a dinosaur. When any such find is made at any of the oilsands sites, whether the find be archeological or paleontological in nature, the law (Alberta Historical Resource Act) requires the company to cease operations in that area and contact the relevant authorities. The thing is of course that Suncor didn't just contact the Tyrrell because they had to, but because they wanted to. They knew that any dinosaur find is exciting, but little did they know how truly exciting this find would prove to be.
The dinosaur found appears to be an ankylosaur, a dinosaur that roamed our continent 110 million years ago. At that time this area was a marine environment, an ocean, and the dinosaurs that have been found here to this point have all been marine animals. But not this one. This ankylosaur was a land creature, and it should not have been in this marine environment at all. This is the first time a land vertebrate has been found at the oilsands sites (there have been marine fossils found, mosasaurs and plesiosaurs and the like). That makes this one astonishing find, people, and it just gets better. There are few fossils from this era in existence, particularly in Alberta. This fossil may be one of the most complete and well-preserved ankylosaurs ever found, and when the paleontologists from the Tyrrell arrived their excitement was uncontainable. This was a very, very major find.

The final amazing thing is that this fossil was found and recovered at all. Were it not for the oilsands operations this fossil would never have been uncovered, and would have remained in the earth for all eternity. Instead it has been found and will add immeasurably to our understanding of ankylosaurs, and of our general understanding of creatures from that time so incredibly long ago. There is yet another reason this find is so incredible, though - were it not for where it was found it would never have been excavated. The fossil sat high in the wall, beyond easy reach, and often when fossils like this are found in other places they are left there because it is simply too difficult to extract them. The resources required to excavate them (large machines and skilled operators) are too far away and too costly - but in this case good fortune prevailed. Suncor, of course, has all the large machines and the most skilled people to operate them, and what could have been a major find that would never be seen by the world instead became one that could be, and was, recovered.
Personally I find this story very exciting. I have no formal training in geology or paleontology but I've been a fan of dinosaurs and the like since I was a young child. I am always thrilled to see fossils, and excited by new finds, especially here in dinosaur-fossil rich Alberta. What I find loveliest about this story, though, is that it seems I am not alone in this excitement. I spoke to someone from Suncor who was involved in the excavation of this ankylosaur, and they indicated that the excitement at the site of the discovery was infectious. People who had been at Suncor for decades showed up to see the fossil and to see the recovery process. Employees who had been involved in the find and recovery had a sense akin to "pride of ownership" at being involved in the process of bringing this amazing fossil out of the rock. There was a palpable sense that this was a once-in-a-lifetime, once-in-an-oilsands-career, event, and that sense gave everyone involved such pleasure and pride.
The ankylosaur now resides at the Tyrrell museum where preparators will slowly tease the rock from the fossil itself. This is a painstaking and agonizing process that will likely take years (I've watched them use dental picks to pry tiny bits of rock off a fossil and can't even imagine how incredibly laborious that is when we are discussing something the size of an ankylosaur). Instead of being encased forever in rock this precious ankylosaur will some day be shown to the public, and the story of it's discovery and recovery can be told to the world. I had absolutely nothing to do with it's discovery or recovery, people, and yet I am so proud of Suncor and their employees. Suncor saved this little ankylosaur from being lost in rock forever, unknown, undiscovered, and unappreciated. I can imagine some day when it goes on display and it is surrounded by small children who gaze in wonder and excitement at it's size and strangeness. That image alone makes me smile, people, and I bet it makes you smile, too. This is one momentous discovery we can all be proud of, Fort Mac. This little ankylosaur belongs to all of us - and we have Suncor and their employees to thank for bringing him home to us.