I returned home from my Teacher's Convention vacation rested, relaxed, and ready to dive back into all the fun that is Fort McMurray. Unfortunately I also came home sick, bringing with me a lovely cold caught in the mountains (and like all mountain creatures this appears to be one tenacious little critter). This explains the delay in this blog post review of the final day I spent at winterPLAY. It certainly isn't that I didn't want to review what I think was the beginning of an amazing new adventure in Fort Mac entertainment. Nope, I just didn't want to keep sneezing on my computer screen!

So, today, loaded up with cold medication (and thus giving myself an easy excuse for any bad language, grammar, or spelling - hey, I'm high on cold drugs, people!), I sit down to write about the last Saturday at winterPLAY - and about what I think the new evolution of this festival means to us.

On Saturday I headed down to the Snye at about 1 pm, coffee in hand, and discovered parking was difficult. Real difficult. In fact I had to park quite a distance away, at what appeared to be a snowmobile launch point, but I was okay with that as it meant lots of people were enjoying the winterPLAY festivities. I got out of my car and was mildly disturbed that I was now parked on a frozen river, and walking on it, too (I'm a bit nervous about things like that, always expecting that if the ice should crack it would naturally do so under me).

I wandered over to the tents, and the first thing I saw was the snow block maze, which was pretty cool and appeared to be crawling with children (I'd cleverly left mine at home, lounging in their pyjamas and watching YouTube after their exhausting mountain holiday of...watching YouTube). And I spotted the ice slide, and then the ice carvings. Oh, those ice carvings! 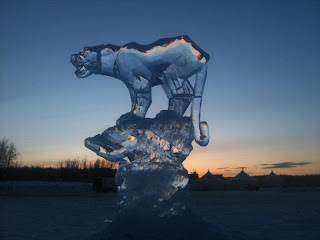 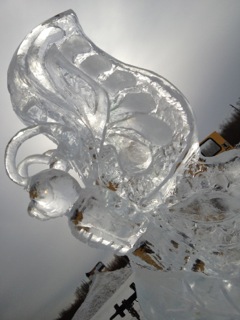 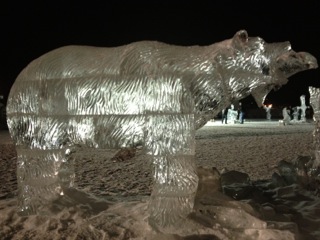 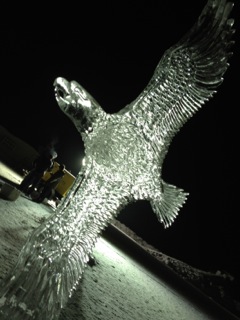 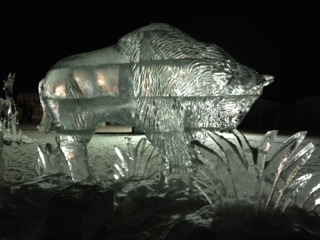