Fort McMurray is far removed from the Italian region of Tuscany, especially in March. In fact I can’t quite imagine two places much further apart in terms of climate and atmosphere – and yet on Saturday night the Northern Lights Health Foundation, with the assistance of the staff of MacDonald Island Park, and several volunteers, brought a little Tuscany to Fort Mac – and it was glorious.
The event was the 25th annual Spring Fling, a fundraiser for the Northern Lights Health Foundation in support of all the work they do in ensuring quality health and wellness services for our region. I had the honour of attending the NLHF Festival of Trees late last year, and I was anxious to check out this event that both welcomes spring and is the first gala of the year. I arrived at MacDonald Island to see that the local glitterati were out in force, in fancy gowns and suits and jewels. These galas are a grand excuse to dress up, of course, but the real reason behind them is the fundraising – and as the evening wore on I learned first hand the importance of that. 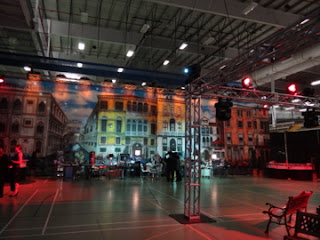 First things first, though, as I had just arrived in Italy and the evening had just begun. I entered the first field house expecting some Italian grandeur, and was stopped dead by the jaw-dropping background of a Tuscan street scene. The backdrop stretched the full width of the field house, lending a distinct Italian ambience to the setting. Right in front when I entered I found a fountain, just as you would find in an Italian piazza, and a classical music quartet. The scene was elegant and once again somehow transformed a field house used for soccer and other sports into a gorgeous piece of Tuscany. 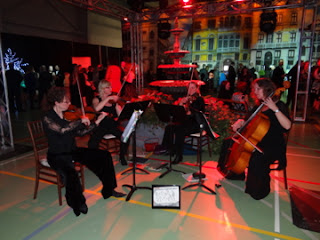 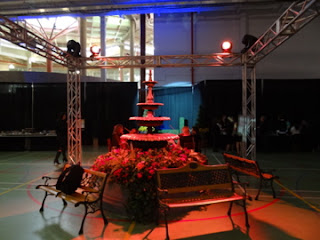 There was time to mingle and chat with guests, take photos and peruse the silent auction items. Then there was the selection of hor d’oeuvres, which I avoided knowing that a grand Italian meal lay ahead. All reports from those who indulged were positive, though, and wine glasses in hand the guests enjoyed the string quartet while waiting to be called in for the meal.
Then we were invited in to dine – invited in small groups, avoiding the “cattle call effect” of some events and therefore lending a further aura of elegance to the affair. And I walked into the second field house and was again stopped, this time by another amazing backdrop. 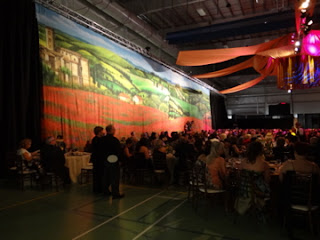 This time the setting was a Tuscan countryside, and it appeared we were going to be dining al fresco, in the open air and enjoying an evening in Italy in fine style.  Beautiful table settings and décor completed the atmosphere, and when I found my table I was delighted to find the sort of companions one hopes for when you attend such events solo (meaning those who are willing to include you in their conversations, and make you feel like part of an extended Italian family). 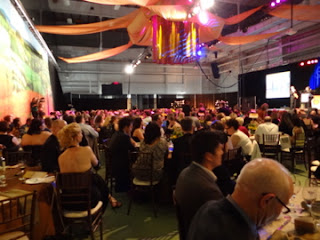 The formal part of the evening began with welcome messages from our MCs for the evening, Tyran Ault and Kyla Getty (Tyran looking uber-handsome in his suit, Kyla stunning in her purple gown). Tyran and Kyla were really quite ideal for this adventure in Italy, both bringing their own unique flair and talents to the master of ceremonies role. 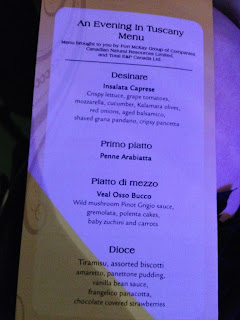 There were the usual speeches, one from the RMWB delivered by Don Scott, and a greeting from the NLHF – and then it was on to the family style dinner, which I was anticipating with relish. I’d snuck a peek at the menu and it looked amazing, so I couldn’t wait. The salad was served individually, and was delightful, but it was the Penne Arrabiatta and Veal Osso Bucco I was really looking forward to – and once again the Mac Island kitchen worked their magic and created a wonderful Italian feast. The food was served family style, meaning in communal bowls that we passed around just as a family would (and as my large German family did every Sunday at dinner, and so I was taken back to those meals years ago, too). The food was terrific, the company was good, and the setting was perfection. 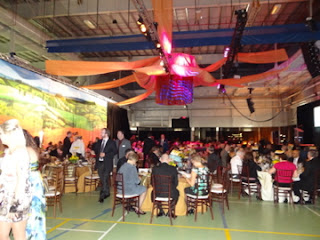 Just prior to dessert being served the NLHF showed a short video. Now, these are the ones that usually get me all teary-eyed, and this one was no different. It was the story of two local residents with very different medical issues, but who both had accessed local health services in their time of medical crisis. Their stories were painful to watch, as I always find it hurtful to see others speak of their suffering, but the stories were also hopeful. The man spoke of his long struggle with an oesophageal disease, and the young girl and her mother spoke of the knee injury that caused her to endure horrible agony. They all spoke glowingly, however, of the level of care they received at our local hospital, and about how that level of care was only possible because of fundraisers like the one we were attending that night. When I looked around my table I realized that the couple seated across from me were the parents of the young woman in the video, and I was touched, because my youngest Intrepid Junior Blogger is about the same age as their daughter. And like their daughter mine was injured once, too, breaking her arm in a freak accident (falling while walking in the hallway, of all things), and she was treated with kindness and professionalism by the hospital staff. I had the chance to speak to the couple a little later that night, and they shared their story while I shared mine. We spoke about how this little community of ours has a huge need for improved health care services, and we spoke about our children, as parents do. I think we connected on that level alone, but also in our desire to see things in this city continue to improve, including our health care services. It’s not that there is a problem with the services or the providers, as they are stellar, but rather an issue with shortage of those services and providers, a situation only money will fix. 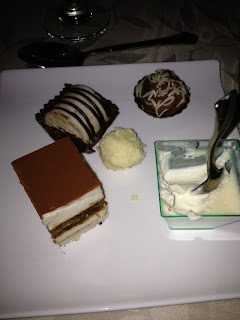 After the video it was time for dessert and the live auction, with my favourite auctioneer Ross Jacobs burning up the stage yet again to auction off 4 items, ranging from a “socialite events package” to a trip to a private villa in Costa Rica (raising over $34,000 according to my calculations). While Ross did his usual cajoling, teasing, and occasional downright harassing (and losing his place and forgetting what the last bid was, always an amusing moment), I ate dessert. And as much as I enjoyed the main course I think it’s the desserts where Mac Island really shines. The Frangelico pannacotta was heaven, and the tiramisu just as it should be, sweet and light. The panettone pudding was a delight, although I must admit I missed the sticky toffee pudding they often serve at events (I’ve become totally addicted to that pudding, and while I realize it’s not Italian it’s just so good that I plan extra gym time around that pudding alone, which means Mac Island has me coming and going as it’s where I both eat that pudding AND go to the gym).
After the desserts and the auction it was time for the winners of the door prizes and other raffles to be announced, and then time for a little outdoorsy-feeling dance party. The mood was festive and light, and it felt like spring was in the air. Not only spring was in the air, though. I think hope was in the air, too. These fundraisers are elegant, festive events, but somehow they manage to maintain their focus on the purpose and reason for their being – in this case, the Northern Lights Health Foundation, which at some point will touch every resident. 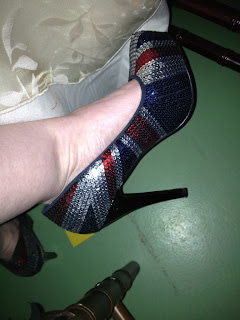 You see, if you live in this city for any length of time you will no doubt access health services. It’s something you take for granted until you need them, and then when you need them nothing is taken for granted any more. In that moment of crisis and need our health care providers are there, and thanks to the NLHF they have the ability to do more than ever before. This is the reason we gather and raise wine glasses and auction paddles. This is the reason we write down bids for silent auction items, and the reason we buy small Italian flags on the remote chance that we will be the one to win the diamond. These galas aren’t about fancy dresses or chic suits or Union Jack shoes (ok, those were my shoes, I admit it!). These galas are about people like a man who is fighting a disease that has caused suffering, and a young woman and her parents who faced the kind of nightmare that every parent fears. These galas are about organizations like the Northern Lights Health Foundation, and the doctors, nurses, and support staff they assist in doing their jobs better by providing them with more equipment and better technology. These galas are about bettering our community, and that’s why I am always so pleased to attend them. It might feel like an evening in Tuscany but it’s really another evening in this special little community of ours – and I wouldn’t wish to be anywhere else, even Tuscany.
My sincere and profound thank you to
The Northern Lights Health Foundation
for the kind invitation to attend
An Evening in Tuscany,
Spring Fling 2012 – and special thanks to
the parents who shared their story with me J


Check back tomorrow for a post about
transforming a field house
into a little bit of Tuscany!
at March 26, 2012