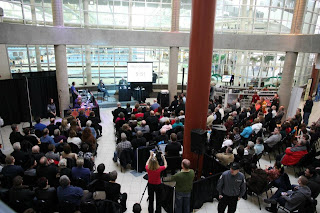 Photo credit to MacDonald Island Park
As I wrote last week I was pretty excited that Rex Murphy was coming to Fort McMurray to talk about the oil sands - and our community. I'm a fan of Cross Country Checkup - I love any medium that allows "regular" people to express their opinions (quite likely why I'm a blogger). So, Rex coming here was pretty exciting stuff for me, and I knew it would be well attended as there are many people here who have things they'd like to say to the world - and this was an opportunity to do just that.

The youngest Intrepid Junior Blogger and I arrived early at Mac Island, as I wanted to ensure a good seat and view for her. We claimed seats right at the front, just behind the row reserved for local "movers n'shakers", as I explained to her, and settled in. We were approached by a lady with a clipboard who asked me why I was attending the show, and as soon as I explained about my blog her eyes lit up. You see, she was a producer, and they were looking for people interested in speaking on the show. That's the point I started to feel a bit sick as I knew I'd managed to likely do it again and gotten myself into speaking publicly when that's an activity that makes me nauseous. After the nice lady walked away I looked at my daughter and said quietly "I really need to learn to shut up". I'm sure there are people out there who think I'm some sort of attention hound who loves this stuff - but it's the exact opposite. I love to write, hidden behind a keyboard, but speaking to crowds or on the radio? Shudder.

Anyhow, as the crowd began to fill the seats I rather hoped the producer might forget about me. I saw so many in the standing room only crowd that I know, local people who live here and work here and call this community home. They had all come, like me, to see Rex speak to Mayor Melissa Blake. They all wanted to share our view on our community, and our industry. And they wanted to share it all with the rest of our country.

When Rex took the stage the atrium was filled to capacity. The atrium above was filled, too, people looking down over the crowd below. And when the show began and Rex began to speak about our city I knew it was going to be incredible. I knew this was a real opportunity to share thoughts from "inside the lion's den", for each person who spoke to act as a "citizen journalist" and tell their own story of life here.

Mayor Melissa spoke first, and she represented us beautifully, as she always does. She somehow manages to capture the essence of who we are as a community, tie in industry and the environment, and present it as a cohesive whole. I remain in awe of that ability, as few people have such a natural gift and ability to connect. 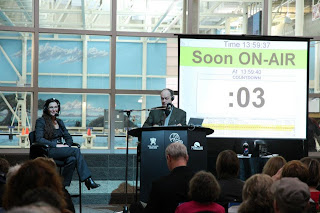 Photo credit to MacDonald Island Park
They spoke to the first audience member - and then the producer came to me with a microphone, and motioned for me to rise. What no one could see over the radio was that I was clinging to the Intrepid Junior Blogger's hand as if it were a lifeline. My terror was quite genuine - I fear saying the wrong thing, and I fear representing the community - and myself - poorly. I fear, frankly, looking like a complete fool.

When my turn came Rex introduced me and asked what I wanted to say - and it sort of all gushed out. How there are so many stories of life here, and how we need to tell them ourselves and not rely on others to do so. My frustration over the last decade with our portrayal in national, and international, media. My decision to start this blog when I realized that the only way to change the perceptions of us - the only way to get our message out - was to do it ourselves. And how I, a stay at home mom, realized that I had the power in my hands - in my laptop - to spread my story of life here. Rex asked why people should listen to me, someone who lives in a house paid for by the oil sands industry, an industry that clothes my child and feeds us. And I replied that I should be listened to because I live here, and have done so for years. I have a different perspective from an outside journalist, not the "right" viewpoint but simply a different one that deserves to be heard. But it's not just me, people. I think we all deserve to be heard, all those who call this place home - and yesterday we were.

Since yesterday I've heard some criticism of the program - that it was a Fort Mac "love fest", with no mention of our challenges and issues. And to some degree that's true, but I also think it's okay. I think everyone in that room acknowledges those problems - but I think the "checkup" we received was cathartic. I think it was the other end of the pendulum swing, a reaction to all that negative coverage from outside media. If it was a "love fest" I think it's because we collectively feel we could use a little lovin' - and if necessary we will give it to ourselves. I don't think we can or should ignore our issues - social, environmental, economic - but I don't think we need to talk about them all the time, either. I think sometimes we can just indulge in a two-hour love fest and talk about the good things here, and about how this place gets inside your heart even if you come here cautiously at first.

The most touching part to me was when the first phone call came in to the program - and it was from a woman in Red Lake, Ontario. When they announced the location of the caller the Junior Blogger and I looked at each other in astonishment. You see, twelve years ago she was born in the hospital in Red Lake. That town was our home prior to moving here, a place we lived in for five years. Red Lake is a small remote place, based on the industry of gold mining (an industry not without it's own environmental and social costs). The lady was clearly not pro-oilsands, but she was pro-future, and particularly pro-future for our children - and while our views might diverge on some topics I think we share that one quite firmly. Last night I sent her a message on Twitter, introducing myself and telling her of the coincidence. She and I may differ on some matters but in the end we are both women, both moms, both writers, both Canadians - and both humans on this planet, and yesterday due to a little radio show we connected across the miles and across our differences to find our common ground. And that's what shows like Cross Country Checkup do, people. They let us find our common ground despite our differences.

I think yesterday we sent a message out to the world. We talked about who we are, and about who we are not. We talked about our industry and our community and our link to the world. We found our common ground with each other, and, I hope, with the rest of the world. I listened to the podcast of the show today and I could hear the fear in my voice. It's there, even if no one else would recognize it. But I got through it, with the Junior Blogger at my side and as my inspiration as always. I truly believe we need to take every chance we get to tell our stories, even when our knees shake and we feel a bit like vomiting. I told mine yesterday, as did many other residents of our city, and I suspect mine weren't the only knees shaking. I am so very proud of every single person who spoke on the program, and of those who came to Mac Island to see it. I'm proud of all of us, Fort Mac. We are finally telling our stories ourselves - and I can guarantee you this : the world is listening. So, let's make every opportunity count, people.


My genuine and sincere thanks to
Rex Murphy
and his CBC crew for bringing
Cross Country Checkup to
Fort McMurray -
and thank you to
Mayor Melissa Blake
and all the others who
shared their story yesterday!
You can hear the podcast here! 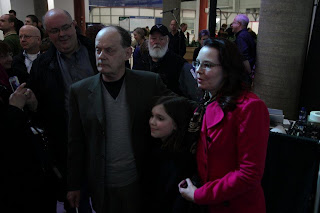