My Chat with Premier Redford - And Thoughts on Passion, Vision, and Drive

Well, people, there are things you see coming and things you just don't. What I had the chance to do yesterday was one of those things I never saw coming, never anticipated happening, and never even dreamed of as it seemed so ridiculously impossible to even imagine. You see, what happened is that I had a chance to sit down privately with Alison Redford, Premier of Alberta, and speak to her for this blog.

You might not think that's a big deal, but I do. I'm a wild card when it comes to media, people. I don't work for anyone, and no one can fire me. I have no journalism degree, and I answer to no one but myself (and you, of course). If I was a politician I'm not sure I'd agree to sit down with me for 10 minutes and let myself be interviewed, but Alison Redford did just that - and I was thrilled to have the opportunity, because in that brief time I learned a few things about a woman I already respected and admired. I learned what motivates her, and what makes her want to do her job. I learned that she is passionate about what she does, and why. And I learned she isn't all that much different from any of us.

When I received word that I had been granted an interview I was excited and terribly nervous, and most of it focused around what to ask her. I'm no political wonk, aware of the intricacies of every policy and platform. I was talking about it with someone who is a dear friend, and someone who became a friend when I interviewed them for this blog. I told her about how I didn't know what to ask, what to say in an interview of this magnitude, and she told me to just do what I always do - and to ask those questions I always ask. Those questions? They are about passion, and vision, and drive. And so yesterday afternoon when I sat down with Premier Redford I did exactly that, and asked her what makes her get up in the morning and do what she does every single day.

When we met for the interview I looked Alison in the eye and told her that I knew many media people would be asking policy questions - and that I wasn't one of them. I told her I was going to ask different questions, and she looked a bit wary at first, no doubt wondering if I planned to ask what sort of tree she would be if she were to be a tree. But once I said I wanted to talk about her passion, her vision, her drive, and what makes her get up in the morning, all hesitation disappeared. She began to talk about why she wants to lead this province, a province with great wealth and great challenges, great potential and great issues.

One of the things I've noted over the past year is that when people talk about their passion - whether it is cooking or their non-profit organization or whatever - they change. Their eyes light up. Their faces become animated, and their hands begin to fly in the air as they express why they are so passionate about what they do. And yesterday I witnessed this in our premier as she began to talk about why she is so passionate about leading this province - and it centres around her daughter.

You see, Alison moved back to Alberta when she learned she was pregnant. She had grown up in Alberta, and she knew she wanted her daughter to grow up here, too, that there was nowhere better in this country - this world - to raise a child. She knew Alberta was where she wanted to be - but she also knew that Alberta could be better. She knew that we were facing some decisions, and that we were on the edge of amazing potential (and when she said this I was amazed, as I have been saying that exact thing about this community for years, how we are on the cusp of something happening here, and about how we need the right leadership even more at this point).

We chatted about how the future of this province is so important, and not just for Alison's daughter but for my daughter, too, and for all the young people growing up in this province. I had the privilege to attend her Student Town Hall at Holy Trinity yesterday and it was marvelous to see her with students, expressing to them her hopes for their future and the future of this province. When I talked with her she spoke again of her commitment to education, and to ensuring the future of all those who call this province home. And it wasn't just what she said, people, it was how she said it that mattered to me.

When we spoke about Alberta and the future and our children she leaned forward, her eyes ablaze, her features animated. Her hands flew in the air as she spoke, as she talked about the importance of needing to be able to deal with the speed of the changes we are facing in this world, and about how we need action, not talk. She spoke about diversity and managing our resources for the future and investing in education in order to ensure a bright future for all residents - and for the province. And it wasn't just her words that impressed me, people. It was the passion with which she said them, it was the vision shining in her eyes and the clarity of her motivation. It didn't take me long to figure out why Premier Redford gets up in the morning and does what she does - it's because she loves her daughter, because she wants the best possible future for her daughter, and because she wants the same thing for all of our daughters and sons, too. There is no doubt in my mind that her motivation is genuine and sincere and authentic. Over the last year I've spoken to dozens of people with passion, vision, and drive, and it's something you just can't fake. Alison Redford is the real deal - she loves this province with a passion.

And that would be why when I heard that Danielle Smith, leader of the Wild Rose Party, questioned Alison's love for this province I actually laughed. I can only imagine Danielle has never asked Alison the question I did. To Danielle Smith I say a polite "bullshit", as there is no way anyone who speaks to Alison directly can doubt her passion for this province, and her vision for it. It is as real as her love for her daughter, and as real as the love I have for my daughter.

Now I know Danielle's claim is that Alison can't love Alberta because she wants to change it. I asked the Intrepid Junior Bloggers this question this morning: "Does wanting to change something mean you don't love it?" - and my clever girls replied "Nothing is perfect, everything can be made better!". And that goes for people and houses and cars and provinces. Wanting positive change doesn't mean you don't love something - sometimes it means you love it so much you want it to be the best it can possibly be. And that, people, is what I see in Premier Redford. She wants to see this province improve and be the best place it can be, not just for you and me and her but for her daughter and my daughter and your children, too. Any doubts I had washed away in that ten minute interview. Any thoughts I had that her motivation may be anything else disappeared. In those ten minutes I saw a woman express her passion and vision and drive, and it all centres around us being the best possible province we can be.

I walked away from the interview feeling as I always do after speaking to anyone who shows such passion. I walk away inspired and hopeful and a little overwhelmed, because passion is such a powerful quality. It can change you, and it can infect you. It can make you see the vision, too, and make you want to share that passion. And Alison Redford, Premier of Alberta, is one of those people. I walked away infected by her passionate love for this province of ours, by her vision of a province even better than it is now, and by her drive to ensure we get there. In the end I sat in my car quietly for a few moments as I collected my thoughts. I thought about why we do the things we do, and about how I write this little unpaid blog simply because I want this community to be the best place it can possibly be for my daughter, and how I want everyone in the world to see how proud I am to be part of it. And I thought about how similar Alison and I are, her in her passion and vision and drive for our province, and me in mine for Fort McMurray. I drove away thinking about how we are so very different, and yet how we are, in the end, so very much the same in the way that matters. I drove away thinking about how love for our children makes us get up every day and do the things we do, even on days that seem never ending and wearying and when we question our sanity for continuing. And I thought about how on some days, like yesterday, we get a chance to sit and speak with someone for ten minutes and have them remind us of why we do what we do, some of us working as premiers and some of us writing little blogs.


My profound and sincere thank you to
Premier Alison Redford
for agreeing to speak with me, and
for sharing her passion, vision, and drive with me.
I believe she is a true role model for all young women
in Alberta, which is why I was delighted that
last night the Intrepid Junior Bloggers
had the chance to speak with her, too! 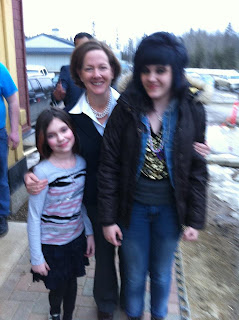