Bif, Burlesque, and A Guest Blogger (A McMurray Musings First!)

When I got the advance copy of the winterPLAY brochure I was a bit upset - I admit it. Not disappointed by the line-up of events, as they looked astonishingly good, but rather that I was going to miss some of them. You see, my husband, the Intrepid Junior Bloggers, and I had already booked a vacation during Teacher's Convention Week, and I was going to miss several winterPLAY events. Then I had an idea. A clever, wicked idea. What about a guest blogger?
I've never opened the blog up to anyone before, at least no one other than my friend Matt who did my recent re-design. I knew someone in the city, however, that was planning to attend some events - and who I trust implicitly, too. She is a lovely young woman, very interested in our community, and she brings something new to the blog as she is much younger than I (and far cooler than I could ever hope to be). So, when I asked if she could guest blog about some of her winterPLAY activities I was delighted when she agreed - and I think she will be guest blogging for me again, too. I have discovered that while I try to do everything and be everywhere I just can't do it, at least not without great difficulty and stress. So, for some things I think I will be relying on my intelligent, beautiful, and charming guest blogger. She goes by the handle @ashcakesquiggle on Twitter, which is where I met her - so, people, meet my guest blogger @ashcakesquiggle. I hope you enjoy her winterPLAY review as much as I did!
McMurray Musings
Bif Naked followed by Sweet Soul Burlesque, actually getting naked.
WinterPLAY in Fort McMurray is a magical time of year, spanning from Mid-February through until today, an event extravaganza right across our fair city, Events Wood Buffalo once again wowing the masses.
McMurray Musings writer Theresa asked me if I would like to cover a few events while she was out of town this week… and so here I am Guest blogging to let you know just how impressed I was.
Let’s go back to Thursday evening, Bif Naked at the Suncor Performing Arts Center in Timberlea.
First things first, what an amazing venue. A hop-skip-jump from my place, I saw the transformation from Hockey Shorts and Pucks Bunnies (brought to you by ymmpodcast and Events Wood Buffalo) which was an intimate, dark, round table function for forty and movie viewing into a bleacher stands with seats for 100, an acoustic set up-front and a rowdy crowd. 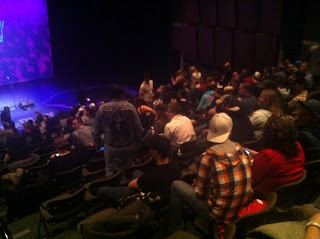 At this point I must admit, I had no idea who Bif Naked was until I heard about the concert and it was highly recommended by a good friend. I could not be happier that I went. 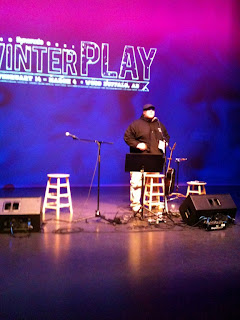 Being a Rock 97.9 concert, Nolan Haukeness introduced the performers with zest. 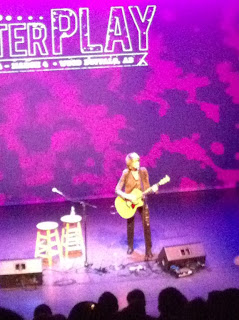 Photo Credit Steve Newman (@steve_reeve)
Opening Act Amy Heffernan, well-loved Fort McMurray local lapped up the crowds affection as people screamed how they love her as she came out on stage. Amy, being the comedic performer she is, played a beautiful love song called Perfect directly followed by “Arrogant Pig”. Amy was even encored by the crowd and having no encore material available she covered Johnny Cash- Folsom Prison Blues.
Bif Naked. Comes onto stage with a pink blanket. 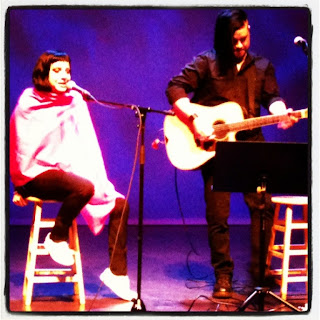 Photo Credit Steve Newman (@steve_reeve)
Between playing her set she made fun of her partner in tunes, asked for lotion from the crowd (which was delivered) and shared her many road stories, idle thoughts and how she got her first tattoo (The tattoo artist pointed at the all seeing eye on the wall).
A public view inside the private thoughts of a well-loved artist. An Acoustic set of epic-ness and a very sweet lady who has embraced life, a perfect tribute to the winterPLAY line up.
With the show all said and done, boyfriend and I marched down the stairs and stopped to speak to the very friend who recommended the show, until the crowd faded away and the few stragglers decided to see if we could meet Bif in person. And oh did we, in a small corridor a few adoring fans fawned over her as she took pictures, gave words of wisdom and signed tickets.
Beautiful and gracious as she was on stage, I have never met a star who was as welcoming and wonderful as Bif after show. I managed to get boyfriends ticket signed as well as a photo and a few words of encouragement in before stepping back into the cold and feeling like some kind of metaphoric growth had happened within.
Friday rolls around and to my luck I won two tickets to Team Canada DJs with an appearance from Sweet Soul Burlesque from Mix 103.7. Excitable doesn’t start to describe how I was Friday afternoon, I even managed to convince my Manager to come along to the show. With Boss on one arm and Sister on the other, we marched into the Performing Arts Center, dressed up to boot to discover a crowd of close to 20 people, enthralled by the beauties on stage. Yes, 20 people. I find Fort McMurrays turnout rate is hindered at such events. Many people I asked later didn’t realise there was a bar involved at the event, to which I scoffed, who has an R18 DJ dance party without alcohol?
Anyhow, we marvelled at the girls on stage (a few pictures included at the end of the post, which are SFW), flailed our limbs happily at the DJ set and even visited the Burlesque Merch table (having girls who perform burlesque give us a tutorial on tassels was priceless). The bartenders were a bunch of parents fundraising for their kids to go on a hockey trip, and I must say they didn’t have to twist our arms very hard for the good cause.
A few drinks, a limo ride with the DJs and Girls and a very sore head the next day I can happily say winterPLAYs evening events certainly not disappoint.
Countdown to InterPLAY starts now! Come onnnnn Summer J
Signing off, Yours Truly, @ashcakesquiggle 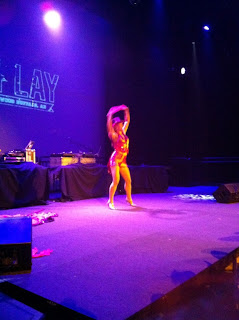 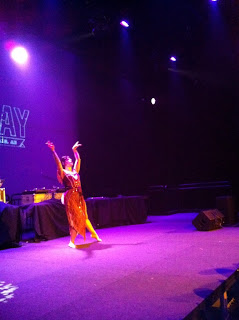 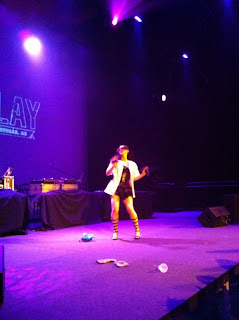