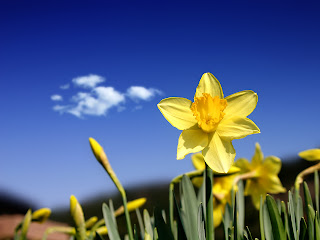 On my desk there is a small silver pin. It is a daffodil, a flower associated with spring and sunshine. It has huge meaning for me, as it was given to me by a new aquaintance who wore it on his lapel when we met, and who gave it to me when he learned that my father died of lung cancer six years ago. You see, the man who gave it to me works for the Canadian Cancer Society, and the daffodil is the flower that has also become associated with the fight against cancer.

Some of you may know that April is Daffodil Month, and that Daffodil Days are soon upon us. What you may not know, though, is what those little daffodils mean. Every year the Cancer Society sells daffodils to raise money for cancer research - but it's far more than that, too. Those little daffodils are reminders of every person who has fought cancer in this world. It is a reminder of those we have lost, and of their struggles. It is a reminder of what cancer costs us, not just in terms of money but in lives and pain and anguish. And those little flowers are a symbol of hope.

You see, my father died in spring. He died just after a massive snowstorm, and was buried during another snowstorm. It was a time when spring seemed far away, and when hope seemed impossible to find. He died before seeing the daffodils greet the sun that year, and he died of a disease that robbed him of his dignity, and his right to a peaceful death. He died from a disease that I despise, and he died in a way I will never forget. But there is hope, because I believe we can prevent others from dying the same way. Just as those tiny daffodils poke through the ground, and sometimes the snow, every year hoping to find sun, I think there is hope that we will cure cancer.

There are things that touch me more than others, and cancer is one of them. Losing my father in the way I did has forever impressed upon me the importance of making sure we try to prevent others from facing the pain and struggles he did. His long cancer journey was not only difficult for him but for my entire family as we faced what seemed to be an unstoppable foe, and when he eventually died we felt we had not only lost him but lost the battle, too. But all is not lost. The fight is not over. And hope did not die with my father, or with any of the others lost to cancer.

What touches me the most perhaps is that my father's favourite colour for flowers was yellow. Every year when my mother was alive I would send her a bouquet on the anniversary of my dad's death, just to let her know that I loved her and that I had not forgotten. And every year the bouquet was yellow, and so, of course, included daffodils. My mother is gone now too, but this year I will wear my little daffodil pin and remember my father. I will wear my daffodil pin and remember all those we have lost in the cancer wars, and I will remember that hope has not died. I will find my hope in the Canadian Cancer Society, an organization that wishes to see cancer disappear, and in a tiny little yellow flower that every year pokes out of the ground in the hope of seeing the sun.


The pins, which mark Daffodil Month, can be purchased at many retail locations including: 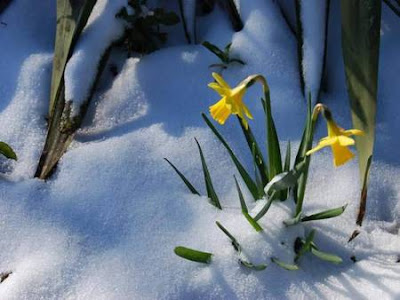