Just under a year ago I heard the news. It was disappointing, to be certain, and it took me some time to work out my feelings about it all, particularly since it had an impact on the Intrepid Junior Blogger, too. Someone we knew - and had supported - had been caught in a most unsavoury situation, and the impact was going to be felt in a lot of corners.

MLA Mike Allen's arrest during a government trip to Minnesota was a stunner. That his arrest involved two women that he thought were prostitutes but were instead police officers just added to the stunning nature of the news. It was a swift and rapid fall from grace, with Mike booted out of the government caucus in quick order.

There were those who demanded his resignation, and those who most likely would have preferred his head on a platter instead. But Mike quietly took a seat across the aisle from his colleagues. He went back to work, despite knowing that there were people who despised him. He continued to advocate for his constituents, people like me. And whatever one thinks of his actions one has to recognize that there is some courage in continuing to do those things, even while knowing what people must be saying about you as soon as your back is turned.

Today the PC caucus voted to allow Mike Allen back into their fold, and he will return to sit among them once again.

I do not and will never condone an illegal act, and what Mike did in Minnesota is illegal according to their laws. I do not and will not condone the victimization of women, and prostitution is far too often linked to this sort of abuse. But you see it isn't my role in this world to judge others, or to find them wanting. Whether this decision will have some impact on the PC party and their future goals to stay in power remains to be seen, and one could pick apart their decision. But that "one" won't be me. 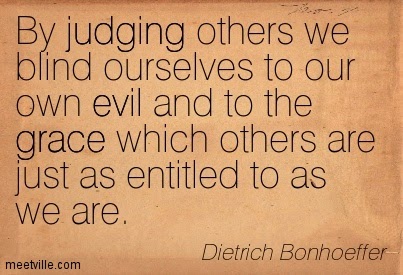 This was the quote that danced in my head today when learning that Mike Allen has found some degree of redemption within the party he fought so hard to help elect to government.

At some point in our lives I suspect most of us have been in need of redemption, and perhaps forgiveness. We have come to a point where we have been very low, and we have relied on others to acknowledge our flaws and faults and frailties...and to acknowledge that we too are human.

At some point we have hoped for grace.

We talk a great deal about forgiveness in our world. It is easy to adopt as a concept and much more difficult to practice in reality, as the concept is clean and pure while the reality is messy and fraught with emotion. We are far too prone to judging others, blinding ourselves to our own flaws, and ignoring the fact that the grace, compassion and forgiveness we would wish for ourselves we often struggle to find for others. We are such complicated creatures, really.

There will be those who judge me for this post, as others have done in the past. There are those who will think I am far too lenient, far too forgiving, far too quick to believe in redemption. So be it.

All I know is that I am not on this earth to either condemn or grant absolution to others. I am here to simply do my best and to support those who I believe are also trying to do their best, even if on occasion they falter and stumble.

And I do believe in redemption - and grace.

Today Mike Allen's colleagues saw fit to show him grace through voting to accept him back into their midst. I would suggest he is entitled to the very same grace others have shown to me in my life, and for which I have been so profoundly grateful.

There will be many eyes watching him now, including the IJB's. She has seen a rise, a fall and a show of grace. I think, in fact, she has seen a remarkable display of humanity, the highs, the lows, and the points in between. She has seen the messiness of forgiveness, and redemption. But she now too has seen grace, and I hope that it is a virtue she will embrace, both seeking it for herself when needed - and granting it to others as necessary. It has been a valuable lesson for many of us, including me.

We have been witness to many things in this episode in life in Fort McMurray - but perhaps the greatest thing we have witnessed is this: 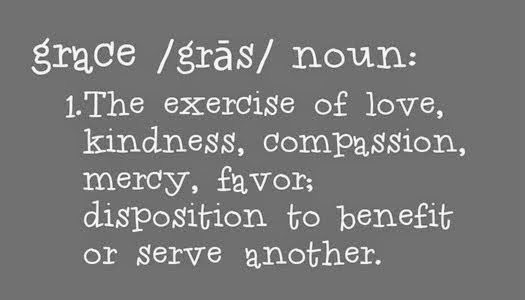