On occasion I find myself involved in episodes I often find puzzling in retrospect, as they seem to come out of nowhere and build steam until reaching some sort of crescendo. This happened with the "my Hiroshima" hashtag on Twitter earlier this year, a hashtag born in this very blog and adopted in a way I had not even anticipated. It happened again recently, albeit on a much smaller scale, when suddenly tractors - or the lack thereof - became a topic of conversation in Fort McMurray, a place where tractors are rarely seen and even less frequently discussed.

You see it all began when my friend Toddske of YMM Podcast shared that David Yurdiga, our new MP and then CPC candidate for the role, had "blocked" him on Twitter. I was bemused by this and even more bemused when I realized I had been similarly blocked, perhaps for asking some questions about the reasons for absence from two debates during the election. I was not upset, you see, but I was quizzical as blocking constituents, particularly when you are seeking election, seems puzzling strategy to me, but as I so often do I greeted the development with humour. I had made no secret of my support for one of the opposing candidates, but this turn of events went beyond politics for me and into human behaviour instead.

I had earlier seen a tweet from the Yurdiga campaign team of a picture of a tractor and a humorous comment suggesting that as the folks in the residence depicted had a tractor they must be supporters of the CPC in the federal by-election. Suddenly I had a thought. What better way to address this rather inexplicable behaviour than with some humour? Politics is often entirely too serious, so it was time to go off madly in another direction. So I tweeted this: 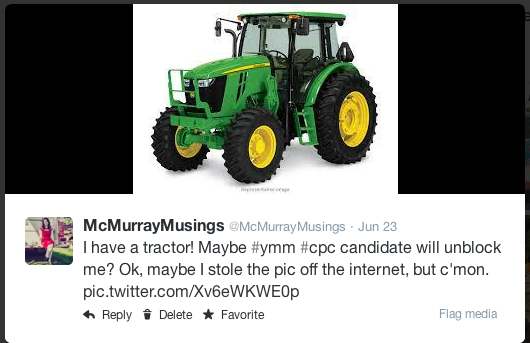 It was greeted with silence, although even I was disappointed with my effort. After all, it was just a picture stolen off the internet, not a real tractor. There was some banter back and forth with those blocked and not blocked by the candidate, but none of it was malicious - and while some of it was about politics a lot of it was all about tractors.

I knew I had to do better. I even found one of these, but it still wasn't right in my mind: 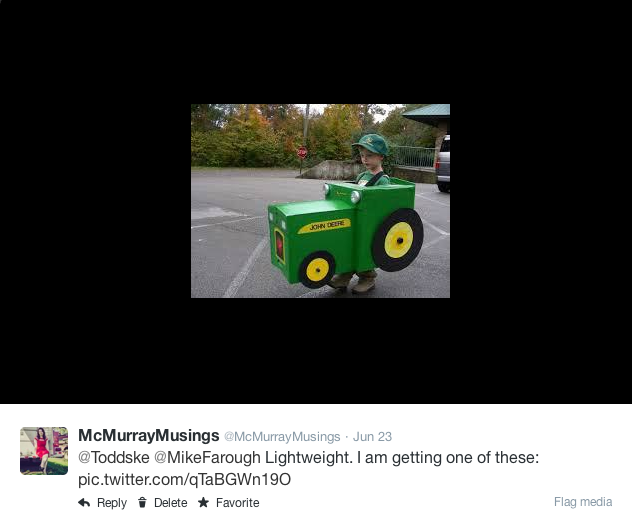 But sadly that still seemed wrong to me.

And then, one day, I spotted it.

I was driving the Intrepid Junior Blogger to school for her very final Grade Nine exam. The conversation went something like this:

IJB: Very good, mom, it's a trrrrrrractorrrrrr (she said, rolling out the r's at the same time she rolled her eyes, the universal sign that one is clearly dealing with an idiot of epic proportions).

Me: No, no, it's a tractor! A real tractor! Right in the middle of Fort McMurray!

IJB: (blinking and staring as obviously my idiocy was becoming legendary)

Me: After school you need to take a picture of me with the tractor!

IJB: Uh, no way, Mom. You are going to get us arrested. Or worse, embarrass me (fixing me with a baleful glare, to indicate this is not the first time she has been a reluctant sidekick in some sort of questionable scheme).

Me: But you have to. It's not just a tractor. It's a DEERE! And you know what Grampa always said.....

IJB: Yeah, nothing runs like a Deere (pause). What are you up to this time, anyhow?

And that is how that evening we ended up back at the tractor, a reluctant 14-year old in heels and her mother posed in front of a tractor for a photo. 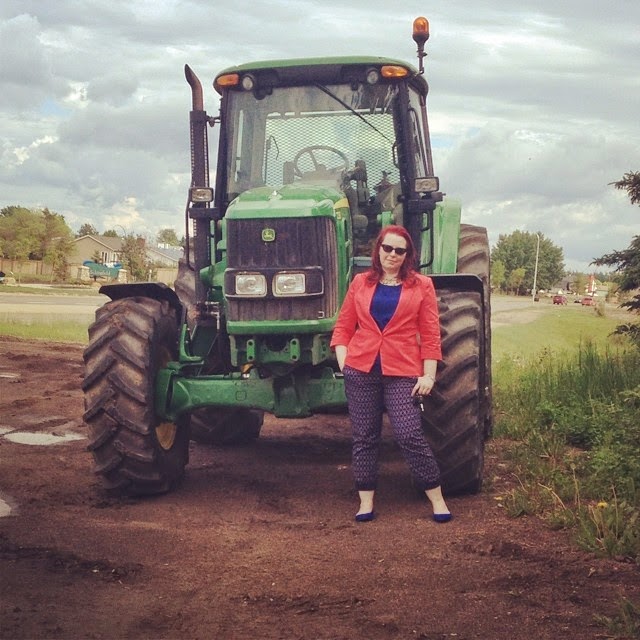 I tweeted it out, and the reaction was not entirely what I expected, at least not from some corners. I won't go into much detail on that although I will acknowledge I was accused of "bullying" with photos of tractors (you can read this for my thoughts on the overuse of the word "bully" and how it demeans a concept of tremendous importance). To be honest that was a painful bit of the story as the criticism came from a corner so unexpected and unanticipated that it caught me by surprise, as while I have a very thick skin after some years of dealing with anonymous hate mail there is still a person inside me who can be wounded on occasion. One of the other comments made, however, was that I was in some way mocking farmers or our rural brethren, demeaning their profession, and this accusation truly rankled as nothing could be further from the truth.

The reality, you see, is that while I posted the photo in good humour I truly was sharing a commonality that our new MP and I have - because I do in fact have a fondness for tractors that runs deep and wide, as deep and wide as my father's bond with his land.

I am the daughter of a farmer, you see. In fact my family history is closely entwined with the land and farming, and while I have never farmed myself and cannot claim that skill set or expertise (and it is one, both a science and an art) I have tremendous respect for it.

Growing up one of the many things my father emphasized was the value of land. Not the financial value, mind you, but the importance of owning land, something that did not rust or wither away or disappear over time. Land, he would say, is there forever, long before you arrived and long after you are gone and if you own land then you own something real.

I suppose that is why when he died almost a decade ago he left the bulk of his estate to my mother, but the family farm, which he had farmed during hardscrabble years in the 50's, to my sisters and I myself. Since his death we have co-managed it together, and I think each of us understand that this was both our father's attempt to ensure we stayed connected to each other and the most precious gift he could give us - land. I don't know how many people in Fort McMurray can claim ownership of a farm - but I do, and very proudly, too, because it isn't just any farm. It's my family legacy, just as traditional farms have always been.

Now, my father felt strongly about a few other things, too, like how if you owned a car it had to be a Ford (I am still amused that I drive a Ford even now, and recently when I began to think about buying a new car the thought of buying anything but a Ford filled me with anxiety) - and if you drove a tractor it had to be a Deere.

Maybe it was because they are green, one of his favourite shades, or maybe because his first name was John, too. Whatever the reason my dad was a "Deere man", and those other farmers who drove tractors of some other variety were ones he didn't entirely trust. He would say things like: "Well, he seems like a nice guy but he is a 'Case man' so..."and the implication would be left hanging in the air, unspoken but very clear.

And so I was so excited to find that Deere tractor mere blocks from my house, because it felt like synchronicity. Not the kind of synchronicity where you use a tractor to cause harm, but to continue a running joke and perhaps even suggest that the person from the "opposing team" (in this case Mr. Yurdiga) and you are not that different after all.

That some did not understand my intent or sense of humour became fairly clear, but that evening I checked it against my own standards of conduct. Would my little adventure with Tractorgate have disappointed my father, one of the primary things I have always tried to avoid?

No, because my dad knew there were things you just didn't take that seriously, like politics and the internet and the judgment of others. I suppose I inherited his sense of humour, too, one that not everyone shares but that is not based on hurting others but the kind of teasing you often find between people who like different kinds of tractors (or who hold different political views) and like to make a big show of it, but never with harmful intent.

And that is the story of Tractorgate 2014. I didn't write about it sooner for a couple of reasons, the main one being a desire to not have it appear that I was making any attempt to influence the election Monday (and, well, there was that recent brush with a fairly serious illness that kept me pretty tied up with visits to the local ER). Enough people have asked for the story, though, for me to write it now. Despite this post there will be those who will continue to believe I am a bully or that I was demeaning farmers or rural life, and I am ok with that because to do so is their choice, and what they think of me is absolutely none of my business, and I am quite ok with that, too.

At the end of the day I suppose I hope a couple of things. I hope those who know me well - and even those who only know me through this blog - know that this was all about a slightly unusual sense of humour. In case they did not I apologized on Twitter to anyone I had inadvertently offended, as I always will if I feel I have hurt others, even unintentionally. I hope that our new MP - who has now unblocked me and who I have publicly congratulated on his victory (and thanked for allowing me back into the fold) - has a sense of humour.

And - this is the big one - I really hope he is a Deere man, dammit. 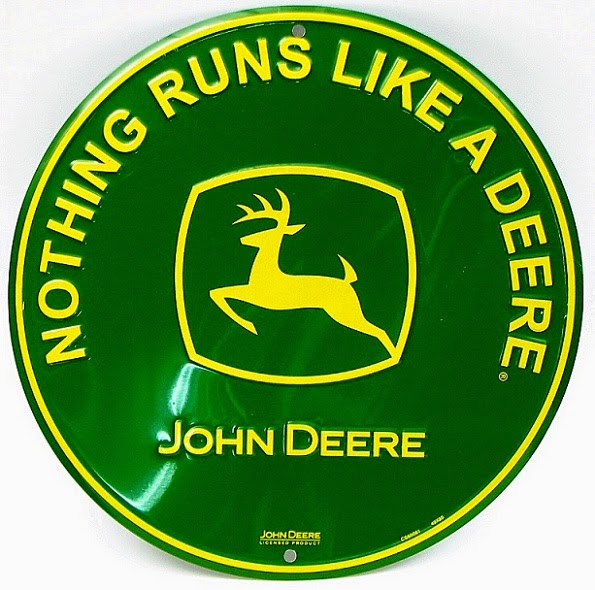