Intrepid Junior Blogger: I just finished my last PAT, yay! It was easy.
Me: Awesome, want a hedgehog?


Intrepid Junior Blogger: Wha?
Me: Do you want a hedgehog?


Intrepid Junior Blogger: Have you been drinking?
I wish I could say this is an unusual conversation for my daughter and I but these occur with a fair degree of frequency. In this case it all centred around a small spiky animal in need of a new home.

I found him on Facebook, a small creature who needed a new home as his loving owners were in a situation where they felt they did not have the time he needed. And it’s not that I was in the market for a new pet as I wasn’t really, but we have some experience with pet ownership (including three ferrets) and so I thought I would broach the topic with the IJB to see if we should add a hedgehog to the house (let’s be honest and just call it a zoo, shall we?).


The IJB immediately went into research mode, reading everything she could on hedgehog ownership. The rest of my day was text messages of links with directives to read this or study that, and a lot of text messages like this one:
Are you sure you want a hedgehog? Are you ready for the responsibility?


Some days I wonder who the parent is in the joint as it was beginning to feel distinctly like I was the one asking permission to bring a new pet home and the IJB was in the position of decision maker. By that evening, though, we had an answer.
The wrinkle in the story is that the IJB was headed to Calgary for a month before I could even collect our new family member, and so I have been texting photos of our new creature to her on a regular basis. His new name is derived from an anime character: Ciel Phantomhive, an individual with spiky hair. The “phantom” part seems appropriate as Ciel is a reclusive little bugger, rarely seen during daytime hours although I know he comes out at night to eat and drink and run on his wheel. 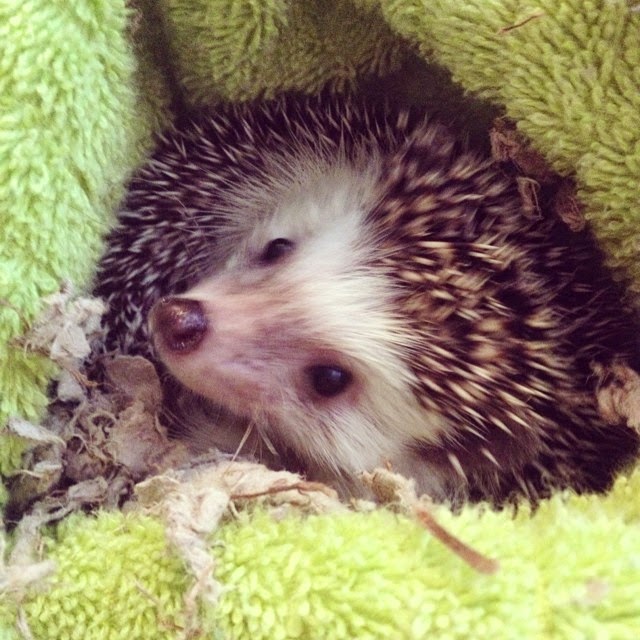 Ciel is indeed a prickly little beast both in terms of his physical presence and his personality. He tends to puff and huff and hiss and poke up his spines whenever he is disturbed, and takes some time to warm up and begin to explore (he has now licked me a few times and attempted to nip me more than once). Picking him up involves a thick towel and I don’t suggest holding him on your lap while wearing shorts (I learned that one the hard way when the cat expressed too much interest and I suddenly had a small hissing ball of spines on my lap). When he does warm up, though, and begins to explore you see a tiny little inquisitive nose, a soft little underbelly and a creature who looks a bit otherworldly as it trundles around on your floor. 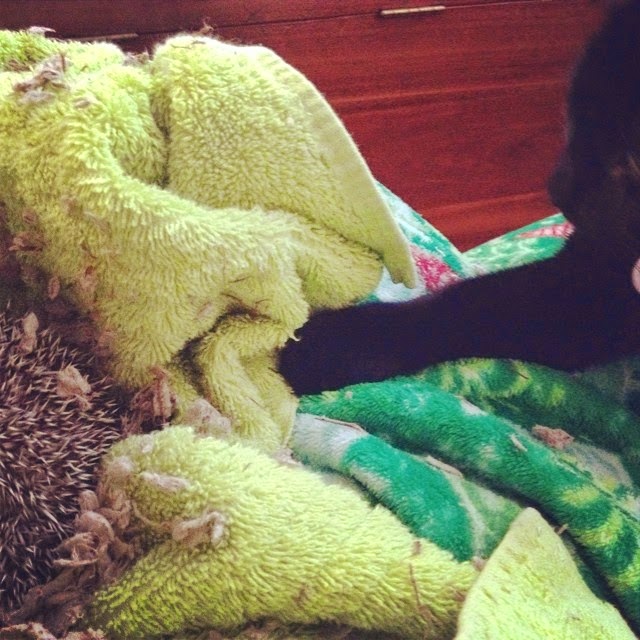 Now, Sirius Black Cat is completely amazed by this new addition. SBC has the dog pretty much under control, and has come to a point of standoff with the weasel gang, but the new hedgehog has him perplexed. He will reach out a paw, touch a spine, and quickly withdraw to reflect on the torment of his excessive curiousity. To satisfy him I have begun to place Ciel in a small plastic ball, which he rolls around in to explore in safety with a small black cat about two inches behind him all the way. 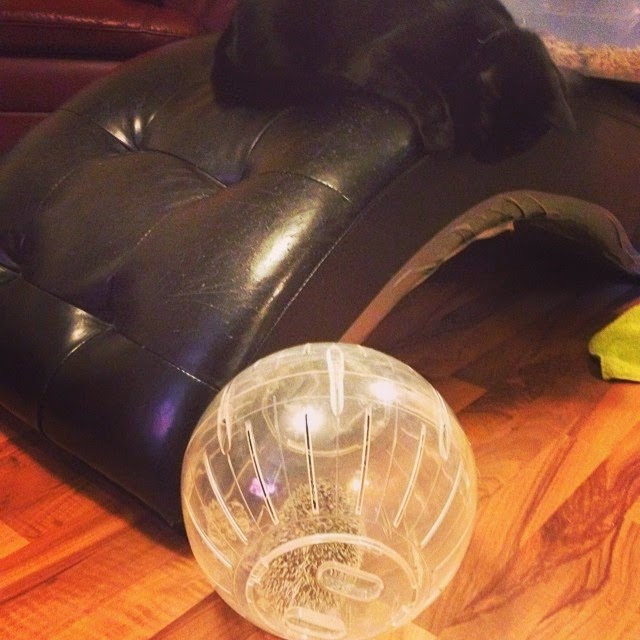 One night, very late, I woke up and heard a small “whirr whirr whirr” noise. I had not yet seen Ciel in action on his wheel so I grabbed a flashlight and crept down the stairs, shining it in (and of course as soon as shy hedgie saw the light he became a small immobile lump of hissing spines). When I moved the flashlight to the top of the cage what I found was a small black cat draped on top of it, completely transfixed by his new obsession (and I now understood why the cat is always so damn tired in the mornings). 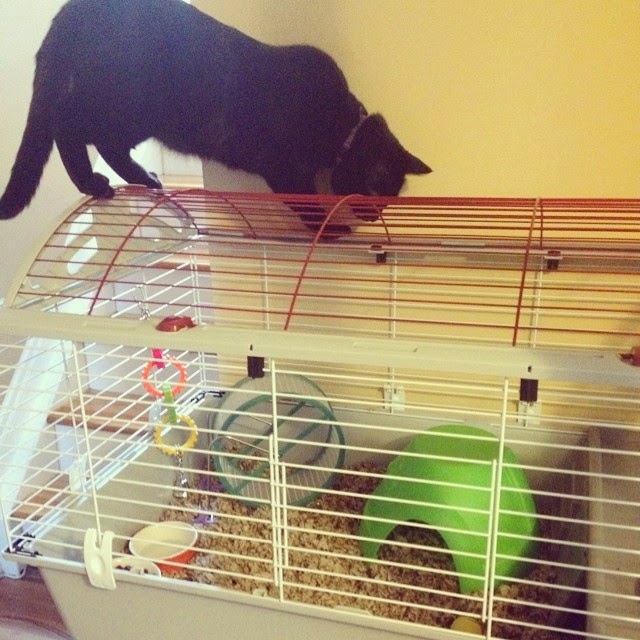 I am learning a lot about hedgehogs. I have learned he likes sweet potato baby food, although he is a messy eater and gets it in his spines and then needs a bath. I have learned that while he is a cranky soul he can be quite sweet, and frankly I like a challenge now and then. I have learned the IJB is an incessant demander of photos of our new pet as she has yet to meet him. And I have learned that even though I was not sure we had enough room for another creature on this Noah’s ark of ours there was, in fact, more room at the inn.


But that’s it. As I loaded up a cart at Wal-Mart recently with kitty litter, ferret litter, kitten food, canned dog food and pushed it out to the car on just one of my three stops for pet supplies (the other stops involved the pet store for the dog’s specialty food and the vet clinic for the cat’s prescription diet) I realized I am dangerously close to becoming the “crazy pet lady” caricature.
The only problem is before she left the IJB dragged me to the SPCA where we began looking at cats, because she is thinking a second cat might be a nice addition. And when you already have one dog, one cat, three ferrets and one hedgehog what’s another one, really?


Come to think of it maybe I should take up drinking, because I think it might be the only thing that keeps me sane. And frankly it has to be cheaper than running a zoo.
at July 15, 2014