Connecting to the World through the Art of Zhen Shan Ren (Truth, Compassion, Tolerance)

I stand there in silence, a deep unease filling me somewhere around my chest. I have just walked out of my office and found the painting directly across from my doorway, and the eyes of the young woman depicted stop me in my tracks. I cannot look away, but it is not because of the amazing quality of the piece (and the quality is amazing). It is because the piece has caught a piece of my soul in some way, and in that instant I feel a connection to it that I don't quite understand and will take some time to figure out. It is my first encounter with the art work of a new exhibition at the MacDonald Island Community Art Gallery.

As part of my role with the Regional Recreation Corporation I have begun to act as MC for the opening receptions at the art gallery housed in the hallway just outside my office door. I have been pleased to MC these events as I have met a wide and wonderful variety of artists and art patrons and had the opportunity to enjoy some incredible exhibitions of various types and themes. The new exhibition, The Art of Zhen Shan Ren International Exhibition, has come a very long way to Fort McMurray as it is mostly comprised of works by Chinese artists, and it centres on Falun Gong, a meditative practice outlawed in China in 1999.

The coincidence in my world is that when we were in Toronto recently the Intrepid Junior Blogger and I were hanging out at Nathan Phillips Square when an Asian man approached us. Middle aged and eloquent, he asked if we knew anything about Falun Gong, and when we replied we did not he spent some time with us explaining the practice, the meaning it has for practitioners and what has happened since it was banned in China in 1999. He explained he was a practitioner of Falun Gong, and that when the practice was banned he was subjected to daily threats and intimidation. He was told he would lose his house, his job and his family. As other practitioners began to disappear never to return he realized his life was in danger, and his choice was to either denounce Falun Gong or leave China forever. Fortunately he had the option to leave and so he did, coming to Canada where he could live a life free from such intimidation and fear and educate others about Falun Gong. It was an intense conversation, and the IJB was just as intrigued and alarmed as I, particularly when he shared the details of the shadowy harvesting of human organs in China, many of which seemed to be coming from prisoners who were members of the Falun Gong.

When we left the park the IJB, who is both a natural and trained skeptic, turned to me and asked if I thought what he said was true - could he be making it all up? I said I didn't know for certain, but that I knew I believed in both our capacity as humans to do tremendous good and tremendous evil - and so we went back to the hotel and we read about Falun Gong, learning the many truths of the stories he told us that day.

What a coincidence, then, that arriving back at work I found a note asking me to MC an opening reception for an international art exhibition depicting both the practice of Falun Gong - and the suffering of those who have been persecuted since 1999 by a government hell bent on total control of its citizens, including what they think and believe. 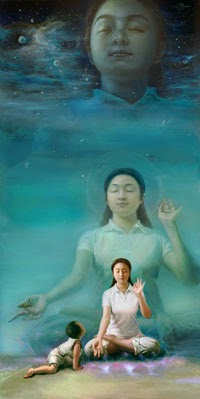 This is not an "easy" exhibition. Yesterday I walked through it in its entirety, marvelling at the beautiful works of art and the stunning quality of the paintings, enlightened by the ones showing the meditative practice - and heartsick at the ones depicting the persecution and sorrow of the devout practitioners who have been imprisoned, tortured and even executed for their beliefs. I kept reflecting on how complacent we are in Canada, how comfortable we are in our freedom of belief and expression, knowing that we can choose to believe and not lose our jobs, our homes, our children or our lives. By the time I reached the end of the paintings I had to go sit in my office for awhile just off that hallway in solitude as I needed some time to compose myself before continuing with my day. The impact was powerful and deep and combined with the conversation I had in Toronto brought home the real human cost of events in a country far, far away but to people who are in every important aspect just like me. 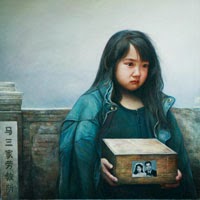 Today at 2 pm I will have the honour of acting as MC for this exhibition. The opening reception is free to attend and there will be members of the Falun Art Organization present, individuals who can explain Falun Gong and help others understand both the practice and the consequences practitioners who have refused to denounce it since 1999 have endured. This is much more than an art exhibition, you see, as it is an opportunity to learn more about the challenges others in our world face. It is a chance to stand in solidarity with those who are simply asking to be allowed freedom of belief and expression and who are seeing that request denied in the most horrendous ways. 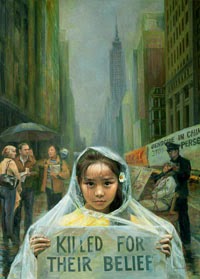 The Art of Zhen Shan Ren (Truth, Compassion, Tolerance) International Exhibition is an absolute Fort McMurray do not miss event. I would advise some degree of caution as the works can be powerful, particularly for those who find artworks emotional. The paintings are beautiful, intricate in every way and lovely - but it is the story being told where the true beauty, and pain, lies. Art isn't always about pretty pictures, you see. Art can be about learning, about understanding the world and even about challenging yourself to put yourself into the shoes of another person, to see the world from their perspective and see both their joy and their suffering.

It was very late Thursday night when I realized why the painting I had seen earlier that day had stopped me so completely. I was raised Roman Catholic, and one of the strongest images in that faith is the crucifixion, the classic pose with Christ on the cross, head slightly lifted. Once I connected the two, those many, many images of crucifixion in my head and the painting, I knew why it had such a deep impact on me. The painting had tapped into a deep emotional reserve inside me, one forged decades ago.

Go see the Art of Zhen Shan Ren. Go see it knowing you may be deeply impacted, go see it and learn more about Falun Gong, go see it and understand how fortunate we are in this country. Go see it and know that at some point you may find your eyes filled with tears, just as mine did late Thursday night when the connection was finally made in my head and the pieces came together as I thought about a middle aged man in a park in Toronto who had escaped persecution and the many others who never would. Sometimes art can even make you cry - and maybe that is exactly why art connects us on every level even when our nationalities and our country borders divide us. Maybe in the end that is truly what art is meant to do.
at July 19, 2014