2012 Harvest of Hope - And Honouring a Memory 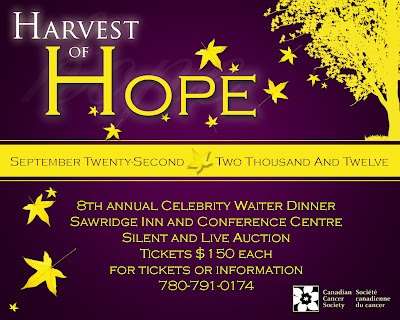 In 2011 I had the privilege of attending a lot of events - banquets and galas, dinners and receptions. There is one, however, that sticks out in my mind, for many reasons. It was one of the first, and I remember being so very nervous as I knew so very few people. It was one of the most fun, blending fundraising and entertainment in a way I had never before really witnessed. And for me the largest reason it sticks out in my mind as special is because it made me think about my father. It was the Harvest of Hope Celebrity Waiter Dinner, an annual fundraiser for the Canadian Cancer Society. And you see I lost my father to cancer almost seven years ago. 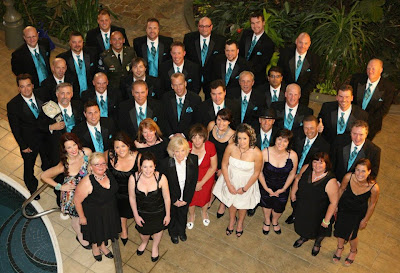 When my father was diagnosed with lung cancer it was the kind of blow you never expect and hope to never receive. It was a diagnosis that came with uncertainty, with pain, and with fear. It was the beginning of a long journey for him, and my family, that ended with his death in a palliative care ward. And it was the beginning of my understanding of cancer, as it had not touched my family before. It was the beginning for me of the ability to truly understand the concept of hope even in the face of adversity, as we never lost hope for my father. And that is what the Harvest of Hope is all about. 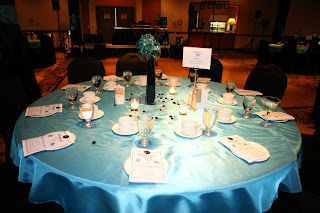 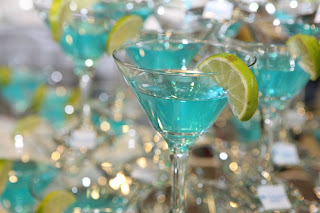 Photos courtesy of Harvest of Hope


The Harvest of Hope is an amazing event. There are, of course, the celebrity waiters, city councillors and MLAs and radio personalities and so many others. There is the auction, this year with items up for bid like a beautiful $20,000 diamond ring, trips on Via Rail and WestJet, chef's tables and fine artwork, and so much more. There is the live entertainment, and there is incredible food from the culinary crafters at the Sawridge. Most of all, though, there is hope. 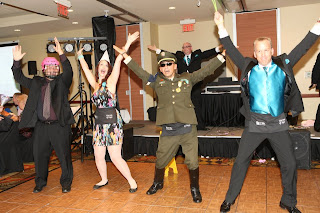 
One of the tragedies of cancer is that it can be such a devastating diagnosis that it strips away hope. But hope, true hope, is found in communities who unite to raise money to fight against diseases like cancer. True hope is found in a little room with an auction and a stellar menu and celebrity waiters competing with each other to raise the most money (last year I spent money willy-nilly on things like paying to see two male city councillors dance with each other - frankly I still believe it was the best money I've ever spent AND it made me feel much better about the property tax I pay here as I think one should get some entertainment for the money that goes into city coffers). True hope - real hope - is found in a room where every person in it has likely been touched by cancer, and where every person knows that hope is elusive, but not extinct. 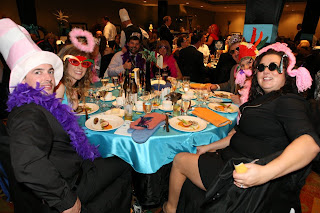 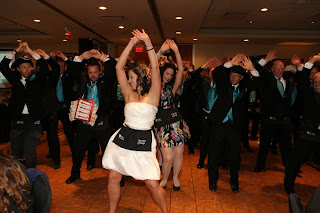 
It's hard to explain in words how much fun Harvest of Hope is. You can read about my experience last year, and I know this year will be just as much fun - and perhaps even more meaningful for me. You see, this year the Harvest of Hope committee approached me and asked if I would handle some social media for them - Facebook, and Twitter. I was delighted to say yes, and not just because I believe in the Canadian Cancer Society, or because the event is so much fun. I said yes for my dad, who lost his life to cancer almost seven years ago, but who is in my heart every day. I said yes because I want to honour his memory by helping to create hope for others, and by raising money for the fight against the disease that took his life. And, well, if I get to see two city councillors dance with each other along the way I consider that just a bonus, really. 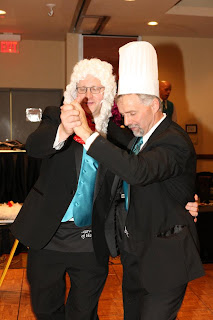 The 2012 Harvest of Hope
Celebrity Waiter Dinner
will be held on
September 22nd
at the Sawridge Inn.
Tickets are available through:
Canadian Cancer Society
780-791-0174