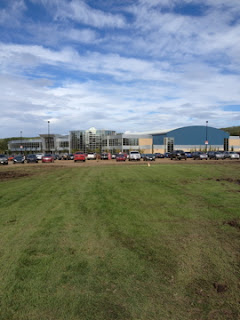 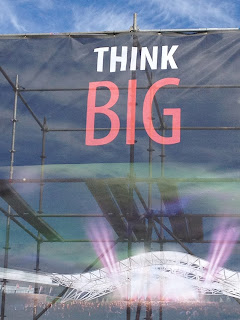 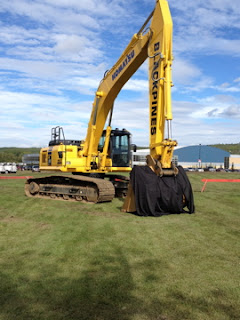 Some days in this region it all feels a bit deja vu. Another press conference, another grand opening, another ground breaking - the events begin to run into and on top of each other as our growth begins to ramp up yet again. This past weekend, though, I attended a ground breaking that is very special to me for many reasons. I attended the ground breaking ceremony for the expansion at MacDonald Island Park.

When we first arrived in this community a decade ago Mac Island was a small recreation centre. It was where the Intrepid Junior Blogger began skating lessons at 3 years old, and I still recall her tiny little snowsuit-bundled form trying to navigate on figure skates. As time went on Mac Island began to take on more prominence in our days as she went from preschool skating to Canskate, and, eventually, to figure skating. We got to the point where we were at the arena 3 or 4 days a week, but by that time Mac Island had changed and grown, just as the Junior Blogger had done. They went through an expansion, one that was bit painful for everyone in terms of cost over-runs and project delays, but in the end we had a wonderful new facility that rivalled any in Canada. And then it became clear that the time had come to do it again - because just as Mac Island changed and the Junior Blogger changed the community had changed, too, beginning to see another phase of rapid growth, and growth on a scale that we have not really experienced before. The Mac Island leadership in COO Tim Reid and the operating board decided to engage in some pro-active thinking and work towards a facility that would meet not only current needs, but the needs of the future. They decided, in essence, to "think big". 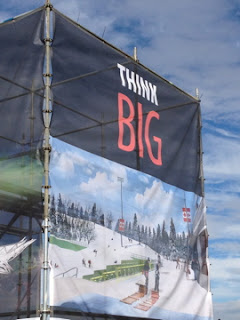 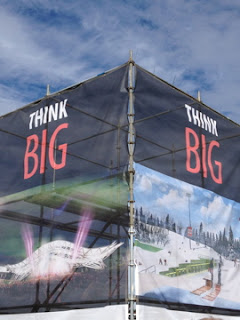 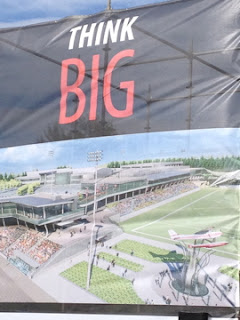 So, they devised some plans, and they engaged the public. And the public decided to think big, too, giving the green light to the board and Mac Island to present to mayor and city council the proposal to expand Mac Island into an even larger, even better, and even more stunning world class facility. The plans include an outdoor stadium, a non-profit hub for our local organizations, and so much more. I was honoured when Mac Island asked me to speak to city council on behalf of the community stakeholders, and I was thrilled when mayor and council approved the expansion - unanimously. It seems mayor and council decided to think big, too.

On Saturday of this past weekend I drove out to Mac Island, a place which has taken on even more significant meaning to me in the past couple of years. It is where I choose to address my woeful lack of physical fitness. I have worked backstage there as a volunteer at events and festivals, and thus have had the chance to work with members of the MI Team, many of whom I have become very fond (and proud). I have spent time with COO Tim Reid and his staff. I have eaten at the Fox Den Lounge more than once, and even arranged a lunchtime tweetup there (which they so graciously hosted). I have attended galas and events in the Nexen Field House, and I have taken the Junior Blogger there to see concerts. To say Mac Island has become central in my life doesn't truly do it justice - Mac Island has become a part of my heart, mostly because of the people within it.

When I arrived there this past Saturday, though, it wasn't for a festival or gala or concert. It was to witness the ground breaking for the new expansion, a chance to see the beginning of yet another exciting phase of the development of this community. It was a delight to see the MI Team out on the field with the "usual suspects" (as I refer to those who are always at such events, politicians and community leaders, and it's a term of endearment, not accusation). There were speeches from our local MLAs, the Mac Island board members, Tim Reid, representatives from the construction company and architects - and then our lovely Mayor stepped into the cab of an enormous golden shovel and dug the first bit of ground. 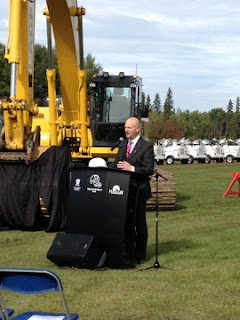 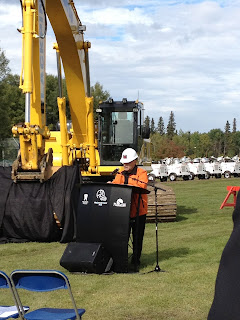 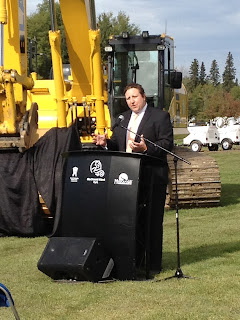 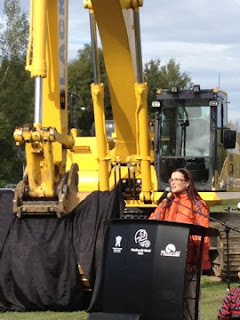 Look, we all know I tend to get a bit emotional, and I'll be very honest and admit this was an emotional moment for me. I was standing on the field where just weeks ago I saw Blue Rodeo, and K'Naan, and Hedley. I was standing there with people I have worked with and beside, and I have seen this expansion proposal come from the idea stage to the implementation phase. I can't imagine what a mess I will be when the expansion has the grand opening because waves of nostalgia overtook me on Saturday as I remembered driving a tiny 3-year old up to a tiny arena where she skated on a tiny rink with her tiny little hands in tiny little red mittens. I recall it very clearly, because she started lessons there in fall ten years ago, likely on a crisp September day not unlike Saturday. Just two weeks ago that tiny little 3-year old turned thirteen, and she is no longer tiny. She took the step from childhood into the teenage years. 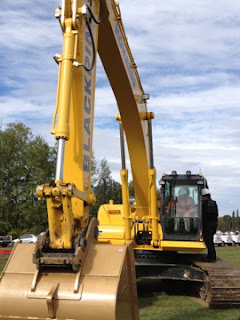 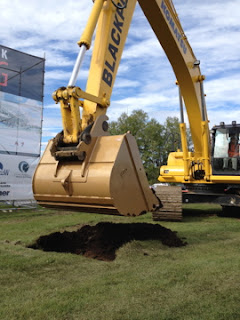 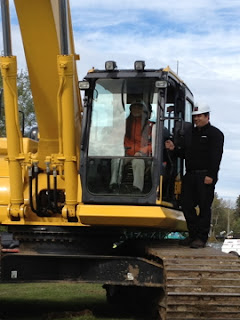 On Saturday MacDonald Island Park took a step, too. They took an enormous leap, in fact, a bold and courageous one into the future. It is a future that is so very bright, a future that predicts our community more than doubling in population. Mac Island, their leadership, the mayor, city council, and, most importantly, the residents of this community took a huge step into our future when ground was broken on an expansion that will see us become home to a facility of the kind that most communities can only dream about. And why did we do it, Mac Island and their leadership and the mayor and council and the residents? Because, people, in this region we choose to think big. On Saturday we all decided to "Think Big" together - and together we took a brave leap into the future of Fort McMurray. 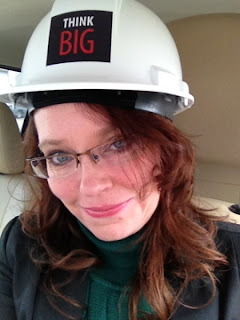 Stay tuned as the "Think Big"
hard hat and I go on
a little community adventure :)
at September 18, 2012