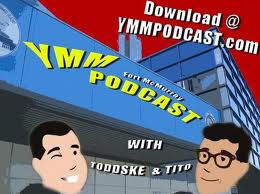 Once a (not very) long time ago in a place (not very) far away a woman started a little blog. She didn't think it would be very popular, and she didn't think much would come of it. She even thought she would write it anonymously, keeping her identity secret. And then this anonymous blogger sent an email to someone she learned had also started a new adventure. This new adventure was a podcast about life in Fort McMurray, and since the blogger and the podcaster seemed to have similar ideas on spreading a new message about life here she decided they should talk. And that's how I met Toddske from YMMPodcast.

It's funny looking back now, since at the beginning we were total strangers, Tito and Toddske and I. We shared some common goals but there were many differences - our ages, our genders and many other things. But we shared a common desire to do our part to broadcast a different message about living here in Fort Mac, a message right from our hearts, and right from those who actually call this place home. It's even funnier that I originally told them I would never appear on the podcast, citing my nerves and general reluctance to be in the public eye. Of course I've now podcasted with them several times, and they have even seen me cry right in front of them on one occasion. And over time, slowly but surely, we went from strangers to friends. And then we went from friends to family. And a couple of weeks ago Toddske and Tito and I met at the Dining Room Studios and we recorded another podcast - Episode 50, a monumental achievement and one I was completely honoured to participate in.

In Episode 50 we talk about things like film-making and writing and Huffington Post blogging and the Snye and Chateau Boo and the County Fair and the Draper Road dispute. You'll hear a lot of laughing (most of it mine, that annoying donkey bray I seem to have), and some swearing (most of that would be Toddske). You'll hear Tito being the voice of reason (he just has that gift, sometimes even astonishing me with his ability to see both sides and be the devil's advocate). You'll hear some ranting and some understanding. The biggest thing you'll hear, though, is a discussion between family around a dining room table. You'll hear our respect and admiration for each other, and how we each cheer on each other's success. You'll hear three people who started out on similar journeys around the same time, not really knowing where the path would lead. And in the end the path led us all to new roles in our community, in our lives - and in the lives of each other. The path led us to finding new family.

I was a bit upset yesterday. A concert had been announced at Mac Island, a concert I knew the Intrepid Junior Blogger would find interesting. The problem was, though, that the concert is the same night as Film Fear, the Halloween horror film festival Toddske and Tito launched last year. And the conflict is that I try to not miss anything they do, my pride in their accomplishments so strong that I want to be there to witness every triumph. I was a bit troubled, and so I told the Junior Blogger the options. I told her I would take her to the concert, but that it would mean missing Film Fear. And I didn't say anything else.

The Junior Blogger looked at me, and then she hugged me. She said "Mom, go to Film Fear. The concert isn't really a big deal to me, and I know how much the podcast guys mean to you". And that, people, is what family does. She knew my desire to be at the film festival and support Toddske and Tito was likely stronger than her desire to be at the concert, and so she gave me the gift of the ability to be there.

And that is why on October 26th I will be at Film Fear, hosted by YMMPodcast. I hope you'll join me as Toddske and Tito have brought some amazing things to this community, like Film Fear and the interPLAY Film Festival. They deserve all the support this community can give them. They have given so much, and I'd like to see others give back to them with their support.

The other thing I'd like you to do is take a listen to Episode 50. And if you like it then check out some of the earlier podcasts, because they contain some amazing moments, some I shared in and some I did not. For me, though, sharing in recording their 50th podcast was an absolute honour, because it was an occasion worthy of recognition and celebration. It was an evening with family - and those are my favourite kind.


My thanks to
Toddske and Tito
for giving me the honour of being a guest on
YMMPodcast Episode 50 -
Fifty Shades of Podcasting :)
at September 13, 2012