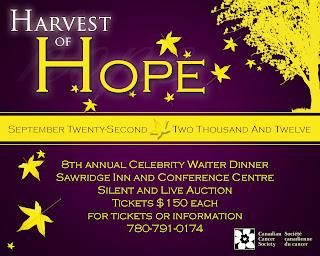 There are events that I attend solely as a guest, and I am always amazed at the work and love and attention that has gone into them, events like the SMS Wine Auction and Festival of Trees Gala and Keyano Gala. And then there is the occasional event where I have been involved in the preparation and planning, and I don't just marvel at the work and love and attention but rather know very intimately how much of all those things have gone into making it happen. And so it was this past Saturday night when Harvest of Hope once again brightened our community for an evening, and this time instead of just being a guest I participated as a member of the organizing committee. 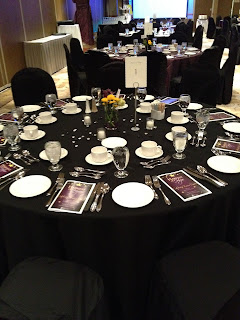 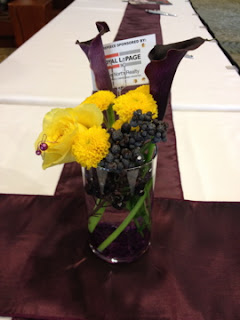 I attended the Harvest of Hope last year for the first time, and it was a profoundly moving experience for me. The event itself is uproarious fun, with celebrity waiters competing to make the most cash for The Canadian Cancer Society, and ridiculous antics galore. For me, though, it had a very personal edge as I lost my father to lung cancer just over 6 years ago, and my life forever changed the day he was diagnosed. It was a long journey for all who loved him, and it opened my heart to the journey of all those who endure cancer (and those who love them). So when I was asked to be a part of the promotions team for this year's event I quickly agreed, especially given that it involved using social media (and we all know Twitter pretty much owns my soul). I became a part of the team that brought the community Harvest of Hope this year, and it has been perhaps one of my proudest achievements in this community. 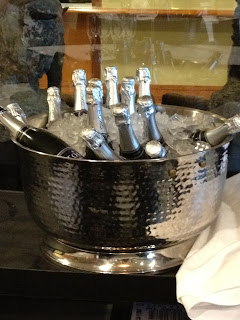 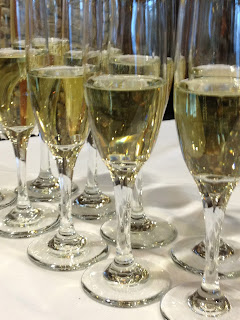 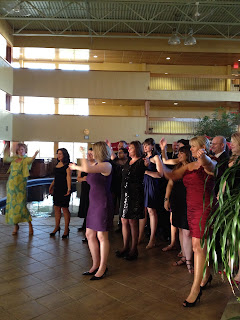 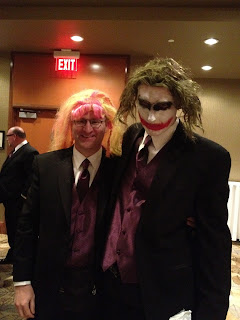 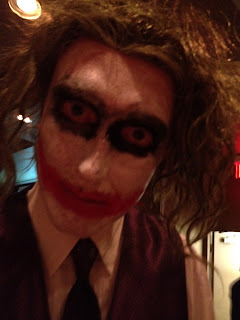 This year the Harvest of Hope welcomed 370 guests to the Sawridge Hotel. They were welcomed with champagne and the chance to purchase "funny money", the money used to pay the waiters during the night as they were enticed/forced/encouraged to do crazy things for cash. Prior to the dinner I had the chance to visit with our celebrity waiters in their private dining room, and was pleased to find many veterans but also many first-time waiters, too, those who had no idea what was in store for them (and I apologize for my evil little laugh when they told me they didn't know what to expect, but I couldn't help it - I knew what mayhem lay ahead!). Some were wondering how to raise cash so I offered the suggestion that they steal the cutlery from the table they would serve and charge each guest $20 to get it back - and as soon as I made that suggestion there was a mad dash of waiters running to steal the cutlery that the Sawridge staff had laid out so carefully.

Once the guests were seated the waiters were introduced and there was a brief session of Zumba - and then things started to quickly slide sideways as the true fun began. 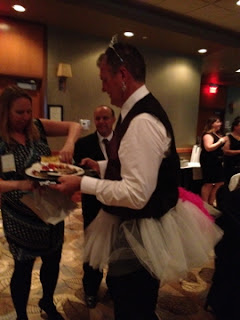 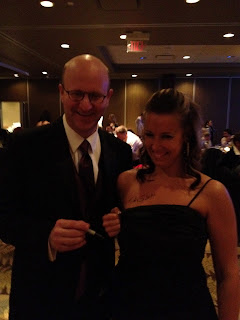 Almost immediately there was dancing, although not the traditional kind but rather the kind that saw one celebrity waiter, local MLA Don Scott, dance with one of the evening MCs (and city councillor) Phil Meagher. Don's "Rainbow Brite on speed" wig truly helped complete the picture, as did the cash the dance raised (and the moment only got better when dinner guest and mayor Melissa Blake cut in and poor Phil was left partnerless as she danced away with Don). Then the cream pies began to fly, and it was a night that saw local radio guys Jerry Neville (another MC) and Ben McCully (celeb waiter and committee member) wearing a lot of whipped cream, as did MacDonald Island Communications Director and celeb waiter Adam Hardiman, and MLA Don Scott. The pie-ing was so popular that Ben, who provided the pies, was having trouble keeping up with the demand and I began to be wary about being pied unexpectedly in the head myself. 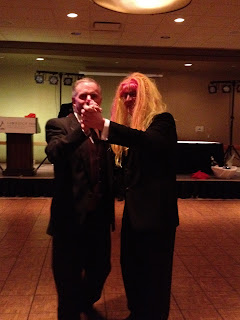 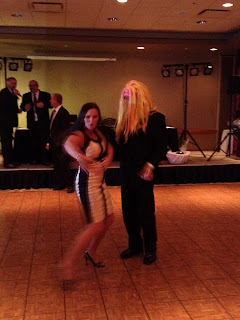 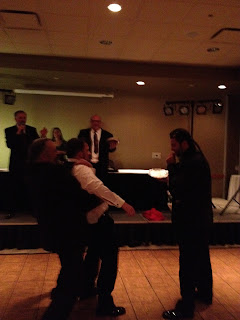 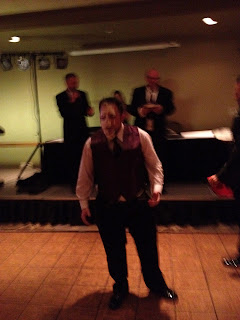 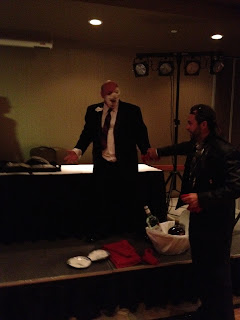 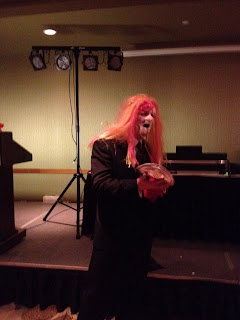 The evening rolled on, and dinner was served by waiters wearing wigs and tutus and baby outfits. Some of the zaniness is simply beyond words to express, and I was dumbstruck on more than one occasion by waiters who took everything to the next level of craziness. Items were auctioned off, things like liquor and other things the waiters had brought, and at one point during the evening I was at the back of the room when I heard my name mentioned on stage. I was immediately wary when Jerry Neville said my name as Jerry and I are friends and I figured any mention of my name simply couldn't be good, and I was right as he explained his intent to auction the shoes right off my feet by the end of that night (as they were quite stunning shoes the prospect of going home shoeless loomed large). The evening took a definite turn, though, when a young woman named Danielle was shown to the stage, and what Danielle proposed to do was explained. 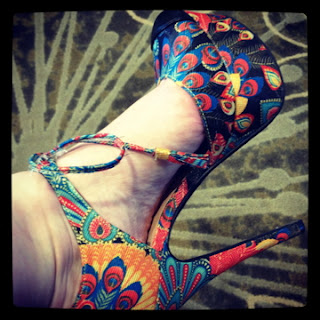 Danielle, you see, is a 24 year old woman recently arrived here from Sault St. Marie. She works at Prime Social Kitchen in the Radisson Hotel in Gregoire, and she is a lovely young woman in every respect. But what Danielle suggested went beyond lovely and into heroism. Danielle, a young woman with gorgeous long raven-coloured hair, asked the gathered guests to raise $10,000 - and if they did it she would shave her head right then and there.

I think I gasped, people. You see I am a woman, and I understand a wee bit about hair. I understand the attachment you develop to it, and I understood that what Danielle was offering was enormous. Donations came in quickly and quietly, and Danielle went back to her table to await her fate while the event rolled on, and into the live auction.

Several items were up for bid, and the bidding went fast and furious as VIA Rail Trips and WestJet flight tickets flew into the hands of the winning bidders. And then when the auction was all over it was time to announce how much had been raised for Danielle and the possible head shaving. The amount, people? A staggering $11,275. More than she had asked for, and more than one would think possible in such a short period.

I watched as a chair was dragged onto the floor, and a hairdresser and clippers appeared. I watched as a white tablecloth was wrapped around Danielle to protect her dress, and I kneeled in front of her with my iPhone as the hairdresser first gathered her hair in a ponytail and cut it off, those locks to be donated to a group that makes wigs for those who have lost their own hair to disease. And then the clippers began to buzz and I kneeled there and watched this beautiful, brave young woman smile through the entire process, a smile that lit up the room and made me want to cry a little, as proud of her as I would be of my own Intrepid Junior Blogger who is only a decade younger than Danielle. The clippers flew and hair dropped to the floor, and Danielle continued to smile. When all the hair was gone she asked if she could see a photo of herself and her new hair, and someone showed her their phone. I saw a very brief look of surprise on that lovely young face, a look quickly replaced with a proud smile. And then it was over, there was hair all over the floor, and the bravest and most beautiful woman in the entire city stood before us like a freshly-shorn lamb, smiling amid the cheers. And I won't deny it for a second - there were tears in my eyes that threatened to spill down my face, and I turned away before she could see them. 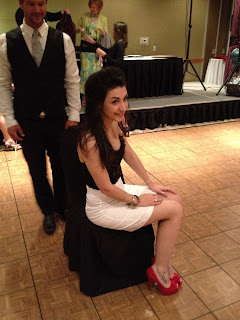 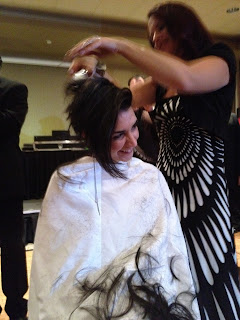 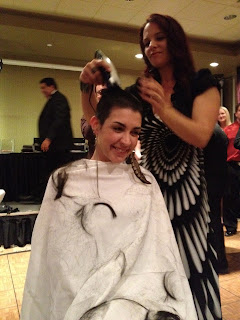 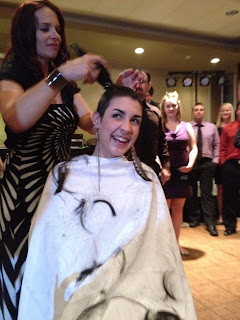 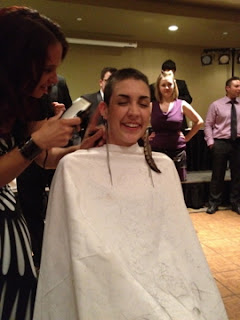 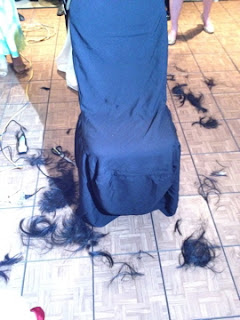 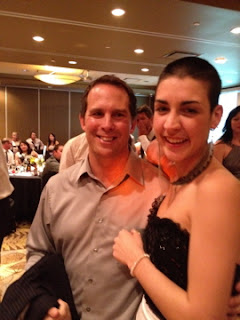 The rest of the evening is a blur, people. In the end the Harvest of Hope raised about $170,000, an amazing amount that will stay right here in this community. In the end there was dancing and some drinking and a silent auction and a live auction and cream pies and costumes and the Joker (my friend Blake who frankly scared the hell out of me whenever he would suddenly appear) and all kinds of craziness. In the end I left exhausted and Twittered out, having spent the evening tweeting thoughts and photos and retweeting the tweets of others attending. In the end, in the very end, there was something else. There was, for me, pride.

I know my father wasn't there that night, and yet he was. My father was there with me. his spirit living on in me, his stubborn and opinionated nature alive and well in this woman - and his hope. Because you see he never, ever gave up hope, not about anything, and nor do I, because sometimes hope is all you have to hang onto. I was proud of my dad that night simply because he gave his belief in hope to me, and that allowed me to share an evening of fun and food and hope with over 400 people from my community. You see, on Saturday night we harvested a lot of hope - and I am so very grateful that I was able to be a part of harvesting that most precious crop of all. 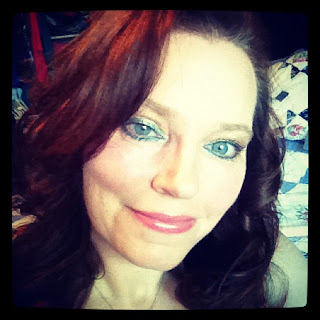 There are so many to thank!
Thanks to the
Harvest of Hope committee
for inviting me to join them,
to the Sawridge and their staff
for their wonderful food and service,
to our sponsors and donors,
to all our celebrity waiters and MCs
who made the evening fun,
to our wonderful guests who came
and opened their wallets and purses and gave,
to the Canadian Cancer Society
for all the work they do every day,
to Jerry Neville for granting me a reprieve
and not auctioning off my shoes,
and to a very brave young woman
named Danielle
who restored my hope that night.
at September 28, 2012