Break the Silence, End the Violence - and Take Back the Night 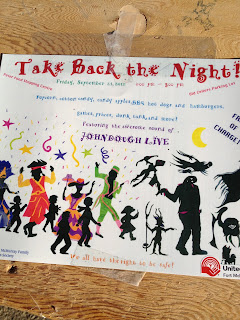 I love this community, and if you read this blog at all you know there is no doubt of that. There are things we are missing here, though, gaps in our community experience that trouble me. Some are minor, like not enough retail to satisfy my desire to support our fashion economy, and not enough (in fact, not any) Starbucks drive-thrus. But some are more serious, like our lack of social activism. Coming from the background I have come from  (growing up in a fairly large city, and being involved in various social activist causes) this has worried me, because a healthy community is one that is socially conscious and aware. Apathy is an insidious thing, and it is indicative of community ill-health - but I have been delighted to see a rise in social activism here, from the Twin 63 Now Rally in spring to the launch of groups such as Save Our Snye (agree or disagree with the ideals of those groups as you will, but recognize that at least they care enough to do something). And last week I was even more pleased when I attended the local "Take Back the Night" event and discovered that social activism is definitely on the rise here - and with the most important group, our youth.

Take Back the Night is an international movement meant to raise awareness of violence, in particular sexual violence, but it has grown to encompass all the forms of violence that threaten us both as individuals and as a community. This year the organizers at the Family Crisis Society decided to make the event more festive and give it a Mardi Gras or carnival feel - and they definitely succeeded. 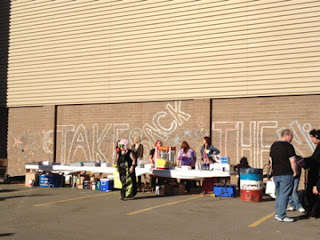 I arrived at the parking lot behind Peter Pond Mall to find the event already in full swing, and elder Elsie Yannick delivering a prayer and blessing (I have never met Elsie but I find the woman completely inspirational every time she speaks - her wisdom rings through every word she says). I wandered through the crowd, delighted to see signs and costumes and most vitally young people of both genders. This was what I really hoped to see and was so happy to find, because frankly the future doesn't lie with people of my age but rather with those decades younger. 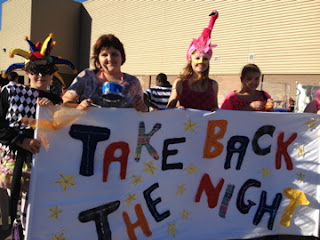 We marched as a group around the perimeter of the mall, and traffic stopped as I suspect many residents were puzzled as such marches are not common here. In other cities seeing social activism is hardly noteworthy but here it still gives rise to questions, such as the one asked to me by an older man who wondered what exactly we were taking back and why. When I explained it to him he nodded and smiled - because, I think, one must smile when you see such passion, no matter the cause, especially if the passion is in the form of our youth. 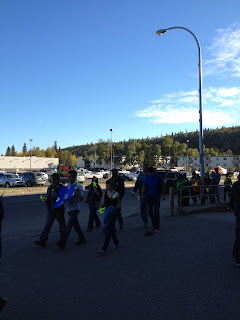 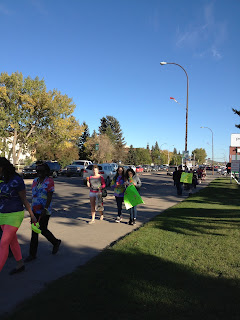 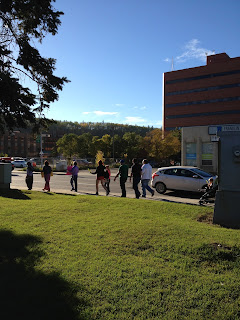 As I marched I took some photos and I thought about the people in my life who have been victims of violence. I thought about the friend who was the victim of a random violent attack this summer, and a friend who endured domestic abuse. I thought about all those in our city who suffer from violence in their lives, and as my thoughts often do they turned to other violence our community has seen, like the tragic murder of the young twin brothers just over a year ago. I thought about how violence rips at the fabric of our community and threatens to tear it wide open, but how we can mend those tears, and how we can strengthen the fabric against future attacks. I thought about how events like Take Back the Night indicate our unwillingness to stand idly by while violence is perpetrated in our community, and about how we each as individuals and as a community can act to end it. The march and event may be symbolic, but what it symbolizes is the important thing. It symbolizes our determination to end violence by saying that we will not tolerate, accept, or condone it any longer. It symbolizes our resolute belief that we CAN end violence, and we believe in that so much that we choose to spend our Friday evening marching and dancing.

Oh yes, did I mention the dancing? After the march ended in the parking lot music played and the gathered youth began to dance, and it could not have been more fitting, or more wonderful. It was wonderful because there is joy in taking a stand. There is joy in standing together as a community, and there is joy in the belief that you can make a difference. There is joy even in the face of violence, and sometimes you just have to dance.


My sincere thanks to the
Family Crisis Society
for organizing
Take Back the Night -
and to all those who participated.
You CAN end the violence. 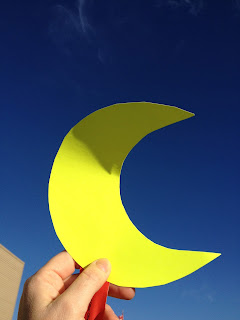