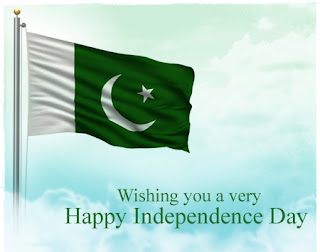 One of the things that always seems to surprise visitors to our community is our amazing cultural diversity. We have many nations represented here, a situation that becomes clear in schools that try to display a flag from the countries where their students originated and end up looking like an international flag store, with dozens of brilliantly coloured flags lining the walls of their gyms. I especially love that we often have celebrations here that revolve around our cultural communities, and this past weekend I was delighted to be a guest at Pakistan Independence Day - and to have the chance to celebrate 65 years of independence with them.

I have the honour of knowing many individuals from our Pakistani community. They are devoted to the country of their origin, but also to their home in Canada. They are active in community events and activities. They honour their origins in Pakistan while embracing their present and future in Canada, and I feel so very privileged to know them. They have also welcomed me into their fold, and I have been more than pleased to find a community that is warm and inviting. So, when I received the invitation to Pakistan Independence Day I was so happy to agree to attend, as I was looking forward to seeing the colourful clothing, enjoying the celebration - and, admittedly, eating the food, as I am a fan of Pakistani food.

When I arrived at the Syncrude Sport and Wellness Centre Saturday night I immediately noticed the colourful dresses on the women and children. And I was even similarly attired, having purchased an outfit from Pakistan at local store Nisa Collection (and just perfect for such an event). I love clothing, as many know, and I love the colours and sparkle of Pakistani clothing. It is so beautifully festive, and one can't help but feel celebratory wearing it. 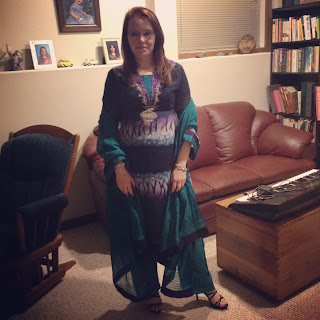 I was shown to a table right in front of the stage, a table I would end up sharing with people like Mayor Melissa Blake, and MLAs Don Scott and Mike Allen. It was such a privilege to be treated like an honoured guest, but the best was truly yet to come as the celebrations began in earnest.

I can't quite describe my delight at seeing dozens of children singing "Oh Canada" - and then waving flags from Pakistan and singing that national anthem, too. The reverence and affection for both nations was so clear, and I could see a community that has embraced their home country and their new home, too. It was a genuine pleasure to see the children perform, and then to see the men dance, including our own MLAs being drawn into the mix. There were the usual speeches and addresses, and there were the usual acknowledgements and thank yous. And then there was the food, glorious, glorious food that was spicy and flavourful and wonderful (while in the serving line one of the servers seemed quite concerned that I was heaping my plate with Pakistani dishes and ignoring the pizza, but I explained that given a choice between pizza and Pakistani I would go with the latter every time). 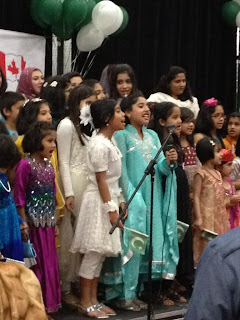 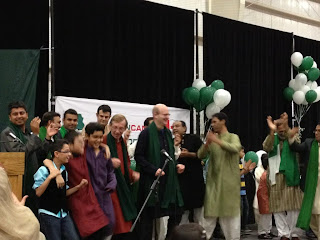 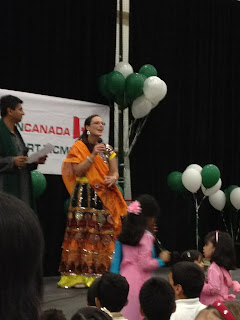 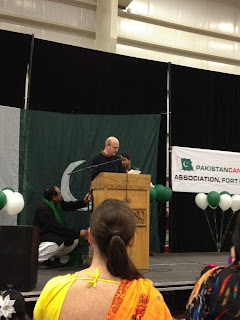 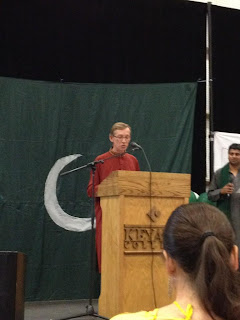 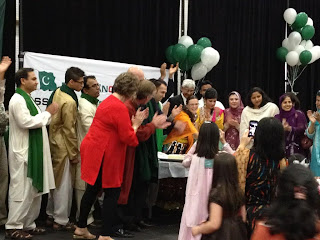 While I ate the food I chatted with my table mates, and I watched the young boys dancing on the stage, blending what appeared to be some traditional dance moves with more modern hip-hop. The smiles were infectious, and their delight so clear. It was, quite frankly, a party of the very best kind, a celebration of independence and community and culture and family and nationality. It was the kind of evening where you couldn't stop smiling at the joy around you, and where the sense of national pride - pride in both Canada and Pakistan - was so pervasive that you could feel it. 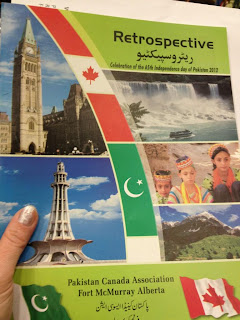 After I finished eating I decided it was time to leave, so I thanked my hosts and said my good-byes. I walked out into the cool September evening and I thought about how there are so many misconceptions about this community, about how people from other places likely have no idea about our diversity. I thought about how just as the Pakistani community has embraced Canada they have also embraced Fort McMurray, and about how this little northern community has also embraced them and their culture. I suppose I got that warm and fuzzy feeling I get when all seems right in the world, and when I have just attended a great party. I pulled my beautiful teal and purple scarf around me, a scarf that came from Pakistan, a country so very far away but that felt so very close on one celebratory Saturday night. I drove away wrapped tightly in my Pakistani scarf, and wrapped even more tightly in my own affection for the people in this place I call home.


My genuine and sincere thanks
to the
Pakistan Canada Association
for inviting me to participate
in the celebration of
Pakistan Independence Day -
celebrating 65 years of independence! 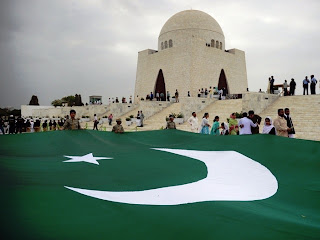