May Long Mayhem - Roller Derby On Fire In Fort McMurray 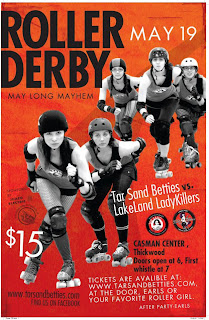 Without a doubt the poster caught my attention. An actual roller derby bout, right here in Fort Mac? I was intrigued. Actually, I've been intrigued by roller derby since I wrote about The Tar Sand Betties some time ago, long before they had planned a local bout. So, when I saw the poster I knew what the Intrepid Junior Bloggers and I would spend Saturday night of May long weekend doing - which is how we found ourselves at the Casman Centre looking for parking for the very first roller derby bout in Fort Mac, with the Tar Sand Betties hosting the Lakeland LadyKillers.

While the poster said the doors opened at six I figured we had time to stop at Starbucks for some coffee, which is why we arrived closer to 6:30 - and couldn't find a parking spot. I was actually a bit boggled by that, as I had been worrying that the roller derby bout would not attract a good crowd, but as soon as I pulled into the parking lot I realized the level of my miscalculation. I finally found a spot, and we headed inside, the Intrepid Junior Bloggers, myself, and one of my best friends who happens to come from England, a place with no history of roller derby. When I had invited him to join us he had at first declined, but we convinced him in the end, and so he experienced his first taste of roller derby. It turns out about 1100 people attended the bout, which in this community is an astonishingly good turnout for a new event. I think the Betties have infected a lot of people with their enthusiasm, though (I know they did it to me) and so the crowd was quite huge, varied in age and gender. I was completely delighted, to be honest, to see so many people turning out for a new event.

I have been asked what I like about roller derby, and I suppose the answer is "almost everything". The action, the drama, the flair, the costumes, the personalities, the nicknames - but maybe most of all the women, competitive and yet with an air of camaraderie, tough on the rink knocking each other about but then stopping to help each other up when the whistle blows. I guess it's because it appeals to me as a woman, to see other women expressing that competitive spirit in a very tough way but also showing their ability to work as a team - and to even extend that to the other team, to see them as both competitors and friends. There is something very much about the female spirit in all that, and to see it so clearly visible just makes me happy. And besides, there is the knocking each other about, which is entertaining, too! 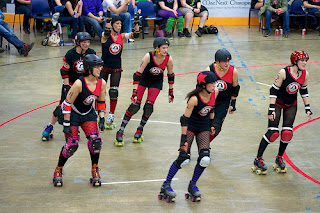 I'll admit it. I love roller derby, and the older Intrepid Junior Blogger was so interested that she has now expressed interest in participating in the sport. The younger Intrepid Junior Blogger was not quite as keen, and my British friend? Well, he was simply deeply puzzled by the entire thing. One of my favourite moments was when a young man seated in the crowd next to us tried to explain it to my friend, and my friend, a very bright man with a PhD, was nodding but I could clearly see he still didn't have a clue. Watching his face was pretty priceless, and I could see he was trying to come up with a way to describe roller derby to his mother back in England. 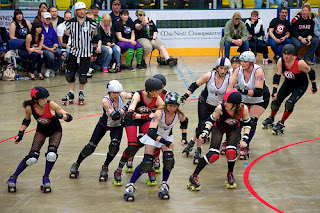 The bout itself? It was pretty terrific, especially towards the end when the Lakeland LadyKillers edged out our own Betties, winning the bout with a score of 129-125. The last few moments were pretty ferocious, lots of tumbling and whizzing around the track, lots of fast moves and action. And the funny thing is even though the Betties lost I think they won. I think they won in that this determined group of women formed a roller derby team, practiced like mad, recruited new members, became part of the community, and carved out a little niche for themselves in it. And then they invited another team to come for a bout and managed to attract 1100 residents to a brand new event which has no precedent in this city. If that isn't a form of "winning" I don't know what is. They might have lost to the Lakeland LadyKillers by 4 points but I think they won huge in the departments known as "personal accomplishment", "community spirit", and "achieving a goal". 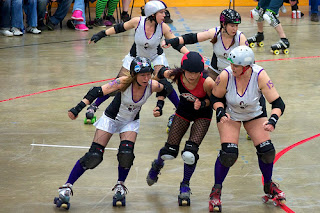 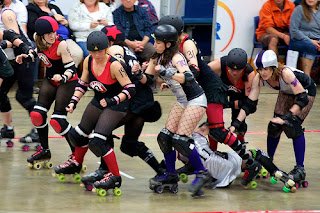 The Tar Sand Betties lost their first local roller derby bout Saturday night, people. But they won over a crowd of 1100 people, they won the admiration of young women like my older Intrepid Junior Blogger - and they won my heart all over again, just like they did the very first time I saw them practice. Funny thing is I suspect they won a lot of other hearts, too, a lot of hearts that now carry a little roller derby flame in them and a deep hope to see lots more roller derby bouts in the Fort Mac future. 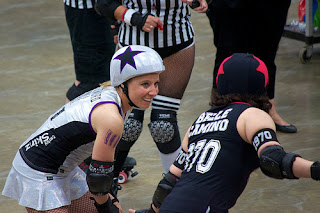 My sincere thanks to
Mark O'Henly
for sharing his fabulous photos with me,
and to the
TarSand Betties
for being brave enough to bring roller derby to Fort McMurray! :)
at May 21, 2012