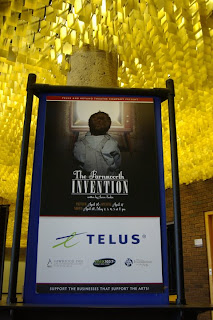 I'll admit it. I've been out of sorts the past two days, feeling like a freight train had barrelled through my life. One week ago today I was a quiet little local blogger - and then this past week I have been on national radio and television, and my quiet little existence got a little bit chaotic. I needed a chance to simply put all the noises in my head aside, a chance to sit and concentrate on something else, and a chance to simply not feel like crying - and I got that chance last night when I went to see "The Farnsworth Invention" at Keyano Theatre.

I had heard good things about the play as it has been running for a bit now. Some of my favourite local people happen to be starring in it, people like Russell Thomas (he was the very first follower of this blog and a supporter from early on, and has my gratitude for that alone). There were also people like Norm Sutton and Michael Beamish and Misty Oakes, people I have had the genuine honour to get to know in person and for whom I have developed deep respect. I didn't realize I would be so captivated by the story, but I was. It's the story of the development of television, and the drama surrounding it. It's the story of Philo Farnsworth, genius, and David Sarnoff, business shark. It's the story of a man broken and a man made, the story of a device that changed the world, the story of competition and human nature. And it's a stunningly good story, too.

You see I'm betting you've never heard of Farnsworth, an inventor who grew up in Utah. I hadn't either. But you've probably heard of NBC even if you haven't heard of Sarnoff, and NBC is the company Sarnoff headed. Sarnoff started off promoting radio. He wasn't an inventor or scientist - he was simply a "business guy", someone savvy enough to recognize the potential of  radio - and television. Farnsworth was an inventor, and from a very young age was inventing things far beyond the the imagination of most. At a time when most people couldn't even comprehend it he was talking about television, about how to make it happen, about the science that could make it reality. He was a man ahead of his time, as so many truly creative people are.

I'm not going to give the entire story away, because the play runs another two nights and if I give you the plot you might decide not to go see it - and I think you should go buy tickets right now, people. Russell Thomas is perfect as Sarnoff, a man who is ruthless in business but who you can tell has a bit of a conscience, one that just nags at the edges of his mind but doesn't stop him from achieving his goals. Michael Beamish is wonderful as Farnsworth, a creative genius with a touch of naivete about how the world works and how it will use his invention - and him. Russell and Michael play off each other so well, the business mogul and the inventor, so different and yet so similar, too. Elaine Bevans plays Farnsworth's wife well, a woman married to a man who is also quite married to his invention. Humberly Gonzalez as Sarnoff's wife Lizette is lovely, a woman married to another difficult man, a man married to success. The actresses provide a soft contrast to these two driven men, loving them but seeing their flaws so clearly, loving them despite those flaws.

And the entire ensemble cast is terrific. Everyone in the ensemble carries several roles, it seems, and every single one should be proud of their performance. Seeing my friend Norm Sutton on stage was a delight, and seeing one of my very favourite actors again, Francis Menningke, made me smile. Throw in folks like Misty Oakes and Adam Zacharias and the rest and I pretty much smiled every time an actor came on stage, just anticipating their performance.

While I won't give the plot away I will make some commentary on what it meant to me personally, particularly in light of the events in my life, and this blog, this past week. One of the things Sarnoff says during the play is that television will change the world. It will end illiteracy. It will end war, he says. And of course it hasn't, any more than radio did, or the internet has. Television has become both a tool and a weapon, a technology used to educate and entertain, and it has without a doubt changed the world - in both good and bad ways, too. And so the same is true of the internet, people. A tool and a weapon, a place for education and entertainment, and a medium that has changed the world for better - and for worse. This week the internet connected me to people I would have never in my life had the chance to meet. It connected our community to the entire nation in the wake of a horrific tragedy. What in the years before internet and television and radio would have been a local issue became a national focus of attention - the desperate need to do something about Highway 63. And I suppose in a sense we, Fort McMurray, have Philo Farnsworth and David Sarnoff to thank for that. They were involved in the creation of the mediums we now use to transmit our message to the world. They were fundamental in the development of television and radio, and without those two I doubt the development of the internet would have occurred, either.

At the end of the play Russell Thomas delivers a soliloquy on how we are meant to be explorers. We explore new territory, like those who discovered North America, and who were thought crazy as they were sure to find nothing according to common knowledge. We make ridiculous plans, like going to the moon - and then we do them, even when many people think we cannot do it. We invent amazing technology even when others think we are insane,  that we are wasting our time, and that it will amount to nothing in the end. We do things like Philo Farnsworth did, taking a bold leap into the future at a time when most people can't even imagine why we are doing it. We do things like David Sarnoff did, recognizing a brilliant idea and the implications, and seizing it (even when it might not truly be ours to seize). And we bravely embrace the new technology and ideas presented to us, sometimes not even realizing how it will change our lives. Thousands did that when they purchased a radio set so many years ago. Millions did it when television arrived. And millions more did it with the arrival of the internet, embracing a new technology that has changed the world - and lives. This week, with this little blog, it changed my life in ways never expected and never planned. And last night while I watched my friends, my community, bring "The Farnsworth Invention" to life I thought about change and technology and competition and innovation and invention - and about how a simple little play, well-acted, well-directed, and with an incredible story to tell, can restore some desperately needed balance in a weary blogger's life.


My thanks and a sincere "Bravo"
to the entire cast, artistic team,
and production team that brought
"The Farnsworth Invention"
to the stage at Keyano Theatre.
It was the perfect way to end
a wonderful season of live theatre! 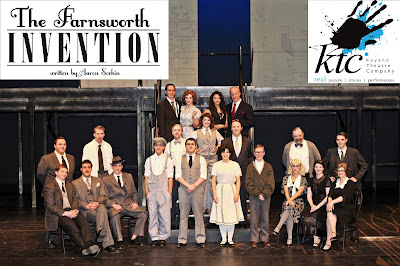