There are things I have found myself doing over the course of writing this blog that I never imagined. Many of those have been new experiences or new opportunities, things that I never even really thought much about. And some are so unexpected and yet end up being so profound that it takes me some time to process them. This one falls into this last category, as this week I was asked to throw out an opening pitch at the season opener for the Fort McMurray Minor Baseball Association - and it was anything but a simple baseball pitch for so many reasons, people.

Paul McWilliams, chair of the board for the FMMBA, contacted me late last week and asked if I would throw out a pitch on opening night. Why did he ask me? Well, this time they wanted to throw out not one opening pitch, but eight. Eight pitches, all being thrown in memory of the seven people and one unborn baby killed in the tragedy on the 63 ( I always feel like I should capitalize that into "The Tragedy On The 63" because that is how it feels to me, in capitals). He asked Mayor Blake, and our new MLA-elects. He asked the organizers from the protest rally, someone from the Justin Slade Youth Foundation board, an employee from Diversified, a pastor from a local church - and me, the blogger who wrote an open letter that went places she never expected.

I said yes when Paul asked, because I was genuinely honoured, and touched. When he explained the reasoning - how they have 42 teams of kids, and how so many of those kids travel on the 63 to attend tournaments, and how kids from other teams travel here to attend - how could I say no? I suppose I could have said no due to my complete lack of athletic ability (you have no idea, people, I can hurt myself climbing my own stairs), but I was honoured to be asked at all, and to be included in such fine company.

That's how I found myself practicing tossing a tennis ball on Monday afternoon with the older Intrepid Junior Blogger. Yes, a tennis ball, we don't own baseballs or softballs. After enough attempts to make my arm sore she suggested I wear a short skirt and heels to the opener, expressing her belief that only distracting the crowd would save me from embarrassment that night. I laughed, of course, being no stranger to public embarrassment, and then promptly banned her and the rest of my family from attending so at least there would be no photos to haunt me on Facebook.

Monday night I headed down to the baseball fields behind Westwood High School - and found it bustling with activity. Sport in this community is huge, as most of us know, but I had no idea baseball was this big, 42 teams big, from tiny little guys and gals to those who are in their teen years. As I wandered around the field I saw families - moms and dads and kids.

I didn't even really have time to get very nervous. I chatted with the other "dignitaries" tossing the first pitch -  that's what the paper called us the next day, and I was bemused as while I have been called many names "dignitary" has never been one of them - and we talked about the opener and the teams and the kids...and about The Tragedy On The 63, of course. Because that is why we were there, to commemorate those lost so recently.

As the teams paraded out onto the field in the "Parade of Champions" I smiled at the kids, seeing them so excited and nervous at the same time. I stepped out of the dugout where we were waiting to snap a couple of photos (and discovering to my horror that one of my best friends had appeared to take photos and videos, escaping the banishment I placed upon my family). I watched the kids and the teams, and I looked up into the crowd of parents and sibling and family members, and while it was a wonderful moment it was crushing, too. It was crushing because I kept thinking of one little boy who would never play baseball, one little girl who would never be on a team like this, one little boy who would never again play catch with his dad or mom, and the life of one child that ended before it began.

When my name was called and I was introduced I stepped out onto the field and joined the others. I was humbled to be in their company, really, people I have come to respect so much, and to admire. There were some speeches, and a lovely prayer, and then there was the opening pitch, all eight of us pitching our balls at the same time, eight catchers all lined up. My toss was high and wide and wild, of course, and my poor catcher had to run to retrieve it (my friend captured video he referred to as "maiming the dirt").

There was laughter, and handshakes, and smiles. There were some gentle conversations afterward, and the baseball season had been opened. The teams filed out, kids from their teen years right down to the very little guys you can't help but smile at when you see them in their tiny little jerseys. 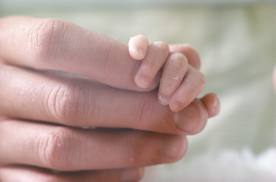