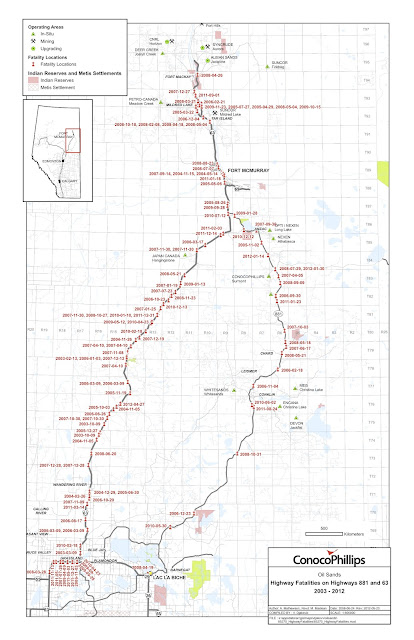 The map shown above has turned up several times in my email inbox in the last few days. It seems to be circulating widely, and it is attracting a lot of interest. It isn't hard to see why, really, given the accident just one month ago on Highway 63 - an accident that I believe may have changed a great deal both within, and outside, our community.

It's a simple map, really, just showing two roadways. Both of these highways, the 881 and the 63, serve our northern community. And, as you can tell by the map, both are dotted with little crosses - and, to be quite blunt, stained with the blood of our residents. Those little crosses aren't some sort of marker on a map, people. They are each and every one a life cut short, a story ended before it's natural time, a family left devastated, friends left grieving, and a community in pain. Each and every cross is, as I have written before, an arrow to my heart.

It hurts to think about the people those crosses represent. It pains me to even consider how brutally their lives ended, and how unnecessary it is. We all know by now that true accidents are very, very rare. Most "accidents" are preventable. Some of this prevention must come from twinning the 63 as quickly as possible. Some must come from increased police presence. And some must come from us, changing our attitudes and our habits, and learning to drive in ways that do not endanger ourselves and others. There is no singular simple solution. It is all those things that will see fewer of those red crosses appear on this map.

I've printed a copy of this map and put it up in my office. I've done this to remind myself of why we must continue to work to see Highway 63 receive the attention it deserves - twinning, and police presence. I've done this in the hope that I will not need to use a red marker to draw in any new crosses and dates. I've done this knowing I likely will, as statistically speaking we have seen a death on the 63 almost every month in the last 60 months (46 deaths in five years, so on average a death every 1.3 months). The last accident was a month ago. It doesn't take a genius to do the math to know that we will likely see another one in the near future if the statistics are any indication.

I want to thank every person who sent this map to me. I want to tell them that while they might think that I am doing something to ensure the safety of our community on Highway 63 they are doing so, too. The simple act of taking this map and sending it on, of making sure others see it, is doing something to work towards safety. It is raising awareness of the deaths on Highway 63. It is an action in a situation that has too long seen inaction. Each and every one of us can take an action. We can email our Premier, our MLAs and our Transportation Minister to request that they too take action on Highway 63. We can think about our own driving habits, and we can engage others in conversations about theirs. We can report those who are driving aggressively and endangering others. Each and every one of us has in our hands the ability to act - and, I think, in the past month, we have.

I have been intrigued to see that this story, even a month later, has not died down. Just last week the Calgary Herald was still running stories about the 63, and about the tragedies that have been played out on it. Even a month later the media attention is there, and that is a remarkable thing in an era where the media attention span is usually very brief. I think that speaks to something, really. I think it speaks to an acknowledgement of the importance of this region, and I think it speaks to the fact that this Highway touches the lives of people throughout our country. I still get emails almost every day from across the country, people telling me of family and friends who travel on Highway 63, and the worry felt for their safety.

This issue isn't going away, people. By June 29th newly elected MLA and recently appointed special advisor Mike Allen will present his recommendations to Transportation Minister Ric McIver, who will then take those recommendations to Premier Alison Redford. This might seem like it is taking forever but in terms of government and bureaucracy, which is typically tortoise-slow, this is practically occurring at light speed. And some of this is no doubt due to the continuing media attention - and the attention of the people in this region who are watching, and waiting, for action from the provincial government. Just as we have the power to act we know they too have the power to act, and we watch and wait for them to do so.

As I write this I am sitting and staring at the printed copy of this map on my wall. I look at the crosses and I wonder about each and every story. Some of the stories I know, and some I have heard. Some I have not heard, and some may never be told. But each and every story is one that ended on a highway in northern Alberta, and each and every one is a life ended far too soon and far too tragically. I don't want to see any more stories end this way, people. I don't want to see any more roadside memorials, and I don't want to see the red marker I have placed on my desk used to add any more crosses to this map. I look at the calendar and think about that statistic, every 1.3 months. And I stare at that damn red marker for another minute, desperately wishing I could toss it into the garbage can - but knowing, sadly, that I will likely be using it far too soon.

For all those who have asked what they can do
to keep this issue in the spotlight, all I can say is this -
do not forget.

Keep talking about it,
keep emailing those in provincial government,
keep thinking about your driving habits,
keep reporting those who drive in dangerous ways -
and keep the faith, because I believe in
the power of the people of this region to do anything -
including not adding any new crosses to a map.