Smart 63 - and Arrows to the Heart 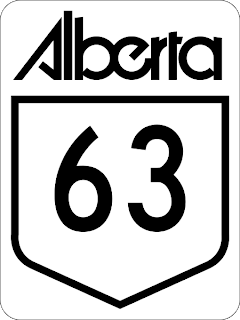 This past weekend I headed out of town for some R&R (and to support the Albertan economy with some good ol'fashioned retail therapy). On Thursday afternoon at about 1 pm I packed up the family and we hit the road - our first trip on Highway 63 since the horrific accident just over two weeks ago.

I'm going to admit a few things here. I don't enjoy being on that highway, and I refuse to drive it alone. I'm quite a good driver - cautious, attentive, careful. But I find the industrial loads intimidating. I find the speeds some travel frightening. And while I love the scenery along that highway driving it frightens me a bit, makes me feel insecure and out of control (and very, very few things do that to me, people).

When we got on the 63 on Thursday I hoped to see some changes. And I did see some changes - but what I saw wasn't good enough, people. What I saw troubles me because it seems despite seven recent deaths and an outpouring of grief and a protest rally and national media coverage we still aren't quite getting it.

Here's the deal, people, the very short story : We need to smarten the hell up before we kill ourselves - or other people.

Yes, the highway needs to be twinned, and desperately. The process needs to be expedited and we need to keep the pressure up to ensure it happens. To that end I'm sending an email inviting the new Alberta Minister of Transportation to come visit us - and drive the 63 - so I'll include his email address at the end of this post if you'd like to send him an invitation, too. But twinning will not solve all the problems, and I never thought it would. It will end head-on collisions but until it's twinned - and after! - we need to talk about the concept of "Smart 63".

I credit local Mix 103.7 radio host Steve Reeve with coining the #smart63 Twitter hashtag, and being the first to use it after the accident two weeks ago. You see, without being smarter on the 63 the "Twin 63" movement will mean nothing. We will continue to see carnage unless we talk about driving behaviour.

On the plus side I also saw a hugely increased police presence - no less than eight cruisers, and one radar trap. There is no doubt this beefed-up police presence will help, but they cannot be everywhere at once - so we have some responsibilities, too. And I see them like this:

1) Company vehicles driving at excess speeds or in an aggressive manner - report, report, report. To the police - AND the company. Emails were flying fast and furious to some companies today as I reported their drivers. Some I grabbed license plate numbers, some I got identifying vehicle numbers, and some I got nothing but a time and their approximate location on the 63. The companies know who is on the road, so I report and let them sort it out. And never once have I had a company respond poorly or with disinterest. They don't want their employees killed, and they sure as hell don't want their employees killing anyone else, for so many reasons, including lawsuits. I guarantee this - if someone in a company-owned vehicle is at fault and kills my family member I will sue them. Money won't bring a loved one back but I will be speaking in a language businesses understand: money. So, you see a company vehicle driving like a jackass? Report it. And don't even think twice about doing so.


2) Private vehicles being driven aggressively - report to the RCMP. Record the plate number if you can - and then make the call if you are safely able to do so, either pulled over to the side or through a passenger. One thing I learned from an RCMP officer I know is that they rely on the assistance of the public. They aren't going to make you feel bad for calling, and they aren't going to ignore you. If your help means one less next of kin death notification they must perform then they are more than happy for your help. Trust me on this one, people. They don't enjoy delivering that news, and would much rather talk to you than a grief-stricken family member.


3) Look at your odometer. Are YOU speeding? Slow down. Are YOU taking risks that you shouldn't be, passing aggressively, or exhibiting impatient behaviour? Stop it. There are no excuses. Getting there 10 minutes earlier isn't a good enough reason. Nothing is a good enough reason to risk your life - or the lives of others. And if you are with a driver doing these things? Speak up. This is your life at stake, not just theirs. And the lives of others. You have a voice. Use it.

Sunday morning we left Edmonton bright and early, and the traffic was light. It was going very well, in fact, no police presence but very few other vehicles on the road, too. The traffic began to pick up about midway through our drive on the 63, however. And then it happened.

I didn't catch the license plate, people. It happened so fast, her in our lane, and then darting back into her own as she passed another vehicle. Us, forced onto the shoulder to avoid a collision. But I saw her van, and I saw her face. And I won't forget them. If I happen to be in a parking lot in the future, and see that face stepping out of a silver van, I will be the woman approaching and quietly asking if she was driving on the 63 on Mother's Day. I will ask if she recalls the green car she forced onto the shoulder, and then I will explain that in that car was the most precious of cargo, the children I would fight and kill and die for. I will explain that her actions terrified me. I will explain how I felt when I twice passed a memorial at the side of the road, a spot of burned debris and a wreath that are the only markers for the deaths of seven people. I will explain how no one expects to die on a highway but how actions such as hers are the way it happens. I will control my anger, and I will speak to her in a way that impresses upon her that her choices behind the wheel of her car affect not only her, but me, too - and my children. I will explain to her that only by embracing the concept of Smart 63 will we save lives. Her life, my life, and the lives of our children.

So, there it is, people. We can rant at the government to twin 63, and it needs to be done, no doubt. We can cry for increased police presence, and while it will help it is not the sole solution. We hold a good part of the solution in our own hands every time we put a key in the ignition and head towards the 63. We have the power to control our own driving, and to keep a watchful eye on that of others. We have a responsibility to ourselves, and to each other. We can get the 63 twinned, and of that I have no doubt. I also believe we can create a "Smart 63", an environment in which aggressive driving simply isn't tolerated any longer. We can create a culture where this kind of driving is no longer the norm but rather an anomaly. We can take part of this right into our own hands, and we can control how many more crosses appear on that road, people. Because I will tell you this right now - that spot on the 63, that spot where there is some burned up debris and a wreath? That spot is an arrow to my heart. It hurts to look at it, it hurts to drive by it, and it hurts me to think of any other spots like it appearing on this highway. We need to aim for a Smart 63 - or be ready to take more arrows to our heart.


I encourage all Fort McMurray residents to send
a polite invitation to
Ric McIver, Minister of Transportation.
I would suggest simply asking him to
come and visit us in Fort McMurray -
and to experience driving on Highway 63 first hand :)
at May 15, 2012