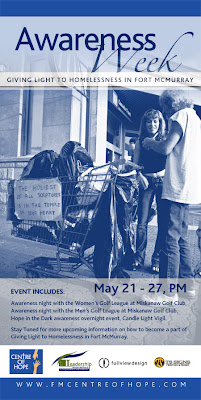 Well, people, this weekend I am going "camping". Okay, it's not really camping. It is sleeping outdoors, though, but in a parking lot, not in a campground. And while it will be outdoors it isn't really meant to be like camping. It's meant to be like being homeless - because it's the Centre of Hope's Hope in the Dark homelessness awareness event, and I will be there under the stars experiencing just a tiny, tiny taste of some of what the homeless in our community experience.

May 21-27 is Homelessness Awareness Week in Fort McMurray. This week is designed to shine a light on an issue in our community that is easy to forget, and even easier to ignore. But it exists, and it happens, and it is reality. I don't think forgetting or ignoring such realities makes them go away - it simply lets us live our lives and not be troubled by them. The thing is, though, that we should be troubled - because in the midst of affluence and plenty we have people who are sleeping rough on our streets.

There are a lot of misconceptions about the homeless - that they are all addicts, or that they have chosen to be there. People often don't realize the myriad reasons one can become homeless - mental illness, for instance, or even a career-ending injury. It's far easier to say it's a choice or a result of bad choices than to recognize that it can truly happen to just about anyone given the right set of circumstances, ones often beyond your control. I was stunned to discover some of our local homeless population had once been well-employed, but after an injury were unable to continue working. I was not stunned to discover some battle mental illness, as I always knew that part, but I was saddened to see that it continues to be a reason for homelessness, their illness simply being desperately compounded by life on the streets.

I have learned so much over the past year as I have spent time with the homeless in our community. There are individuals within it I would call my friends, and I have, I admit, invested in them emotionally. I have begun to care about them as people, and to have this deep desire to see them find happiness, and joy - and homes. I have found myself looking for them as I travel around the community, keeping an eye out for them and hoping they are okay. I have found myself wondering about the ones I don't see any more, hoping they have simply moved on to another city and not on to darker times. I have found myself thinking about them, often late at night when I cannot sleep, wrapped in a warm blanket. I think about them, and wonder where they are that night. I have thought of them at Christmas. I have thought of them as I put my daughter to bed, thinking about how each and every one of them was once an innocent child, too, no matter where and how they ended up.

I have never been homeless. There was a time in my life, decades ago, when I think I skirted that edge, when an injury or a mental illness could have easily put me on the streets of Toronto. There were times when my parents bailed me out financially, and where I might well have ended up without an apartment without that assistance. At the time it never even occurred to me that that could have happened, but now I find it a sobering thought. I think about how close to that edge I danced, and it has given me new understanding.

This Saturday night I will have a new experience. I will camp outdoors, but it isn't really camping. I will sleep in a local parking lot, wrapped in a sleeping bag. I don't like the dark, or the cold, or bugs. Someone has mentioned bears, and I am not very fond of those, either. I will likely spend the night wide awake, tweeting and texting and a wee bit fearful. I will likely be unsettled by the experience - and yet I know I will be safe, as I will have friends around me. I know that I will go home in the morning to my warm bed and my loving family. I will not truly be homeless, I will just be playing a role that night. And that is perhaps the most heart breaking part to me. I will be playing at being homeless while every night in this community there are those who are not playing it, but living it, warm nights and freezing nights, in the rain and under a clear sky. I will be going home Sunday morning while they spend another day on our streets - and another night. And even after a night of "homelessness", even after I have gained some awareness - I am sure I will have absolutely no idea what that truly feels like. I will have simply played a role and had a restless night in a parking lot. I suspect that night, though, I will spend a lot of time thinking about how a twist of fate in my life could have left me living the real thing - and about how others that I care about in this community are doing just that. And I think that maybe, just maybe, that is what awareness is. 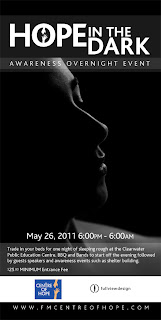 You can still register for the event
and join me for the night -
or you can pledge money towards the cause
by contacting McMurray Musings :)