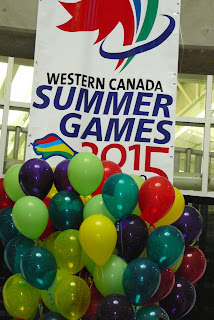 When I heard via Twitter that the selection committee for the 2015 Western Canada Summer Games was returning to our city yesterday I pretty much guessed that it would be to announce our successful bid for the games. When it was revealed that Tourism Minister Cindy Ady of our provincial government was accompanying them it seemed pretty clear it was a done deal, but I also knew I really wanted to be there for the announcement. Why? Because I'd attended the Jersey Day pep rally and this was a story I wanted to follow as the enthusiasm of that day had infected me, too.

So, I headed down to Macdonald Island Park. As I parked I saw the KISS stage construction going on, and there was this feeling in the air that is a bit hard to describe.  Ever hear the Jefferson Airplane song "Stop Children, What's That Sound"? The line "There's something happening here, what it is ain't exactly clear" kept running through my head - because, people, something is happening in this city. I'm feeling it every day, and it's not entirely clear what it is - but I think it might just be sheer excitement about the future.

I walked into the atrium at Mac Island, and found a seat in the area they had set up for the announcement. It appeared hundreds of people had the same expectation I did, and had decided to spend their lunch hour at Mac Island, too. The energy was intense, with balloons, boom sticks, and banners. The media presence was strong, of course, as they suspected the same thing  - that the announcement would be made, and another bit of Fort Mac history would happen right before us.

When the bid selection committee arrived they were greeted with cheers and excitement. I was so delighted when my favourite mayor (and maybe favourite person in the entire city) Melissa Blake took the stage to thank the people of the city for supporting the bid, and for showing such excitement and enthusiasm. My respect for this woman grows daily, people, and she once again made me proud. 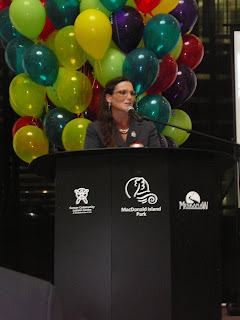 When Minister Ady took the stage she said there had been several strong bids for the games, and that the choice had not been an easy one. She pointed out that the bid selection committee had to look at several factors, and that the cities vying for the games had been in fierce competition. And then she said the words. The 2015 Western Canada Summer Games would be held in Wood Buffalo. 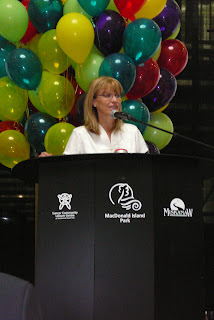 The cheers and clapping resonated through the entire building. Balloons, released from the second floor concourse, floated down to cover the floor below, and the whole crowd erupted into spontaneous handshakes, hugs, and smiles. It was a genuine display of enthusiasm, relief, and, quite frankly, joy. You could feel the sense of accomplishment of those who had organized the bid for Wood Buffalo, and you could see the pride on the face of every member of city council, municipality staff, and pretty much every Fort Mac resident in attendance (I admit - I was smiling just as large and clapping just as loud as everyone else).

People, my pride in this city is immense. More than that, though, my excitement about the future continues to build. Everything that gets marked on my calendar - every concert, every sports competition, every event  - makes me  feel that "Big Spirit" has stopped being an ad campaign and has instead become how we live our daily lives in Fort Mac. We have gone from being tentative about these ideas and dreams and have instead found some confidence. Can we host a concert with one of the most popular bands in the world and show them we rock? Yes. Can we host these summer games and show the country how amazing we are? Yes. Is there anything we can't do? I think once we would have said "yes" to that, too - but now I think we are more inclined to pause and say "You know, I don't think so. You give us the challenge, and we will rise to meet it".

When I wrote the first time about the games I said that I couldn't see any reason the bid selection committee would reject us, but that even if they did we still had the most important thing - Big Spirit. We still have that, people, and now we have the 2015 Western Canada Summer Games, too. Our Big Spirit just continues to grow, and slowly we will show the entire world just what that big spirit can do. See ya in 2015, people! 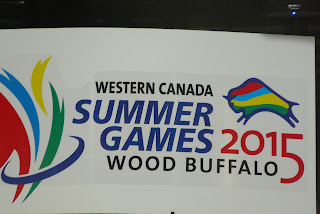