Why I Wish I Was Still In Junior High 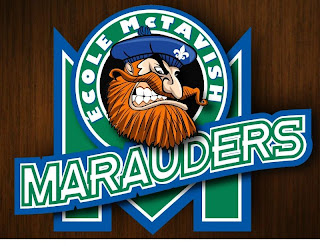 People, the title of this post shocks me as much as it does you. I never thought I'd want to go back to junior high as those weren't exactly stellar years for me in the social sense, but recently I've realized how much I'd like to go back to those days. Why? Because I could attend Ecole McTavish Junior High, that's why.

I don't know who else has been following the development of this school but I have been as I have a vested interest in the form of a kid who will be going there next year. I've attended all the public meetings they've had for parents, and last night I attended the first Parent Association/School Council meeting - and people, I'm beyond impressed and right into jealous of my kid.

The school itself is really impressive. It's looks like it's going to be an incredible building, and the options available to the students are equally amazing. There will be a robotics and engineering lab. There will be drama, and fashion, and sports teams, and a state-of-the-art media centre where they can produce their own televised news broadcasts. There will be the Edge dance and hockey programs. The options go on and on and on. More than all that, though, something else makes the school special - and that, in my mind, is the principal, Scott Barr.

I've written in the blog before about the respect I have for people of vision and passion, and Mr. Barr is a prime example. His vision, passion, and belief in this school is infectious. I know my kid was hooked the first time they heard him speak, and has just been growing increasingly excited about the school. The funny thing is I feel that way, too, because Mr. Barr has a way of making you see what he sees for this school - and people, it's inspiring.

Mr. Barr emphasizes two things : working to potential, and being a person of character. You don't need to be the smartest person as long as you are doing the best you can and working to be the best you can be - and that doesn't just mean academically. This aligns so completely with my own philosophy of education and personal development it astonishes me. His vision for this school is of a community, and a community that will largely be determined by the students. As he says he is the captain of the ship, but if all the students lean one way the ship does, too. He sees his job as guiding the ship but giving them the freedom and skills required to steer it successfully. It's just such a positive way to view kids at this developmental stage, and I'm so excited for all of them as they embark on this journey together.

Here's what I think, people. I think this is going to be an extraordinary learning institution for our kids. I think Scott Barr, and his staff, are going to be the kind of role models you dream of for your kids but fear you'll never find - and yet here they are. I think this school provides an exciting opportunity for all of us - children, parents, teachers, administration, and the community at large - to see a community coalesce and develop, just as the larger community of Fort Mac is doing. I think this school isn't just going to produce good students. It's going to produce a new generation of global citizens.

It's going to be fascinating to observe, and frankly I'm so excited that last night I offered to serve in a position on the new school council. Why? Because no one will ever believe that I am in Grade Nine and thus I can't sneak in and be a part of Ecole McTavish that way. I can, however, be in on the ground floor of what is sure to be a marvelous adventure. People - I can't wait. See you August 29th, fellow Marauders!
at June 21, 2011