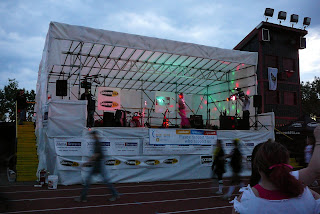 It was already growing dark on Friday evening when the whim to head to the track at Father Mercredi High School hit me. I knew that the 2011 Relay For Life was going on, and I decided this was the year I needed to check it out. Yes, that's right, people - it was my first time to visit the Relay For Life. I have no excuses, really - I've just never known anyone who was participating, and it's just never occurred to me to attend. All that changed on Friday. 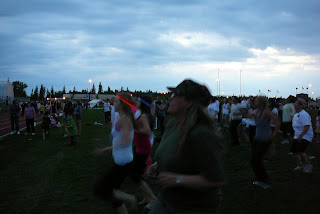 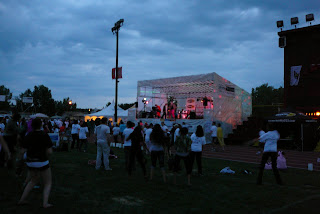 The first sign of the magnitude of this event was the parking lot. I pulled into the lot at the Casman Centre and realized that it was jam-packed. I mean, Wal-Mart on a Saturday packed. Thickwood Safeway on a Sunday packed. I hunted around until I finally found a spot, next to someone who had cleverly angle-parked, and I decided to follow their lead. I grabbed my camera, and headed out into the dusk.

I had no idea how big this event is. The rows of tents are the first things you see, and the large stage beside the track. I noticed dozens of people in the centre of the track were dancing, and realized to my amazement that while relay participants were walking the track there was also a giant zumba party taking place on the grass inside. I wandered around a bit, and checked out the various tents and teams. I noticed the variety of participants - all ages, from babies in strollers to the elderly. All nations seemed to be represented, too, with many from our immigrant community participating. The atmosphere was both festive and party-like and yet sombre, too.

Shortly after I arrived they announced that the luminary ceremony would soon begin, and the announcer asked everyone to find their luminary. The luminaries, small paper bags with holes punched in them, lined the track, and when I looked closer I realized that every single bag had a name and a message on it. They were messages for those who had been lost to cancer, those who had survived, and those who are still fighting for their lives. 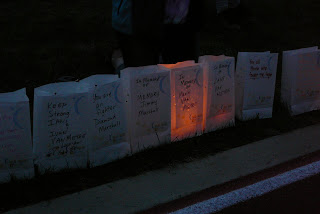 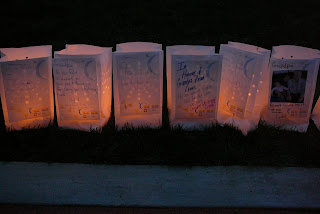 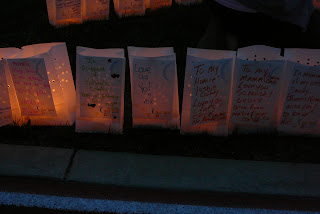 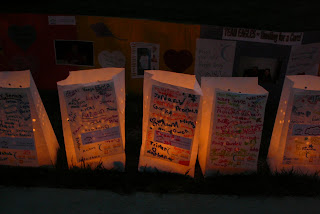 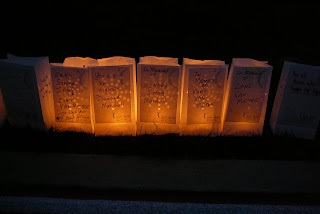 I walked the track and read the messages, and I watched those lighting the candles placed inside the luminaries. As they were lit I saw hugs, and smiles - and more than one tear, too. Some losses were clearly very fresh, and I had to turn away at points as tears formed in my own eyes. You see, I lost my father to lung cancer just about five years ago, and I know the pain that such a death leaves behind. 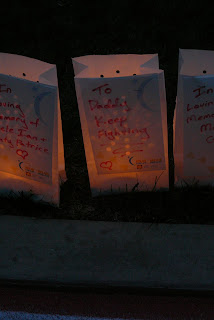 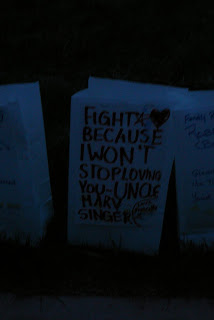 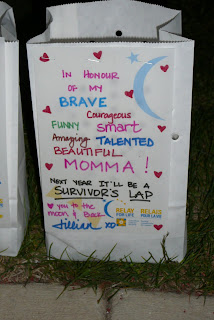 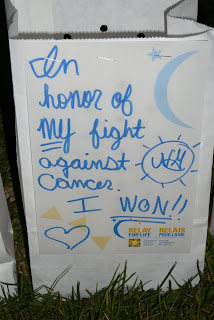 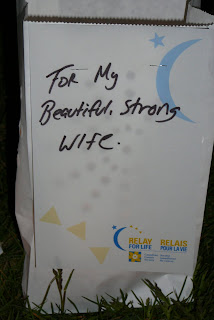 There was one message in particular that brought me past the brink of tears and right into a public display of weeping. There, on one luminary, scrawled in a childish hand, was this: 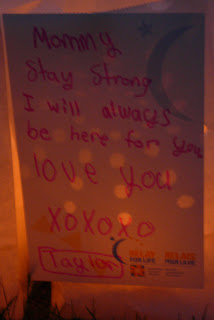 At that point I realized that the reason for this event had touched every single person in attendance. From the smallest child to the most elderly adult they had all known and loved someone who had been affected by cancer. I would imagine you would be hard pressed to find any human being on this planet who has not known someone with cancer, and it is a disease that we have all come to know in it's various insidious forms. I looked around that track at the hundreds of people who were all there for a common cause - to raise funds to find a cure for cancer - and realized that we all had a very common bond. 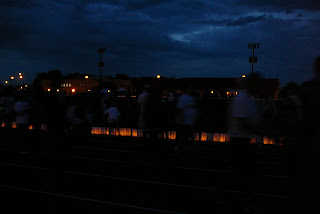 People, if you, like me, have never attended the relay I urge you to go next year. Perhaps even form a team, or join one if you are invited to do so. I rarely sense the kind of goodwill and community I sensed on Friday evening, and it was all because we share this bond, this love of those who have endured a tragic disease, and our commitment to them. This was about a community far larger than Fort McMurray. This was about the community that encompasses all of us.

After a while I went back to the parking lot and found my car. I quietly got in and found the song on my iPod that I thought best suited the moment. It is a lovely song, and one that I think of when I think of those I have lost. It was played during the luminary lap at the Relay for Life, and I'd like to share it with you. I know I will always remember those I have lost, and I know that on Friday night hundreds of people gazed at those beautiful luminaries glowing in the Fort McMurray dusk and were lost in memories, too.