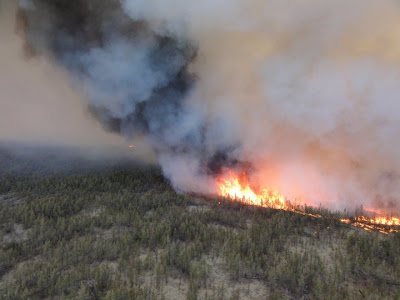 Well, people, it's official. The Richardson Fire, located in northern AB, is now officially the largest Alberta wildfire in the last 50 years. At 511,000 hectares this is one monster wildfire - six times the size of the city of Edmonton - and it's still out of control. For some reason that "biggest fire in 50 years" isn't really a claim to fame that makes me jump with joy, but it's just the reality.

The last few days Fort Mac hasn't seemed all that smoky. Either we've become accustomed to some level of smoke in the air or the wind is blowing the smoke another direction (and wherever it is going all I can say is "stay indoors!"). Regardless it's quite easy to forget exactly how massive this fire is, so I found a map that has been provided by Sustainable Resources Development. Looking at that map is actually a bit terrifying. Until you see it visually mapped it's quite easy to think of the fire as minor - when it's anything but small.

So far the fire hasn't directly threatened any communities, although some of the work camps further north have been evacuated on and off due to smoke conditions. It's our good fortune that this fire is burning in a place so sparsely populated. As we saw recently in Slave Lake a wildfire can not only threaten a community it can also destroy good parts of it. I think that was a wake-up call for many who might not understand the power of a wildfire.

Wildfires are a part of the landscape in northern Alberta. To some extent they are natural, of course, and the way a forest renews itself. There is a point where they simply become devastating to the local environment, and I would suspect this fire has reached that point. It takes a long time for a forest to recover from a fire, and such a massive fire will affect a huge area for a very long time.

I'm not sure if anyone who reads this blog has ever seen a wildfire. I have, in northern Ontario, and all I recall is being dumbstruck by the power of it. You feel helpless staring into the face of something that is quite completely overwhelming, and you quickly realize how little power to control the elements we really have. It's quite easy to actually start to think of such a wildfire as a living entity - one that breathes, and grows, and eats, and billows out smoke and flames. You begin to wonder a bit if there is a dragon behind all that fire and smoke as it seems there must be a creature creating it - but the fire itself is the creature.

Sustainable Resources Development are pulling out all the stops on this one. Seven hundred firefighters, forty-three helicopters, forty-three pieces of heavy equipment (bulldozers and the like), ninety-nine command and support staff, and the largest water bomber in the world, are now at work on this fire. I suspect they might actually be a little worried about this one simply due to the astonishing size of it. I'm incredibly impressed with what a good job SRD has been doing in keeping the public informed, though. They have a Facebook page (Alberta Wildfire Info) which is updated regularly and I think has significantly reduced the numbers of rumours and fears that this sort of thing can foster. I have great faith in SRD to fight this fire, but to some extent the size of it now means that we need some help from nature. Some rain would be lovely, even if it just dampens the forest enough to reduce the sparking and help the firefighters to gain the upper hand. I want to take this moment in my blog to thank SRD and all these incredibly brave firefighters. They have their hands full this year, and in case they think we aren't grateful, here it is : you have my eternal gratitude, and I believe the gratitude of every resident of this entire province, too. Keep up the good work, folks.

I don't often share music on this blog (mainly due to fear of alienating readers with my musical taste) but recently whenever I think of this fire this is the song that occurs to me. After this fire is extinguished what will be left in that part of northern AB will in fact be one supermassive black hole - at least for a little bit, until nature recovers and starts the process all over again.