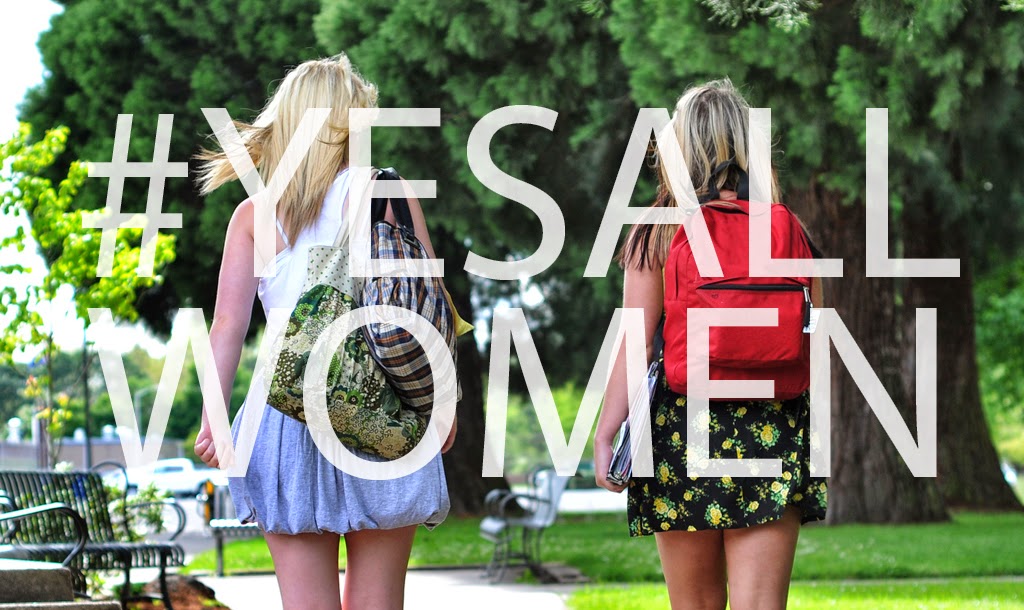 (please be advised - graphic language is used in this post)

If you have been on social media recently you have seen it, particularly on Twitter. The "yesallwomen" hashtag arose in response to the recent shootings in the United States where a young man focused his rage and hatred on young women, and went on a murderous rampage, ending in the deaths of several innocent victims before taking his own life. He blamed his actions on the women who had rejected him, blaming them for his rage and his decision to take the lives of others.

"Yes all women" was a grassroots reaction to his actions, and to violence against women in general. To be honest I didn't give it a great deal of thought initially. I have been quite fortunate in this regard, never having been subjected to direct violence or intimidation based on my gender. Or at least that's what I thought until I spoke to a fellow writer recently who happens to be male.

We were discussing reactions to our written work. He had written something recently and was incensed that someone called his views "idiotic". I expressed some surprise and commented that I have been called far worse, and when he asked what I meant I shared with him some of the names I have been called in anonymous messages and emails about things I have written:

That last one hurts to even type as it was the kind of nasty vitriol one never expects to find lurking in your email inbox, and yet there it was one day.

My male writer friend was stunned into silence. He asked if I realized he had never - not once - been attacked in a manner based on his gender. His views and opinions, yes, but even then the level of nastiness was nowhere near what I had experienced.

It was a learning moment for both of us. As we discussed more I learned he had never been stalked, had never had to speak to the police about frightening emails or messages, never feared for his personal safety, never felt he had to protect his address or phone number, never felt he was being targeted because of his gender - and yet I had felt  and experienced all these things, and so had many, many of the other women I know who write.

Perhaps the worst part for me, though, is the suspicion that some of the nastiness I have experienced came from other women. While on occasion some of it has been from men I think much of it has arisen in my own gender, women who for whatever reason feel given to saying horrendous and cruel things to other women.

Perhaps we are our own worst enemy, I wonder.

But it has happened with men, too, like the ones on Twitter who learned of my daughter's admiration for Justin Trudeau and who dismissed her opinion as foolish because she is young - and female. I was outraged by this, that they felt they could attack her based solely on her age and gender, as if her thoughts and opinions did not matter because she is a young woman.

And I suppose as I thought about it I realized that yes, it is all women. I suspect all women have experienced some degree of this, although not necessarily at the hands of men but simply at the hands of those who attack based not on our opinions or beliefs but on our age, the colour of our skin, our religion, our country of origin, and yes, our gender. And perhaps it is not as simple as "yes all women" but "yes all humans".

So, yes, all women. Yes, this has touched my life, particularly in the last few years, and yes, it has already touched my daughter at the tender age of fourteen. And that is why "yes all women" matters and why it is important to understand - because I want the world to be a better place for her and for all other young women and men, a place where they can express themselves and know that they can do so without fear. Yes, I want it better - for all of us.