Going to Space With Hadfield in Fort McMurray

Until a few months ago she didn’t know what she wanted to be when she grew up.

She would complain about it, in fact, wondering how other kids in Grade Nine could already know what they wanted to be and the career they wanted to pursue. The fact that they had a direction seemed to baffle her – right until she found her own.


She came to me and told me she has decided to be an engineer. I wasn’t surprised, as her father is an engineer, and she has inherited many of his talents. She is a good writer, too, better at 14 than I am now, and so I suppose there was some mild sadness that she would not choose a path I understood better, but I was, as always, completely supportive.
I don’t get math, you see. I like biology, and chemistry, but pure math puzzles me, but not her. She has expressed interest in doing my taxes next year, and she talks about math being fun (whereas I think of math as some form of torture). The only thing that remained, she said, was what branch of engineering to pursue – and then she discovered engineering physics, a discipline that marries science and math, and her path was set.


And then the space talk began.
She started following Chris Hadfield’s exploits in space while he was still there, and I got a daily update on what Canada’s most famous astronaut – perhaps most famous man – was up to on the International Space Station.


I should have seen it coming. After all, this was the kid who saw ice climbing in the Rockies when she was 5 and declared she was going to do it someday. She saw thrills and adventure while I saw small black human specks clinging to a wall and at risk of imminent death. She is the kid who, on the way home from her grandfather’s funeral, climbed to the top of the rock climbing wall at Galaxyland in the West Edmonton Mall, a tiny girl with long brunette hair in a red sweatshirt being cheered on by a crowd who had gathered to witness her determination in doing something she had never done before. It was, in fact, her very first time on a rock wall. She is the kid who wants to go sky diving for her 16th birthday, and who talks about it frequently.
She is an adventurer, an explorer, a brave little soul wrapped up in a petite little frame. And, one day, she came to me and told me she was thinking that one day she would like to go to space.


She read Hadfield’s book, of course, taking it to school with her every day. Her copy of the book, a bit battered from rattling around in her backpack, is the one she took with her last night when she had the opportunity to meet her hero.
Chris Hadfield – famous Canadian, astronaut, musician, fighter pilot and so much more – visited Fort McMurray as part of the NorthernInsights Speaker Series from the Fort McMurray Public Library. This series has brought some near-legendary speakers to the region, from Malcolm Gladwell to Martha Stewart. I have attended every single one, leaving each event both amazed and thoughtful as the speakers opened my eyes and my world to one beyond my own.


And last night Chris Hadfield took us to space.
He is an incredibly gifted speaker, able to make you visualize being inside the space shuttle and about to launch. Through some short video clips, but mostly through his own storytelling abilities, he brought the experience of being an astronaut to life.


It was quite a trip to take in one hour, but we launched in the space shuttle, docked with the Space Station, spent some time hanging out taking photos of planet Earth far below, and then came back to earth (with a thud) on the Soyuz.
And through it all my daughter – the Intrepid Junior Blogger – remained motionless and transfixed. She is often fidgety at these events, but not this time. Hadfield had her entranced, completely wrapped up in every word he said.


Last night my daughter, along with hundreds of other people in our community, went to space with Chris Hadfield. It was one of the most incredible things I have ever experienced, a crowd of hundreds so silent you could hear nothing but his voice and the occasional booming of rockets from brief video clips.
I think a lot of people in that room suddenly wanted to be astronauts, or wished they had been. I suspect many of the children and young adults present suddenly had new or renewed astronaut dreams, realizing that their benchmark of opportunity, as Hadfield called it, included space. And for my daughter I believe it solidified her intent to pursue her own goals, whether or not she eventually circles the Earth from far above.


On the way home she had his book clutched to her chest because now it has been signed. She spoke of how she may not make it into the space program as an astronaut, but that a degree in engineering physics might well allow her to work on the space program developing technology so other people like Hadfield could go into space. It wasn’t all about being an astronaut, you see, although that would be great – it was about being part of something that matters.
I listened in silence, glancing at her and smiling. My little girl, my Intrepid Junior Blogger, hasn’t given up on her space dreams, but they are changing and growing as she does. She is beginning to see the larger picture, the one that sees thousands of people who are needed to allow people like Hadfield to do what he does. Maybe they aren’t as famous, and maybe they won’t end up on the 5 dollar bill – but they are every bit as necessary to make it happen.


She hasn’t given up on being an astronaut. It seems we will be looking at flying lessons, and she plans to pursue the dream of going to space one day, floating far above the earth and gazing down. Her mother, who remembers space shuttles exploding and the dark days that followed, has some trepidation about it all but knows that she would be just as proud as she was on the day when a tiny girl scaled a massive rock wall and came down to applause.
Last night my daughter went to space – and, thanks to the very kind people at the Fort McMurray Public Library, she had the opportunity to meet Chris Hadfield, and tell him of her space dreams. It was a stunning moment in her life, and I am so profoundly grateful to the FMPL staff and their Board of Directors for bringing to life a series that last night took an entire community to space and back.


More than that, though, I am grateful that the IJB had the opportunity to meet her hero – and to explore space, and her future. 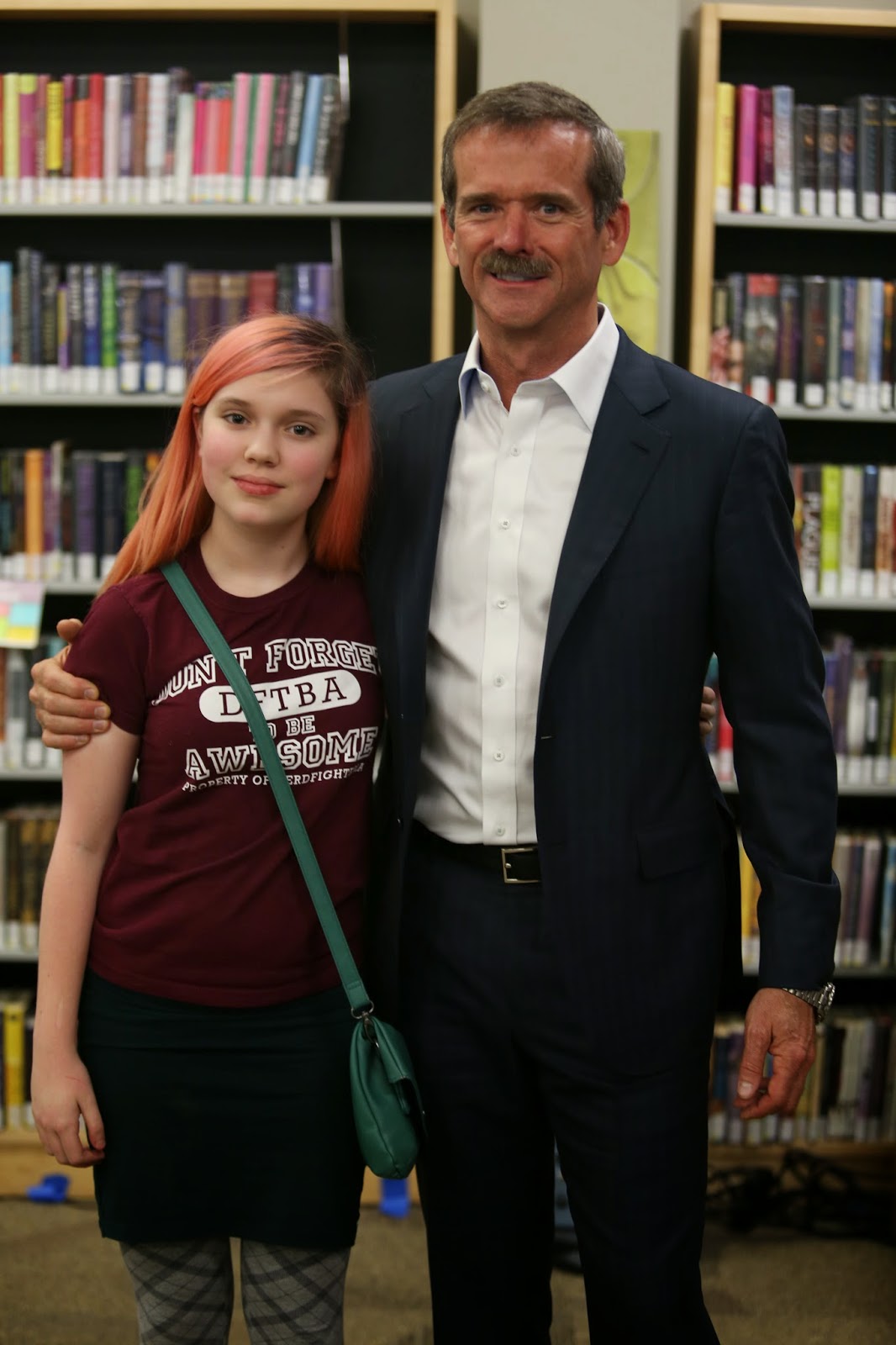