What Is Your Legacy? 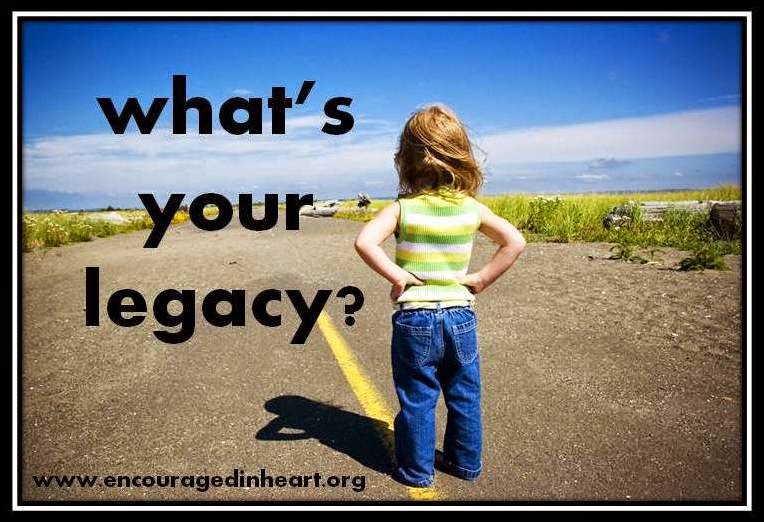 I love when I get emails from people with whom I have connected. Just recently I opened my email and discovered an email from a new friend from Toronto, someone I met on my recent trip and who provided a great deal of wisdom about the difference between crises and tempests, and how to tell which one exists in your teapot.

I thought my new friend would be pleased with what I had written as I hoped it had captured the essence of the wise words he said to me - and so I was a bit surprised when his first words in the email were:

Young lady, you have disappointed me.

Ack, I thought, had I offended him? Had I misrepresented what he said, misinterpreted his words? But he followed it with this:

Your recent article was very nice but you left out the most important thing I said. Do you remember I asked you about your legacy?

Ack. Indeed I had left out a very important part of the conversation. You see we had been discussing the current states of our communities, and the future - and he had asked what I wanted my legacy to be.

And he had another point, too. He suggested we each need to worry about our own legacy, and not that of others. He suggested that if every person looked at their own actions - in an honest and reflective way, through a lens of objectivity - the world would be a better place because they would see the legacy they are building. He said far too many people worry about the legacy being left by others - politicians, athletes, celebrities, etc - and far too little about their own legacy. The legacy did not have to be big and grandiose, as perhaps it would only be remembered by a small number of people, he said - what mattered was not how many remembered you, but how.

It was a sobering email, and he was, of course, quite completely right in that I had forgotten this part of our conversation and had been so focused on the legacy of others - the tempest in the teapot - that I had stopped thinking about my own. Once again his wisdom re-centred me and started me thinking about my own legacy, and how I want the others in my world, whomever I touch in my life, to remember me.

I know this too - my new friend has left a powerful legacy in my life, and has now touched the lives of those who read this blog as through me his wise words have reached an entirely new group of people. That, my friends, is one helluva legacy.
at May 31, 2014