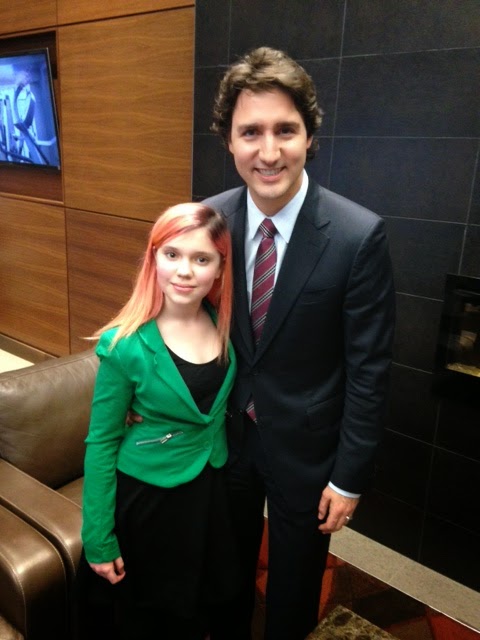 It isn’t every day that a 14-year old gets to interview the leader of a federal political party.
Life for the Intrepid Junior Blogger is far from a “every day” occurrence, though. Oh, she gets up and goes to school and does her chores like the rest of us every day like the rest of us, but she has been very fortunate to have some pretty unusual opportunities during her life in this community – like the chance to interview Justin Trudeau, leader of the Liberal Party of Canada.


The whole thing came together very quickly. Trudeau was coming to town, the IJB is a big fan, we know an editor or two, the kid can write...and suddenly she had a time and date booked to sit down with the son of a famous Prime Minister and speak to him about his own political goals, and about one of her passions – youth in politics.
At 14 the IJB has strong political views, which seem to align fairly closely with the Liberal party. She has followed Trudeau’s ascendancy for some time, and has become more and more keenly attuned to federal politics. The chance to meet him was thrilling for her – but the chance to speak to him was even more exciting.


I was with her when they spoke, and what impressed me most was that unlike many adults Trudeau didn’t speak to her as if she is a child. He spoke to her as if she was there doing a job, which she was, scoring the first major interview in her life (and one many journalists would envy).
Their conversation was amazing to witness, as I what I saw was a skilled communicator speak with a young woman about developing a passion for politics, and for your country. Regardless of what anyone thinks of Justin Trudeau (and he evokes strong reaction, just say his name on Twitter and watch the attack dogs appear) he has a gift for connecting with people just as he did with my daughter.


When she sat down to write the article she only had one complaint:
“Everything he says is a great quote, Mom! How do I choose which ones to use when they are all so good?”


And yet she managed to select a few and craft an article, the very first piece she has ever had published. I won’t say much about the conversation with Trudeau, as it was her interview to report, and so she has courtesy of Fort McMurray’s Child Magazine.
I would like to thank Krista Balsom and Fort McMurray’s Child Magazine for giving the IJB the opportunity to publish this article, and I would like to thank Justin Trudeau for giving her twenty minutes of his time for an interview.


It was only twenty minutes, but for the IJB I think it was twenty minutes that will provide a lifetime of memories.
Twenty Minutes with Justin Trudeau﻿
at May 09, 2014