The Criminal Hotbed of Fort McMurray

Way back in November of 2011 I wrote a post about a story in the Edmonton Sun. The story enraged me, but it was the title that got me really fired up. The story? This one: 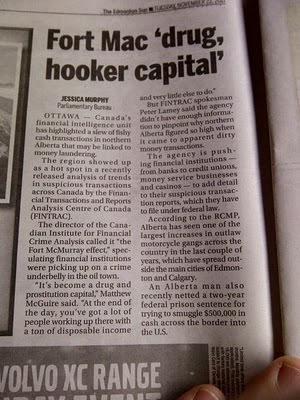 Yup, the infamous "hookers and blow" story, implying that Fort McMurray is a hotbed of criminal activity, filled with prostitutes and drugs and criminal activity of every kind. It was the kind of thing that makes me seethe, with subjective comments about those with disposable income and little to do except spend it on "hookers and blow". The best way to fend off that subjectivity is with objectivity, though, and so when I learned of this report I was delighted:


Crime in the Regional Municipality of Wood Buffalo
What did this little crime study find, you ask? Did it confirm our status as the hooker and blow capital of Canada? Was it an indictment of the criminal hotbed of activity in our community? Did it prove the claims of scads of fly-by-night journalists who write their stories before their plane even lands at the Fort McMurray Airport and only come here to tick the requisite box before handing their piece in to their editor? Hardly. It found this:
Further, over the 10-year period, the region has seen a 47 per cent decline in overall crime incidents, the most significant drop compared to other jurisdictions canvassed by the study. Some notable categories include: break-entry-theft incidents declined 68 per cent, prostitution incidents declined 78 per cent, and cannabis distribution incidents declined 80 per cent.
﻿

The study, performed by Professor Neil Boyd, director of the School of Criminology at Simon Fraser University, prompted him to say this:

“This research aims to present an accurate and thorough assessment of crime rates and trends in Fort McMurray. The study demonstrates, contrary to a number of media reports, that the region is far from awash in crime,” said Prof. Boyd. “I found no evidence to support the notion that there is a greater prevalence of crime in Wood Buffalo compared to other communities in Alberta or Canada.”

Well, well, well indeed! Wait, we aren't a hotbed of criminal activity? Our crime rate is actually DROPPING? Yes, if you include our ACTUAL population, which means including the camp population as these are individuals who use our services and amenities, and for the intents and purposes of these surveys count as residents. Previous crime studies, which did not include these individuals in our population numbers, showed skewed results because their assumption of what constitutes a resident was, in our case, faulty. While our camp workers may call other locations their permanent home this community is one in which they spend a great deal of time. Our population for  must include the residents of the camps who, while they may not be here 100% of the time, do spend significant time in our community. This is one of the unique qualities of our community, and one that those doing these crime studies often omit, hence sensational "hookers and blow" headlines.

Now this is not meant to be a whitewash of our issues, as we have those and we must continue to address them - but the reality is that we are NOT a hotbed of criminal activity, regardless of what anecdotes outside journalists spin to tell their story or what skewed studies are used to support their shaky claims.

And now I finally get to say what I have been dying to say for some time. Suck it, Edmonton Sun, British GQ, Maclean's Magazine and the other media outlets and journalists who have been peddling the "hookers and blow" story for years. Read this crime study - and just suck it.
at March 05, 2014