We are headed into yet another election in this region, after what seems an endless series of elections. Two years ago we saw the provincial election, in the fall of 2013 we went through a contentious and hard-fought municipal election and now, thanks to our former MP who resigned rather abruptly for reasons unknown, we face a federal by-election.

One could get worn down by these ceaseless elections, I suppose, three in less than three years and all promising to have significant impact on our community - but this last one is perhaps the most intriguing, because things that were once taken for granted in this region are not quite so certain any longer.

On Thursday of this week this man is coming to town: 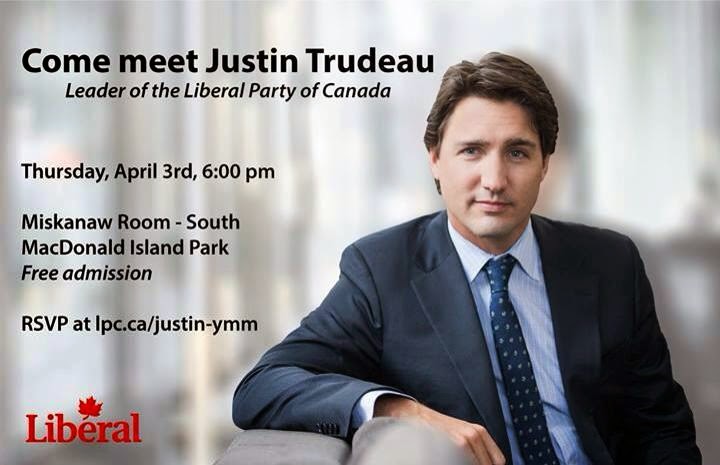 And in my mind he could well be a game-changer for this country. Justin Trudeau, the son of Pierre Elliott Trudeau and Margaret Trudeau, has a distinguished pedigree, no doubt, but he is also bringing new energy and new life to a party that not so long ago was in dire straights. Not everyone is a fan of Justin, or of the Liberal party - but in my household he is pretty much a superstar where the Intrepid Junior Blogger adores him with the intensity other teen girls reserve for that "other" famous Canadian named Justin.

I will not hide that I was a fan of his father's growing up, and in fact I always admired both his parents for their intelligence, their strength of character and personality. I was, much like the IJB, always keenly interested in politics, and politicians who could combine intelligence, charisma and a genuine interest in leaving the world a better place than they found it always captured me. I believe PET was one of those politicians, and Justin seems to have followed in his father's footsteps in some regards - but in others he is very much his own man, too.

The local Liberal Party of Canada has now chosen their candidate in Kyle Harrietha, well known in the region for his political savvy and his understanding of the needs and issues of this region. There are others in the running now too, Tim Moen of the Libertarian Party (and someone who is both a friend and a bit of a political wunderkind, having garnered a significant amount of attention from across North America as he presents a libertarian approach to politics), and Lori McDaniel of the New Democratic Party. The candidate for the Conservatives is as of yet undetermined, but one can only hope that they focus less on creating crossword puzzles about the colour of their hair (don't even get me started on the egregious waste of tax payer dollars our previous MP engaged in while serious issues in this region went unaddressed) and more on convincing us to vote Conservative in this region - because I do think we will need some convincing after years in which the federal government has engaged in some neglect of our region.

There is a great deal of lip service being paid to this being the economic engine of the country, perhaps the most important part of our economy as a nation, and yet woefully little has been done by the federal government in recent years to convince us they believe in our importance. Their input in this region has been shamefully lacking, and their tenure here has recently been marked by inactivity and even hindrance of progress as seen in the debacle surrounding the transfer of the land at Willow Square. I think a sense of complacency has set in, and I have heard that our Prime Minister will not even deign to come here during this by-election campaign, a crucial election for our region - and I think that is very telling. If our national leader cannot come to the "economic engine" of the country during a critical election regarding the future of our region what does this say about our true value and importance in the eyes of the federal government? What does that say about how they view us, and if they might take us just a wee bit for granted?

I must say, though, that as a writer one of the most compelling campaign slogans I have ever heard is the one from the Liberals: "Hope and hard work". You see, hope and hard work is what political campaigns are all about, and I know this well first hand. But hope and hard work is what this region is all about, too, hope for the future and our families and our lives, and the hard work we put into making this a better place every single day. In fact I don't know if there is a place in this country where there is more hope, and where there is more hard work being invested every single day into continuing to be the economic engine of this country. I know I go into this election with hope and hard work, and whatever the eventual outcome is I know we will continue to hope - and to work hard to make this the best place in the country to call home. This election, you see, is just one more chance to combine hope and hard work in Fort McMurray.