The One Road To Link Them All 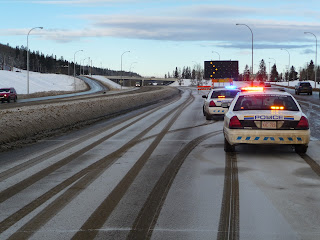 It was a pretty quiet evening in Fort McMurray, especially for New Year's Eve. I was out and about, searching for an open fast food joint that hadn't closed for the holiday. I was driving around downtown, oblivious to the fact that for someone it wasn't such a quiet night. In fact I suspect it was rather noisy, particularly when the load they were hauling collided with the Hospital Street Bridge, pulling down chunks of concrete. I would imagine it was quite loud, and quite worrisome - although the driver in question didn't do what most would do, and pull over. No, they merrily continued on their way, leaving a damaged bridge in their wake. And as they drove away the true impact of such a simple accident - the collision of a high load with an overpass - started to register in this community.

I first heard about it though a media release from the Wood Buffalo RCMP. The release was a bit dire, with warnings of severe traffic delays due to traffic needing to be rerouted on the northbound lanes under the bridge, and traffic over the bridge being redirected as well. Reports of falling concrete had been coming in, and for safety, until damage to the bridge could be assessed, the decision to limit traffic under and over it was made (and rightly so). The reaction on Twitter was almost immediate.

The words "severe traffic delays" strike fear into every heart in this town. There is a terror that goes along with those words, because we are already experiencing severe delays. Anything that threatens to worsen the situation is likely to inspire anger, and the bridge accident did exactly that. Anger was expressed towards the hit and run driver, the possible delay in bringing in an engineer to assess the damage (initially it was suggested that might not happen until January 2nd but actually occurred almost immediately), and, finally, the lack of a ring or bypass road in this community.

You see there is exactly one road running through the heart of this place. Highway 63 is the main artery that connects us to the world, but it is also the link between all our neighbourhoods, between the two halves of a city divided by a river, and between many employees and the oil sands sites. It is quite simply fundamental to our existence and our livelihoods - and anything that threatens that road is very worrisome indeed.

The accident with the bridge concerned me too, but for slightly different reasons. I recognized the potential for short term traffic delays and issues, but I was confident those could be addressed fairly promptly. It was rather the troubling scenarios that this incident raised that worried me, and those worries were far more difficult to address.

As I said we have one road in this community that links us to each other. That road is subject to very heavy traffic, and both industrial and residential traffic share this road, too. There is heavy equipment transported - and there are chemical loads as well, ones of the kind that if spilled could create "problems". And by problems I mean serious issues, and by serious issues I mean danger, and by danger I mean chaos.

I started to think about what would have happened if the high load that collided with the bridge had been a chemical transport instead, and (regardless of whether they had stopped or not) the kind of impact that might have on all of us. And that scenario, troubling enough as it was, was truly only one of the scenarios.

What about all the other possibilities? High loads that damaged a bridge enough to shut it down for months, not hours? What about all the other scenarios that one can imagine? And of course the logical answer is that we need a ring or bypass road, another option for getting those industrial loads where they need to be. But there is a catch, people, and the catch is, of course, money.

We live in a region where we need everything and have virtually nothing. Oh, we have lots in some ways, lots of employment, for instance, but a lack of almost everything else. From retail options to restaurants to commercial space to basic infrastructure we are a decade behind where we should be. This is not the fault, incidentally, of our current civic leadership who are anxiously trying to play catch up after things have been left unaddressed for far too long. They inherited these issues and are now trying to bring us up to speed, but the issues remain. And solving most of those issues requires cash.

The provincial government has committed one billion dollars to twinning Highway 63. We are seeing overpasses being built, and measures taken to improve traffic flow. And now we are seeing the necessity of a ring road, a way to avoid incidents like the one that occurred on New Year's Eve (and those that could be far worse). The hard part, however, is money, and allocating that money.

We are not the only part of this province that has needs, and while our needs are very important, especially given our status as the provincial economic engine, they are not the only ones that exist. Our neighbouring cities have needs too, and they too have projects that need to be addressed, roads to be built and twinned. And while we cry out to have all our needs met so do they, a virtual cacophony of voices begging for money to get things done.

It's tough spot to be in, really. We have so much here in so many ways, and yet we struggle with some basic needs. We forge on with our one road that links us all (for some reason I keep coming back to the thought "the one ring to rule them all" but I think that's because I just saw The Hobbit),  and when episodes such as the one on December 31st occur we bemoan how far behind we are. And we are not wrong to moan, because we do have some significant needs. However we cannot forget that we do not live in a bubble, and there are more needs in this province than just ours. It doesn't change the needs, and it may not lessen the moaning, but it may remind us that we are not alone in feeling such pain.

Oh, and the driver of that high load that damaged the bridge and fled the scene? From last report the local RCMP have some good solid leads on their identity, and I have no doubt they will be caught. This community has eyes and ears, and it will not hesitate to identify someone who not only damaged the bridge but left the scene of the accident, too. The bridge is undergoing some repairs, although apparently some cannot be completed until spring, and so there may be some minor inconveniences to traffic as a result. The real impact of all this, however, is that we have been reminded once more of all we need and do not have. In the final analysis we got off lucky - this time. I imagine however that the next time I am driving on the 63 and see a high load approach a bridge on our one linking road I will shudder a bit and cringe to see if it clears it - because next time we just may not be so lucky.
at January 03, 2013