Of Logging Trucks and Eye Twitches

I've always been very wary of them. I've always tried to avoid them, giving them a wide berth when I encounter one on the highways. When I find one ahead of me, or when I realize I will have to pass one, I find myself developing a stress-related twitch in my left eye, a twitch normally reserved for cross-country moves or childbirth. What are these sources of my eye twitch, those behemoths that figure prominently in my fears about driving? Logging trucks, that's what.

We have a lot of logging trucks in this region, normal given our lush boreal forest and a hungry timber industry. In fact logging is fairly active here, an industry often overlooked in favour of the major employers in the oil sands. While oil sands might be king the logging industry is clearly the prince, and so I often find myself sharing the road with the transport trucks bearing the timber felled from our forests and destined for other places. And while I watch the logs on the truck shimmy and shake my stomach does a bit of the same, going all wobbly with nervousness about logs shifting and falling off those trucks.

Accidents involving lost logs are not all that common, but when they occur they are undoubtedly messy. Much like a dropped container of toothpicks logs spilled from a truck scatter around, blocking roads and creating chaos. Much worse than the delays they cause, though, is the potential for serious injury - and again while not common it does occur. 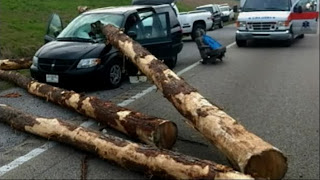 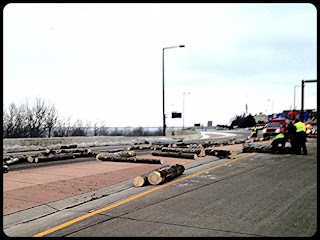 Now to be clear those photos above are not from this region, and not even from Canada. Yesterday, however, a logging truck on Highway 63 lost its load of logs around Wandering River, shutting down the highway and causing a lot of inconvenience. I'm actually profoundly grateful, however, since it could have been much worse. I have heard stories of logs flying through windshields, and last night on Twitter someone shared a story of a log, loosened from a truck after a collision, that flew like a missile down a highway and killed a worker from Kazakhstan.

Apparently the hazard is that as logging trucks travel the logs can shift and settle, causing the restraints to loosen. When this occurs the load can shift again, occasionally enough to cause the truck to roll, and/or to lose stray logs (or the entire load). There are requirements to ensure the load is secured, of course, and companies involved in the transport of logs take this very seriously as they don't want an incident any more than the rest of us (especially given that in the event of injuries or death the liability, both legal and financial, falls squarely on them).

Again, none of the above videos are from this region. I find that rather cold comfort, and late last night as I watched these videos on YouTube my dread of logging trucks didn't really diminish. I know that we must have some faith in the professionalism of drivers and companies, but my faith is a bit shaken every time I follow one of those trucks and find myself mesmerized by logs bouncing up and down, screwing up my courage to get the hell past them and away. And why do I need courage for that? I'm always terrified the moment I pass will be the moment the load will shift and spill over, drowning my car in logs. And while I realize the odds are small and that this is likely an irrational fear I must admit to having it.

And I haven'e even touched on what happens when someone collides with a logging truck, which often involves the logging truck rolling and losing their load. The aftermath photos of those accidents are quite horrifying, as I discovered early this morning at about 3 am (someone should really take my laptop away at midnight). I'd post more photos but I think you get the idea. Just Google "logging truck loses load" if you really need to see more.

I admit I don't know much about the legislation governing logging trucks, but this recent incident on Highway 63 has inspired me to learn. When I heard the truck had lost its load I was quite worried that someone might have also lost their life, but it does not appear this was the case, and all involved seem to have gotten off lucky (and even the highway was opened long before it was anticipated to be). We won't always be so lucky, though, and so I intend to learn a bit more about this not-as-rare-as-I-hoped issue. And frankly I plan to stay as far away from logging trucks as I possibly can, because they just make me tense, and that eye twitch is deeply uncomfortable.

Oh, and while I was cruising the Internet last night reading about logging trucks I stumbled across this video. Yes, a maple syrup spill on a roadway called "Buttermilk Pike". You can't even make gold like this up, people. How I wish we had a street called "Peanut Butter Way" here in Fort McMurray. I swear I'd sit around and wait for a chocolate truck to roll over.