One Raven in a Northern Town 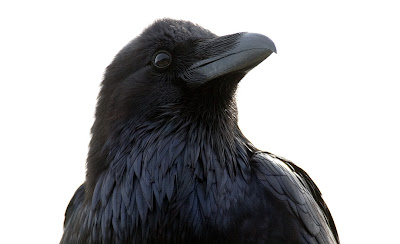 I've always viewed the local ravens with some degree of suspicion. They are undoubtedly clever birds, and you don't have to watch them for long to figure that out. They have an impressive learning curve, able to decipher how to open things that you want to stay shut, and while it doesn't require massive intelligence to open them they always seem to know exactly which garbage bag will a) cause the most mess or b) reveal the most embarrassing things to your neighbours. The ravens and I have really co-existed quite peacefully for the years I've lived here - I've kept my garbage in cans, and they've generally confined themselves to harassing my dog. In the past two years, though, in a new-to-me house, I have encountered a raven that is, excuse the pun, a very strange bird.

I will admit up front that I cannot be certain that this has always been the same raven, although I think I have come to recognize the way he tilts his head at me. I believe there is a certain look in that beady little eye that I have come to know, a mischievous and plotting look. A resourceful look. The look of a bird with a perhaps slightly-larger-than-normal-for-a-bird brain. You see this bird is truly something else.

It began the first winter in this house. I would go out to shovel the driveways (moaning about who had the bright idea to move into a house with two four-car driveways and sidewalks, conveniently forgetting it was me), and settle into the monotonous task. It wouldn't be long before I knew I was being watched, and when I would look up there he would be, perched on a snowbank or the edge of the driveway. Head tilted, one eye looking at me, black feathers fluffed up, the raven would watch me shovel.

He is always completely silent when he does this, no cawing or cackling. I don't feel like he is heckling me, just accompanying me. It is a bit eerie to be watched so closely (the only experience similar is what happens when my dog watches me eat peanut butter, except she drools, too). On occasion I will throw a shovelful of snow at him and he will squawk indignantly and fly off, only to return minutes later. To sit, and to watch.

Initially I thought he knew something I didn't, was waiting for me to keel over and make an easy meal. But in time I began to think maybe he was just lonely, a raven who wanted to be involved. And so I would shovel, and he would watch, and we settled into a sort of uneasy companionship.

Then he began to torment the dog. Now, my dog is easily provoked, I grant you that. This raven, though, likes to sit on the fence, just out of the reach of my dog, and preen. This drives my dog absolutely insane, and there is barking and growling and leaping. When I go out to collect her and bring her inside before the neighbours begin their own barking and growling I discover the raven watching, head tilted, and that look in his eye. He seems to find this all terribly amusing, and I have begun to suspect he has a sense of humour, too.

This December, though, things with the raven took another turn. I was sitting in my living room one day, writing just as I am doing now. The sun was up, and it was fairly early. I heard a scrabbling noise on my roof, and I figured the raven was there, as he seems to like to land on the roof and do a little walk-about up there. This time, though, I was stunned to watch through my windows as a section of our Christmas lights disengaged from the roof line and were left hanging against the side of the house. An accident, I thought, the raven had dislodged them while on the roof. I was wrong.

The next morning I sat there again, and glanced out at the dangling lights, thinking they would need to be fixed. Moments later there was that familiar scrabbling - and then another section of lights dropped. Another accident, I wondered? Not likely - and so I went outside, where, to my shock, my raven was quietly pulling the lights off my house and dropping them to the ground below.

It took him about four days to remove the lights from my roof line. In the end we took them down entirely, not anxious to risk personal safety to put them back up, and thinking that he was so determined that he would likely just remove them again. I have found in the snow little plastic clips, ones that have been broken, and I suspect he was actually removing them with his beak, a very calculated act for such a small brain. I still don't quite understand why he did it - boredom, perhaps, or just a need to do something he felt constructive. Or maybe he just liked the way it sounded when the string of lights banged against the house, or maybe he liked how I stood below and watched him, just as he has so often watched me shovel snow. Maybe he wanted companionship and he knew this was guaranteed to get my attention.

I have always known that ravens are clever birds. It's well documented, actually, with studies showing their resourceful intelligence. And while some despise ravens I have always liked them, and appreciated their abilities and skills. They may have an obsession with garbage, and they may like to scavenge road kill, but I don't hold that against them, really. They do what they must to survive, just like the rest of us, and I am in no position to throw stones when I live in my own glass house. This raven, though? He just isn't the usual bird. I suspect he may be a genius of the raven culture, some sort of raven-ahead-of-his-time. I don't know if any of my neighbours have noticed him, but for some reason this bird and I have developed a strange sort of bond. I do know that he does not accompany others when they shovel my driveway, as they have never commented on a raven companion who watches them, head tilted and beady eyes focused.

It has been suggested to me that this raven is a reincarnation, someone I know from my life who has come back in this form. I don't think I buy that, but I am always open to the unknowns of this world. If it is someone who has come back into this world I think it must be someone who had an exceptional sense of humour, and a need for social company. I cannot imagine who it would be, and I won't even speculate. I suspect that this is simply a bird who gets bored, and who is perhaps smarter than his brethren and therefore chooses to seek out other companions. For whatever reason he seems to have chosen me, and in some very bizarre way I feel a bit honoured. He could have decided to watch anyone shovel, or harass their dog, or destroy their Christmas lights. But this raven has chosen me.

I always wonder if he will just disappear one day, and never return. He does not look young, but he doesn't look old, either. I find myself really wondering what he will do next, though, because I am quite certain there are schemes in that bird brain. And so while he sits and watches me I sit and watch him, because while it seems he is fascinated with me I will be very honest - I am far, far more fascinated by him, this raven who in some strange way has become a part of my life in Fort McMurray. And so it goes, life in a northern town.