This past week I was discussing my thoughts with someone regarding the need in Fort McMurray for a full-service tertiary care hospital, lessening our reliance on medevac services and hospitals in other cities. When I finished saying that I believed we should advocate for and receive that hospital their reply was "well, that'll never happen". And if you want to see fire flash in my eyes and steam come out of my ears those would be the exact right words to say to me, because that defeatist attitude is what has gotten us to where we are today, struggling with inadequate infrastructure and services. That attitude has been what has kept us from growing in the way we need, with all the supports required. That attitude hurts us, people, and it has to change.

I would not call myself an optimist, and nor am I a pessimist. I believe I am a realist, so let's look realistically at some facts:

1) we have an extremely high birth rate, coupled with a high rate of migration into our community
2) we are poised to become Alberta's third largest city (region, municipality, whatever you call it, we will have the population)
3) we are expected to continue to grow at an astonishing rate
4) we are the economic driver of this province - and this nation
5) we are a very young community with an average age of 31

When I questioned the person with the "that'll never happen" response they talked about the difficulties of building a hospital here, attracting specialists and nurses. I was a bit bemused as hospitals in other communities don't just spring up from the ground either, but are created, forged by community will and design. The problem with the "that'll never happen" attitude is that going in with that mindset almost guarantees that it will never happen - in fact it pretty much guarantees you won't even try to achieve anything that seems even slightly difficult. In life, though, it is the difficult things that often bring the most reward, and the most benefit.

So let's also talk realistically about some things that'll never happen in Fort McMurray, shall we?

I could keep on going, but it seems a whole lot of "that'll never happen" are happening right here in Fort McMurray. And why are they happening? Because we believe we can make it happen, and so we do. How easy it would be to simply say "give up, because it ain't gonna happen" - and then that self-fulfilling prophecy comes true because we don't even try. Just like hospitals recreation centres, arenas, airport terminals, and highways don't just spring up fully formed - they come about because we decide we want and need them, and then we just make it happen.

I suppose there is one thing that I can say with some certainty will never happen. Me, giving up on this community, this region, and all of you? Well, about that, folks. That'll never happen. Guaranteed. 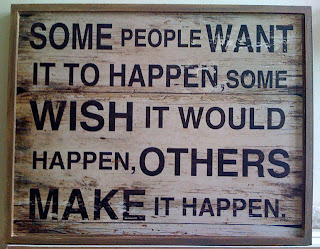