A Dog Sled Team, An Old Fashioned Christmas, and a Parade - A Typical Day in Fort McMurray

On Friday night of last week the Intrepid Junior Blogger looked at me and asked what I was doing the next day. I replied it would be a pretty normal day for me, a few events to take in, some writing to do, some phone calls to make. I asked her if she would like to accompany me for the full day, to experience a day in my life, and she said yes (this was just a nefarious plan to spend precious time with my daughter, you see, who is growing up so quickly). And so Saturday morning found us in the car, bundled up for a day outdoors, and headed to our first stop - the MDRA race track on Highway 63.

The reason for our trip to the track was not motocross racing, but to visit a racer of a different sort - it was a "meet and greet" event for Christina Traverse, the young dog sledder I have written about before. The Intrepid Junior Blogger (or IJB) and Christina have a few things in common, like a deep love for animals, a tenacious personality, and a can-do attitude towards life. In an interesting twist we have known Christina for some time, and the IJB's beloved first pet ferret was once owned by Christina. The IJB was intrigued by the dog sledding thing, and especially by the opportunity to visit the dogs, and so we headed out to the race track on that cold morning to find a bonfire, some marshmellows, some local folks, and Christina and the dogs. 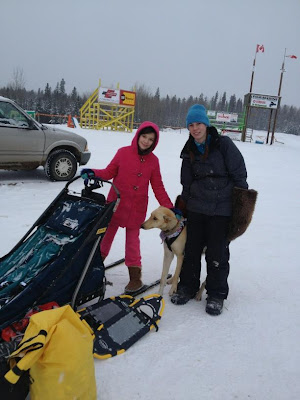 The IJB was in her glory, frankly, surrounded by dogs. She petted every single one, giving each of them the attention they deserved, and then we headed to the bonfire to roast marshmellows and visit. We warmed our fingers and toes, we chatted with the others present, and then in our usual fashion we burnt some marshmellows to a blackened crisp, her shouting for me to "blow it out" every time her marshmellow exploded into flames. We stuffed ourselves with marshmellows and returned to the dogs another couple of times, for more cuddles and more photos, too. 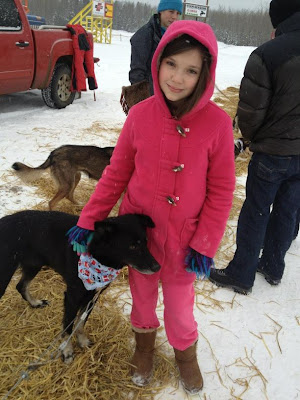 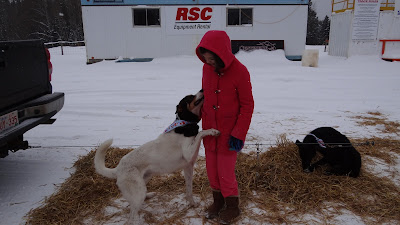 We climbed into the car, frosty fingers and toes, and she asked "where next"? I said "Heritage Park", and off we went to the next stop in our day, Old Fashioned Christmas at Heritage Park. 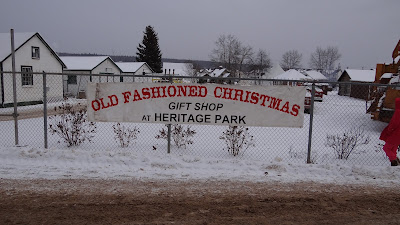 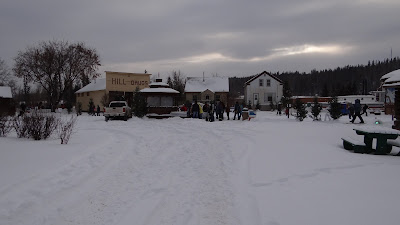 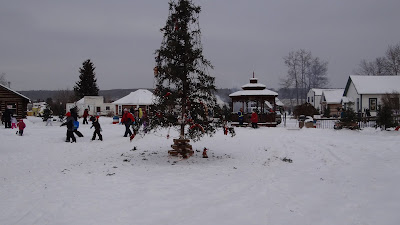 She and I both love Heritage Park at any time of the year, but at Christmas, under a blanket of snow, with Christmas trees and lights, and with horses and sleigh rides, the park is better than ever. We perused the gift shop and then headed into the park, braving the chilly temperature and brisk wind. She refused to have her photo taken with Santa (and frostily suggested that if I was so keen on the idea then I should do it, not her) and neither of us felt up to the sleigh ride given the cold (although so many other people, far braver than us, did). We watched people make "sugar in the snow", and we wandered through some of the Heritage Park displays, finding one that reminded us of our previous stop: a photo of woman and a dog sled team, but from an era long ago. 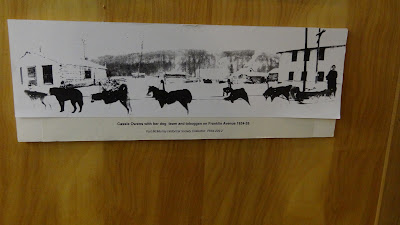 We went back into the gift shop and purchased a few things, a book on local history for me, a ribbon streamer for her (and her ferrets, who she thought would enjoy it, and she was quite right, it produced great weasel mayhem when introduced to them), and one of these mystery bags, printed with a label from Hill Drugs: 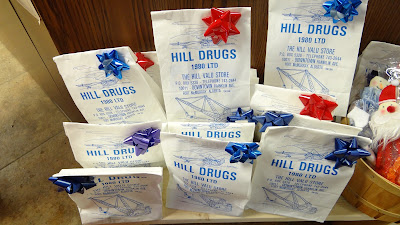 We were both quite frozen, and so we stopped at the local Starbucks and grabbed a  snack and a drink to warm up, and then headed home to pile on more clothing and pick up some blankets for our final event of the day - the Santa Claus Parade. 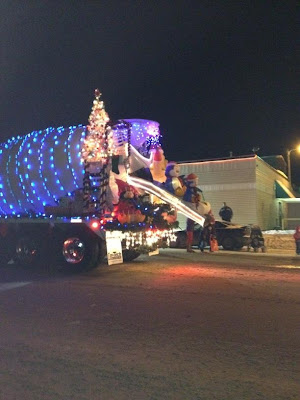 The parade has been a fixture in our lives for the decade we have lived here. On more than one occasion she has been in the parade, and one year we created a float for a local sports group. Last year I had the honour of serving as a parade judge. This year, though, we attended the Lights of Christmas, and watched Mayor Blake wave a magic wand to light all the trees. We sipped free hot chocolate, and then we found a place on Franklin to sit and watch the magic of the parade. We huddled in blankets, me sitting on a snowrow while she sat on my feet in attempt to warm my frozen toes (despite my wearing very sensible hiking boots), and we watched the parade, although not quite until the end. After a day outside we were simply too cold to wait to see Santa, and so we dashed away a few floats before he arrived, beating the post-parade traffic, and headed to a local restaurant.

We sat there, her and I, talking about dog sleds in 2012 and dog sleds in 1924, and young women named Christina Traverse and Cassie Owens, who might be separated in time by decades but linked by an interest in dog sledding, and by this community. We talked about old fashioned Christmases, and what it must have been like for the Hill family to celebrate Christmas in a very different Fort McMurray from the one we inhabit. I told her about the Hill's older son David, who was killed in World War II, and about my great respect for the legacy this family has left in this community. We talked about parades and which float we liked the best, and about how our toes were still cold. We laughed often, and then, finally, she asked me: "So, is this a typical day for you"? I thought about it, and I said "No, not really", and was delighted with her look of surprise when I explained this was a quieter day than normal, and about how many of my days are filled from beginning to end with even far more. She looked at me and said "I don't know how you do it. I'm exhausted", and so we finished dessert, and headed home.

I suppose the answer I gave her was a bit inaccurate, as in some ways it was a typical day in Fort McMurray. It was filled with activity and events, and with people and conversations. It was seeing old friends, and some new ones, too. It was a blend of history and present, past and future. It was seeing people following their passions, sharing their knowledge, and participating in a parade, all despite a frosty day in northern Alberta. And it was far better than a typical day, because it was a day I had the best of all companions, a young woman who makes me laugh and smile. And in the end that is what life in this community is all about. It's about spending time with those people who make us laugh and smile, all while enjoying the things that surround us in this place we call home. It was a typical day in the life of this blogger, and yet it was far more. It was day in my life, with my daughter, in my Fort McMurray. And it just doesn't get any better than that, really.