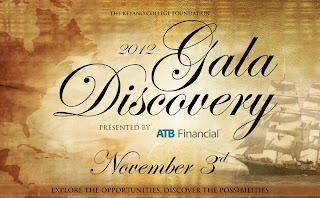 Yes, people, I know this blog about the Keyano College Foundation Gala Discovery is a little late, especially given it happened on Saturday and as I sit to write this it is Wednesday. But you see the day after the gala I was on a Red Arrow bus bright and early, headed to Edmonton (a bit of poor planning, that, as a late night at the gala made a rather grumpy bus traveller the next morning). I arrived in Edmonton and discovered that I was having issues with certain website and internet functions, this one in particular, and so I have been anxiously checking every day to see if I was finally going to be able to share my thoughts - and here I am, so I guess today is the day.

I've written about the Keyano Gala before, last year in fact as it was the first time I ever attended. It is interesting to return to an event you've already experienced once, as you cannot help but draw comparisons. You find yourself comparing the food and drinks and atmosphere and entertainment, and you find yourself trying to determine if this year is "better" than the last. The funny thing is that each year is different - and yet each year the staff and volunteers who organize Keyano Gala manage to pull off a stellar event. This year, Gala Discovery 2012, was no different.

The kind folks at Keyano invited me to attend as media, something for which I am truly grateful. You see, I try to keep this blog revenue neutral, meaning I make no money from it and I try to expend as little money on it as possible (although I have and do buy tickets to various things to experience them with the aim of writing about them). Being invited as media allows me to continue this blog without it becoming a financial issue, and so right off the top I want to thank them for that and that alone. But I have far more to thank them for, too.

It's a bit ironic that last Saturday morning I got in my car very early, when it was still dark, and plugged in my iPhone. My music list, set to shuffle, immediately began to play Honeymoon Suite, and those who were there know that band was one of those who played the gala last year. I instantly got a smile on my face as I thought it must be an omen, a sign of good things to come later that night, and I was not wrong.

As the day went on I began to prepare for Gala. I had an appointment to get my hair done, something I very rarely do, and when that was completed I set about finally deciding what to wear. You see, I had two choices, and I had been torn for days. When I was in Vancouver this summer I had purchased a lovely designer gown, intending it for gala, but more recently I had purchased something that I had fallen in love with. It was an outfit from Nisa Collection, a purveyor of fine clothes from Pakistan, and when I found it I felt like a princess. I took out both gowns, and hung them on my closet doors. And while the designer gown was lovely the gown from Pakistan sang to me, because it hummed with the very theme of the gala. Discovery. Exploration. For me this gown had personal meaning because it sang to me of my journey of discover and exploration over this last year, including forays into our tremendous cultural diversity and all the wonderful people who embraced me when I wandered into their culture from my own. I plucked down the Pakistani gown, put the other back in the closet, and found the most sparkly glittery shoes I own. 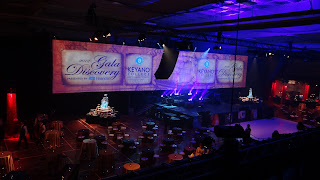 I drove up to the Syncrude Sport and Wellness Centre early as the media got a little advance peek before the guests arrived, and in I walked to once again discover that the facility had been transformed. Somehow they do it every year, take a recreational facility and turn it into a nightclub venue, with an amazing atmosphere, scattered bars and food stations, an enormous stage, and, this year, an enormous screen stretching behind that stage and far beyond. The screen, the largest in North America, allowed everyone a closer glimpse of what was happening onstage, and provided an incredible backdrop that allowed for images of explorers and discoverers to be displayed. The screen, tied in with so many nautical touches from the prow of a ship to themed ice sculptures, helped to create the desired feeling for the gala, a sense of exploration and discovery. 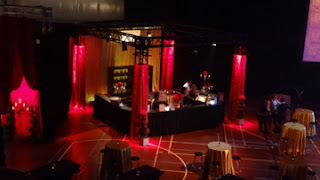 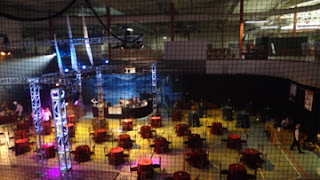 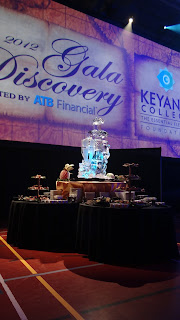 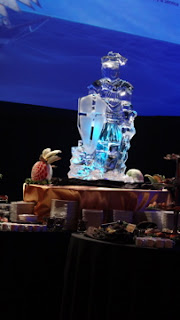 I suppose I should mention the basics, like the food (which was terrific, and I'm genuinely embarrassed to say how many times I visited the dessert station that was entirely too close to my table), and the drinks (I only had the complimentary glass of champagne upon entry, as I was working and taking a bus very early the next day). Every report I heard on the food, which was supplied by Chartwells Catering, was positive, with many of my table mates complaining of unhappy and full bellies and yet appearing again and again with more food. The bars were popular as usual, with many commenting particularly on the scotch tasting bar (an area that was empty when I arrived and virtually impassable for the rest of the evening due to being clogged with people). And then there were the silent auction items and raffles, stunning items once again up for offer. There was the live auction, with trips to Prague and Paris waiting to be won by highest bid (and with auctioneer extraordinaire Ross Jacobs once again burning up the stage as he cajoled, teased, and generally harassed bidders until extracting the highest possible price). There were the usual speeches from those associated with the college, and then, in what was likely the most anticipated moment, there was the live entertainment. 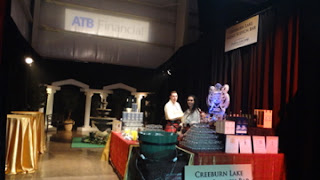 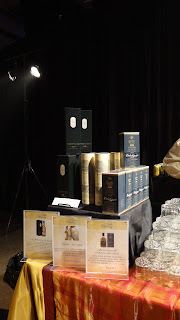 Country band Hey Romeo was the surprise musical opening act, and they played to an appreciative audience, many of whom had seen them before when they have visited us to play. And then the reason I suspect many queued up to buy tickets to the gala this year hit the stage. You see tickets to gala sold out very rapidly, and while I know some of it had to do with the amazing food and atmosphere and drinks and general fun of gala some of it also had to do with a woman that many in the crowd had come to see - LeAnn Rimes. 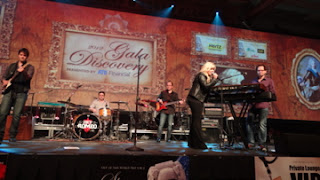 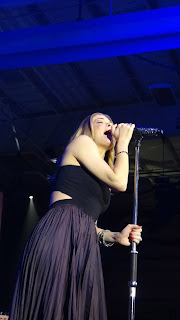 I will admit here, just as I have often before, that I am not a fan of country music. I suppose it comes from a childhood of being subjected to it on long family drives, strapped down and forced to listen to country and western (as it was then known). Instead of developing a taste for it rather the opposite happened (which likely explains my fascination with alternative and punk music as I grew). The thing is, though, that regardless of where my musical preference lies I can recognize talent, and there is no doubt that Miss Rimes has considerable talent. The crowd was gathered around the stage before she even walked up the steps, anxiously waiting for the first note, the first glimpse, the first song - and they were not disappointed when she appeared looking fresh and happy and putting on a stunning performance, if slightly briefer than they'd hoped.

So you see now we are at the part where I am going to say some more thanks. As I said earlier I am grateful for the invitation to attend as media, but I am grateful for far more. I am grateful to Keyano College Foundation for working so hard to pull off an event that I know takes months of planning to execute. I am grateful to them for working so hard to raise money that will benefit the students who gain their education through Keyano College. I am grateful to all the volunteers who make this event possible, who work tirelessly to make it all appear effortless (when reality it is like a duck on water, appearing calm from above and paddling like hell underneath the surface). I suppose, though, I am most grateful to the community that comes out every year and supports events like this. They buy their gala tickets, they bid on the silent and live auctions, they buy tickets for raffles, they buy new dresses and rent tuxes and get their hair done (supporting the local economy), they eat the food and drink the alcohol and dance the night away to performers brought in especially for them to enjoy. It is, I suppose, to all of these people I say thank you, from the staff and volunteers to the community who simply comes out to support it all. In the end, community is exactly this - a gathering of people who share an evening, an event, a cause, and a place that we all call home. So galas might seem to be about food and drinks and music and dancing - but, in the end, they really are all about community. And that, people, is a cause I can always support. 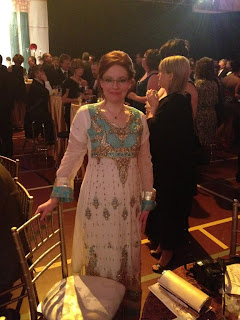