Nothing Gold Can Stay - "The Outsiders" at Holy Trinity 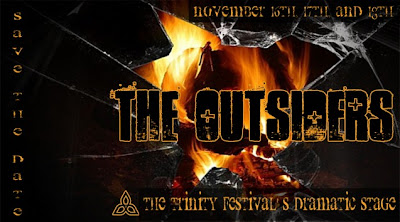 School drama productions can be tricky things. Way back, when I was in high school (way, way back, people) I was involved in high school drama, and I know that these productions take a lot of blood, sweat, and tears to produce. Bringing a story to the stage is always a difficult thing, but when you are working with busy teenagers and teachers I think it amplifies the problems. And then, when you add a story that is a difficult one to tell well you are even further challenged. On occasion, though, the right chemistry of actors and instructors and story are found, and what develops is a blend that is mesmerizing to witness, and a joy to create. And so it was when I went to see "The Outsiders" at the Suncor Energy Centre for the Performing Arts, and saw students from Holy Trinity High School present a story that is not new, but yet still so compelling.

"The Outsiders" is based on a book that is decades old, but even now that book is remarkable. It was written by a very young woman, in her teen years herself, and depicts the story of a clash between other teens, the "haves" and the "have nots", or, in this case, "the greasers" and "the soc's". It is a story as old as time, really, the conflict between groups of us who divide ourselves along some arbitrary line of class distinction or race or religion. It is a touching story, and I have seen various tellings of it through the years, in movies and plays. I was not sure if a high school drama production would have the same impact on me as other productions have had, but I will tell you this - it did. I will admit, in fact, that I cried during the play at Holy Trinity, because the story touched me just as it always has, and because the creation of it on that stage was an incredible thing to witness.

Sometimes it is a challenge to find enough young men interested in drama to mount a production such as this, with an almost entirely male cast, and yet Holy Trinity did exactly that, finding not only enough young men but talented young men, too. Each and every actor was amazing to watch, although each for different reasons and in different ways.

Jd Graveline as Ponyboy brought a touching poignancy to the role, bringing a difficult character, one full of conflict, to life. Richard Faucett as his brother Darry and Jakob Ebskamp as his other brother Sodapop provide just the right blend to depict a family that has faced crisis, and sees a situation grow from bad to worse. Nathan Deagle is perfect as Johnny Cade, a soft and troubled young man, and Tristan Manning shines as the tough exterior Dallas Winston (and one suspects the tough exterior hides a bruised soul). I admit that perhaps my favourite though was Willy Lang as Two-Bit Matthews, who brought both humour and soul to his character (I found myself intrigued whenever he was on stage). Emily Coutu and Zakaria H. Mohamed completed the "greaser" cast, and they too brought life to their respective characters, brief as their stage time might be. On the "Socs" side Amber Nicholle as Cherry Valance and Carmen McGrath as Marcia were just the right touch as young women who are caught in a difficult spot, while Mitchell Mulhall and Logan Aucoin rounded out the cast on that side of the story, once again acting out difficult roles to portray well (and yet they did it, too). The supporting cast - Chantal Murphy, Patricia Gutierrez, Marion Boddy, Erielle Alecs Ganoria, Kevin Hansen, and Guillermo Moronta - filled in all the empty spaces with talent and skill, helping the story to unfold just as it should.

And unfold it did, in front of a very full house. The story is probably familiar to most, one of conflict and drama and heroism and pain, and, in the end, death. It is the story of falling to the lowest point, and recovery. It is the story of how events can occur around us and to us, and about how we react to those events - and, in the end, about how we can try to recover from them, and continue on. It is not an easy story to tell, and even more difficult to tell well - but the cast and crew of this play did a stellar job in telling it, and in sharing it.

In the end the play made me cry, as this story always has. I think of young lives cut short due to conflict, and I think of situations, real ones, in our own community where this has happened. I think about young men and young women feeling trapped by circumstance, and about what happens to the human psyche when you feel you cannot control your destiny but that it is pre-determined by "the way things are". I think about how these young actors brought this story to the stage, and about how it might "just" be a high school drama production, but how it is also so deeply reflective of all of us. And I think about something else, too. I think about my excitement over the future of the arts in this community, because if a high school drama department can mount a play like this then that future is very bright indeed.

It was an honour to see this play, and a pleasure to review it for this blog. I am now very excited for the remainder of the arts season at Holy Trinity, and in a week or so I will be taking in a drama production at another school - this time the one at Ecole McTavish, and a production the Intrepid Junior Blogger has been intimately involved in. She has been working her heart out to learn lines and songs, rehearsing almost every day, and pouring her entire being into a little production of "Annie". So, I know what it is like to perform in one of these productions, as every day I have an actress in my own house who is dedicated to the arts, too.

To the cast, crew, teachers, and all those involved in "The Outsiders" at Holy Trinity I say thank you - and bravo. Bravo for having the courage to tackle a difficult story, and for telling it so well. Bravo for honing your skills and talents and working so hard to create a story that then unfolds for the pleasure of others. Bravo for bringing the arts to the forefront of this community, and bravo for stunning performances that shone. And finally, thank you. Thank you for telling a story that made me think, and even made me cry. Yes, I cried when Johnny died, and I cried again when they told Ponyboy of Dallas' death. You see, even though Robert Frost said nothing gold can stay I think it can - and it can shine like the performances of young actors on a high school stage, telling a story with a modern twist, but that is fundamentally as old as time. 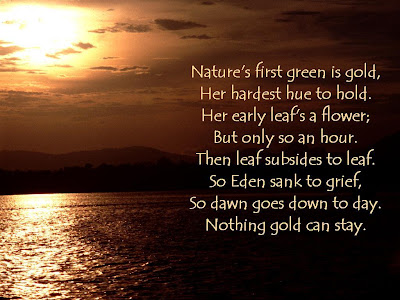