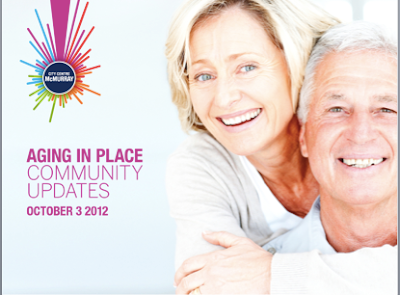 Recently I had the opportunity to view a little presentation on the proposed Aging in Place facility to be built at Willow Square in downtown Fort McMurray. As some may know Willow Square is currently a  bit of an eyesore, boarded up and vacant townhouses, but the vision is to put something there to serve the seniors of this community. And I think this vision is very important. It may surprise some to learn I am passionate about the lives of the elderly, but I am. It's not because I am elderly or even particularly close to being a senior. It's because of my mother.

I am on occasion hesitant to share deeply personal stories, but I will share this one as it puts into context why I am passionate about the concept of an aging in place facility, and about seniors in general. It really all has to do with my parents, and their experience at the end of their lives.

About seven years ago, after a long battle with lung cancer, my father succumbed to the disease. My mother and father had been married for over fifty years, through good times and bad, raising five children, and seeing many grandchildren come into the world, too. They had relied on each other for many years, but in the final years of my father's life it had been difficult for them both. They remained in the large house they had owned for almost thirty years, and when my father died my mother returned to that house. I think that it made it even harder for her, though, because in addition to the loss of my father and trying to maintain a large house (where she lived alone) I think she was quite lonely. That first year after my father died and she stayed in that house was a tough one for her, and so, after that year she decided to sell the house - and move into an aging in place facility.

I imagine it was hard for her. She went from a large house with an enormous garden (which she tended with care every year) and flower beds to a one-bedroom condo-style apartment in a high rise. She lived independently there, making her own breakfast and lunch, but in the evening she had supper in the main dining room with the other residents. And while initially she may have missed that garden and her big house it didn't take long. You see, my mother was a social butterfly just waiting to come out of her cocoon, and soon she was so happy, and perhaps happier than she had been in years.

The years when my father was ill were very isolating, because he couldn't go out often, and she preferred to stay home to care for him. The year after his death she spent mostly alone, going out on occasion but still often alone, trapped by bad weather and snow, or just the difficulty of getting places as she did not drive. But when she moved into this new facility, with recreational activities and group shopping trips and parties and the rest, her social life blossomed.

When my mother had been in her house she was always home when I called, quick to pick up after the first ring or so. But in the new facility I would call and it would ring for ages, often going unanswered. She would call me later to tell of an evening at bingo, or an outing with friends. She was active in the Catholic Women's League in the facility, and even assisted the priest with visits to those seniors less mobile than her. I think, although she did not say, that she even had a boyfriend, or at least a close male friend, as she would mention one widower and always grin when she spoke of him (and he was someone who had grown up with my father and known him, too, so it connected so many things in her life together). She became part of a community within the larger community of her city. She had a place, and a purpose, and a life. And she was happy.

My mother's happiness was cut short when she suffered an aneurysm after having been in her new place for just over a year. Thanks to the staff there she was discovered quickly in her apartment, and taken for medical care, but it simply wasn't a survivable event. The thing I have held onto all these years since her death, though, was the happiness she found at the end of her life. She still had independence and her freedom, but she had support and a community, too. She spent the last few months of her life surrounded by friends and caring staff and a community who cared for her.

This is why I smile every time I hear about our local Aging in Place facility. I want every person to be able to experience what my mother did at the end of her life. I know that her independence, her dignity, and her community meant so much to her. I know that she was grateful to have found a place where she belonged, and where she was embraced. And this is why a facility like the one being proposed in Fort McMurray, where seniors can live out their golden years with independence but support, with dignity but also assistance, and with a community, is so important. It is important because in the end every person there is a bit like my mom in some regard.

I will never forget an incident just after my mom died. We were, in fact, just coming back from the hospital after saying our final goodbyes to her, and she had drawn her last breath on this planet. We were in the elevator headed up to her apartment when an elderly woman entered it and asked how mom was doing. One of us explained that she had just died, and the woman began to cry, clutched her heart, and sobbed, "Oh no, not our Elizabeth, not our Elizabeth," and I knew at that moment that my mother had been loved in this community too, and not just in her family. My mother had found a place where she belonged. She had a home in a place where she had dignity and support and assistance and respect - and love. So now you know why I am passionate about developing a strong and healthy aging in place community right here in Fort McMurray. It's all about my mom. 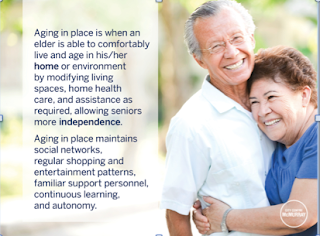