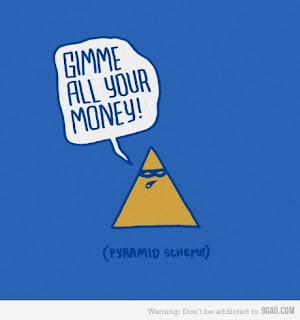 Well, people, this isn't a blog post specific to Fort Mac, but recently I've heard some disturbing reports about a pyramid scheme that is making the rounds in our city, and I thought it deserved some blog space. These things tend to operate under a cloud of secrecy, which is how they flourish, so I thought I'd shine a light in the dark corners and see what skitters out.

What I've heard is that there is a letter circulating that directs you to take $5000 to someone's house, drop it off, and then go home and wait for 8 people to drop off $5000 each to you. It's a bit more detailed than that, of course, and slightly more complicated, but the gist is that there is an easy profit of $35,000 to be made if you just invest that initial $5000. There's a few problems with pyramid schemes, people - the very first being that these schemes are illegal. And yes - they do prosecute people for pyramid scheme involvement.

So, pyramid schemes, or ponzi schemes, are illegal in Canada. You might wonder why something that you choose to do with your cash is illegal, as it is your money. The laws regulating such schemes are designed to protect everyone, as the problem with pyramid schemes is that they collapse, and if you are at the bottom of the pyramid it all comes down on you.

I could go into the mathematics of why such schemes are unsustainable, and you would likely counter with stories of people who have successfully made money on them. The point is that if you are one of the first into the scheme (or the originator) then you might make money - but the further down the pyramid you are the less likely you are to make money, and the potential loss of that initial investment is very real. 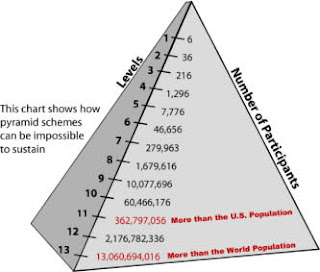 I am always amazed at people who seem to have never heard the adage "if it seems too good to be true it probably is". There is a definite allure to the easy money to be made in pyramid schemes, but there are also consequences. You could lose that investment. You could be prosecuted and lose a whole lot more than that initial $5000. It might seem like "easy money" but I think there's a tremendous degree of stress involved with sitting around and waiting to see who shows up on your doorstep to drop off cash (and what if they turn out to be more interested in robbing your house than dropping off cash, anyhow?). I also think there's a lot of stress involved with hoping no one finds out you've been engaging in such a scheme so you can avoid prosecution. Okay, I get that there is a lot of joy in having a whole bunch of cash in your hand - but good luck trying to deposit that amount into your bank without raising suspicion and some questions (and I don't know about you but I don't want $40,000 in cash hidden in my mattress, either).

So, people, if this scheme happens to target you I suggest taking the letter, crumpling it up, and dumping it into the closest trash can. There is no pot of gold, there is no easy money, and there is no way that a pyramid scheme can continue indefinitely. It will collapse - guaranteed - and you don't want to be the one at the bottom. You have a lot to lose, and very little to gain. Don't get caught up in this kind of game, Fort Mac. You're smarter than that, right?

September 1 update : I received a comment on this post today and rather than just publishing it in the comments section I have chosen to respond to it this way. This is the comment:

Well, I love how people get up in other peoples business. If a person wants to do this, then let them. If you dont want to... then dont.... simple as that. but then there are the nosey people who gripe about everything and make it their business. Its a matter of choice... thought we lived in a free country... which should mean that we could do what we would like... this being a choice that we choose (or NOT to) do... just My thoughts. Ive done my research and made my choice. As im sure everyone in that scheme did as well.


My response is this : I did not write this post to get into anyone's business or as a result of being nosy. My concern is that there are people who do not realize these schemes are illegal, and that these schemes are fundamentally unsustainable. In Canada we have "freedoms", but we are not entirely free to do whatever we choose at all times (and if anyone thinks differently then they've obviously never gotten a parking ticket). There are laws in place to protect us and others. One of the freedoms in this country is the ability to express our thoughts, anonymous, which I have just allowed you to do - and that also means I am allowed to share my thoughts (and, in this case, the facts about pyramid schemes), which I have done. If my post educated one person about the perils of pyramid schemes then I consider it a job well done, and I have no regrets. 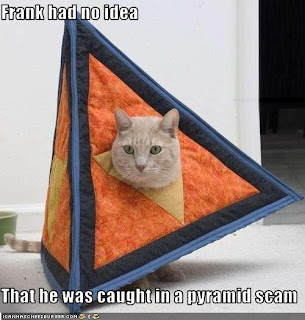