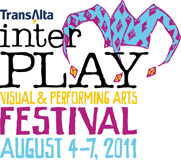 Well, people, interPLAY 2011 has come and gone, and it's all over for another year. Now that I've had the benefit of some some sleep (and loads of coffee) I'd like to recap what I think worked with interPLAY this year - and what might need some work.

First, the major change this year was of course the move to King Street, and I think that it was a decision of pure genius. A street festival and a college are a natural match, and access to the theatres gave the event a true performing arts focused feel. The additional room on King Street meant expansion of the marketplace, more areas for street performers, and less feelings of intense claustrophobia (this was an issue for me on Franklin Avenue where I would sometimes leave simply due to the crowd). The only drawback about this site is noise for area residents, particularly during the evening concerts. I do recognize the event is only once a year, but four nights of loud music might be a bit hard to take, particularly for people who may not even enjoy interPLAY. I'm not sure of the solution for this one, and my instinct as an interPLAY supporter is to say "well, once a year, surely they can cope?", but I don't live there, and it is a concern that may need to be addressed.

One other complaint I heard was about things starting late in the day, after 11 am or so. That seems a natural time to start the plays, but it seems everything (the marketplace, food vendors, music, street performers) all started at that time. It might be nice if some of these things could be open at 10 instead, especially since the box office opens at 10 and you have people (like me) who arrive to collect their tickets and then have nothing to do. This is pretty minor, though, and not a big deal, really, even to me.

Parking, parking, parking. There was tons of parking, people, in the Bob Lamb lot and by Syncrude Sport and Wellness - but no one seemed to know about it or remember it. Those lots were virtually empty most of the weekend, so I'm not sure where people were parking. I think the issue was that where to park wasn't really promoted or advertised, and there were no signs directing people to available lots. This is something that could be easily addressed, and it's pretty much what I expect for a new location still having the bugs worked out.

To be honest I don't have many complaints or concerns. I think interPLAY 2011 went splendidly well, and I think some of the new additions (like the Film Festival) have added immeasurably to it. As with any event there is some tweaking to be done, and some improvements to explore. So many things about this year's interPLAY were amazing, so I'd like to recap those, too.

First, the community BBQ. Sparsely attended this year, as it was a new concept, but a brilliant idea. It seemed right to kick-off interPLAY in the evening, and allowed people a glimpse of what was to come the next day. I do hope they keep this idea going, and hope in future years more people know about it and attend, as I am certain they would enjoy it if they did.

Second, the venues for the plays. I love sitting in a theatre and watching a performance. There's nothing like that feeling, and the more formal setting just seems more fitting. In addition to the venues, of course, are the plays themselves, and this year I laughed, smiled, and, at one moment, even began to cry a bit. This is the mark of true success, people - when an actor can reach inside you and grab your heart, even if just for a moment. I had a lot of those moments this year at the plays I attended.

Third, the expanded marketplace. I spent money there, and I bet many people did. There was something for everyone, and it truly felt more like a festival marketplace than ever before (and there was plenty of room to move around, unlike previous years when I was almost mown down by strollers).

Fourth, the film festival. Brilliant to meld it with interPLAY, and brilliant to add the local aspect of the 48-hour film challenge. If I knew how to use a video camera I might even try that one next year, but technology baffles me and so I will leave it to those who are a bit more technically minded. Regardless, one of my festival high points was watching the 4 films entered in the 48-hour challenge, because it was our residents, and our community, being showcased.

Fifth, the street performers. We somehow manage to attract some world-class acts, like the Aerial Angels, and that they are willing to keep making the trek back here says something about us. We might love them, but I think they might just be pretty fond of us, too.

Finally, and most importantly in my mind, all the volunteers. Every single interPLAY volunteer I encountered was helpful, friendly, thoughtful, and kind. They embodied everything I love about this community. They were there to embrace the arts, to help out a special event, and to serve their community. These people earn no salary, and give freely of their personal time so people like me can hang around for hours just having fun. They have my gratitude and respect, and I think the volunteers are the true heart of interPLAY.

So, there's my interPLAY 2011 post-mortem. I truly believe that this is the best one I have attended in a decade, and I think the potential for continued growth and improvement is unlimited. As our community grows and changes so too will our events, and they will need to do that in order to continue to serve the needs and interests of our region. I am delighted to say that Events Wood Buffalo seems very cognizant of this reality, and have managed to take interPLAY into a new phase. I applaud them, and all involved with interPLAY 2011, for a job very well done. I'm already looking forward to interPLAY 2012!
at August 09, 2011