So, What Are You Doing For Summer's End? 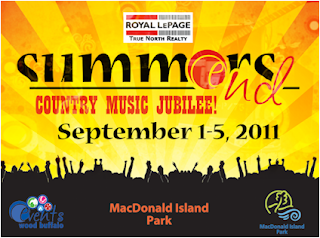 Well, people, as hard as it is to believe the end of summer in Fort Mac is rapidly approaching. I can scarcely believe it, either, but next week the kids head back to school, which is a sure sign of fall in my house. There is one last kick at the can, though, and one last chance to embrace summer while saying farewell to it until next year - and that is summersEND.

Once upon a time the city hosted an event called "The Blueberry Festival", but in recent years the name has changed and so has the event. This year the festival being held over the Labour Day weekend has taken on a definite country flavour, and we will see some very big name acts (Reba, anyone?!?) hit our city. The name has changed a bit, too, and this year we see "summersEND:The Country Music Jubilee" on posters.

Now, there will still be the old favourites - the midway rides, the carnival food, and all the rest, but there is no doubt the big draw will be the concerts. I'm super excited, too, but not because I am attending the concerts. Rather, I am excited because I have volunteered to work with Events Wood Buffalo backstage in order to see what things are like from that side of the fence. I've been an attendee and guest at so many of the events they organize (interPLAY, winterPLAY, etc) that it felt like time to see what goes into hosting them, too. I suspect it's much like a duck on water - calm on the surface, and frantic paddling down below. I cannot wait to be a part of the frantic paddling.

There are still tickets available to the concerts through MacDonald Island, and if you don't have yours yet I strongly advise doing it now. I suspect these will be concerts that will be talked about for a long time to come, and this is an opportunity to both see some great performing artists and show them what our community is about, too.

There is also still a need for volunteers, people. Events like this don't run themselves, and what better way to show the world our community spirit and commitment than to volunteer at such events? Attending concerts and events like summersEND is great - but being involved in them is even better, I think. You get a chance to meet other volunteers and people in our community, you get to see what it takes to host these events, and there is an incredible sense of pride when it is all over and the crowds go home, taking with them memories and joy.

So, I don't know where YOU will be September 1-5, people, but you will know where to find me. I will be at MacDonald Island savouring every last bit of our all-too-brief summer. I hope to see you there, Fort Mac - because summer 2011 is rapidly approaching the curtain call, and you don't want to miss it. It's going to be truly spectacular.