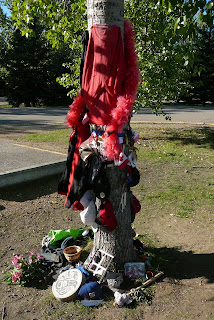 I drove downtown this morning with one thing on my mind. It had suddenly occurred to me that it's been almost two months since our community saw a horrific murder, and I realized that while my summer had marched on to it's usual beat the summer was quite likely very different for many in this city. They had started the summer with a terrible loss, and this loss must still be so very fresh to them. 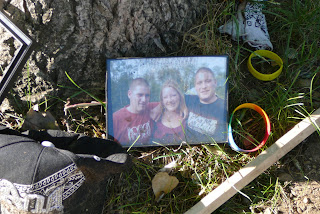 I drove down once again to Borealis Park, that beautiful little park beside the river in downtown Fort Mac. It was so early in the morning that all I heard was the call of birds and the hum of lawnmowers trimming the grass in the park. I pulled up in front of the impromptu memorial erected in honour of the twin brothers murdered earlier this summer, and parked. 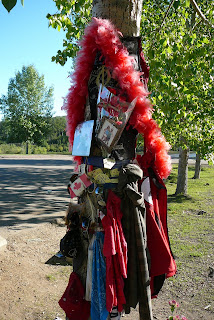 I got out of my car and saw that the memorial has grown since I was here last, just shortly after the tragic events of late June. The memorial has photos and notes, and items left by friends and family that would have meaning for the brothers - cigarettes, a bus pass, hats, and T-shirts. I spent a few moments just studying those items and what it said about these boys, and about their friends and family. It told me the boys were like so many 17-year old boys in our world, caught in a netherworld between boy and man. It told me they were still children and yet on the verge of adulthood. It told me that they were loved and are missed, people. 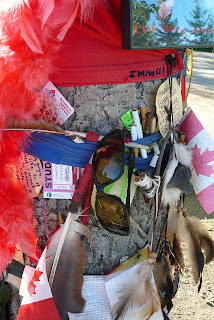 I've heard the rumours about their demise, and how it happened. I still say the cause is immaterial, and I leave it up to the RCMP and courts to sort all that out. I don't really care about the hows or whys - I care instead about two boys who had their future stolen, about a family that will grieve forever over the premature loss of two young young men, and about a group of young friends that have seen tragedy enter their lives far too soon. 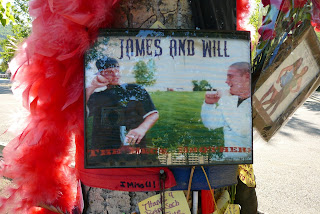 The investigation is continuing. There is not much news on there, and I don't expect there will be until and unless the RCMP make arrests. I have no doubt they are doing their best on that end, but I imagine it must be terribly frustrating for the family and friends of these boys. I am on the periphery and even I am frustrated as I suspect we all wish to see justice. More than frustration, though, I continue to feel deep sorrow over the loss of two boys who would one day have been men, and over a community that witnessed the fragility of life played out in a beautiful park on a Sunday evening at the beginning of summer. As summer ends and turns to fall, and then to winter, the memorial will be covered in snow and many of the photos and notes will fade, and perhaps even disappear. Perhaps some people in this community will forget that Sunday night and the horror of the following Monday morning. That forgetfulness is a luxury the family and friends of the boys will never know. They will never forget. And in many ways our community never will, either. 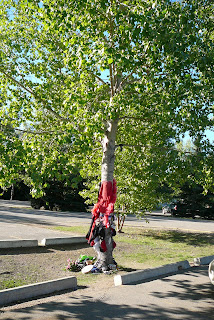